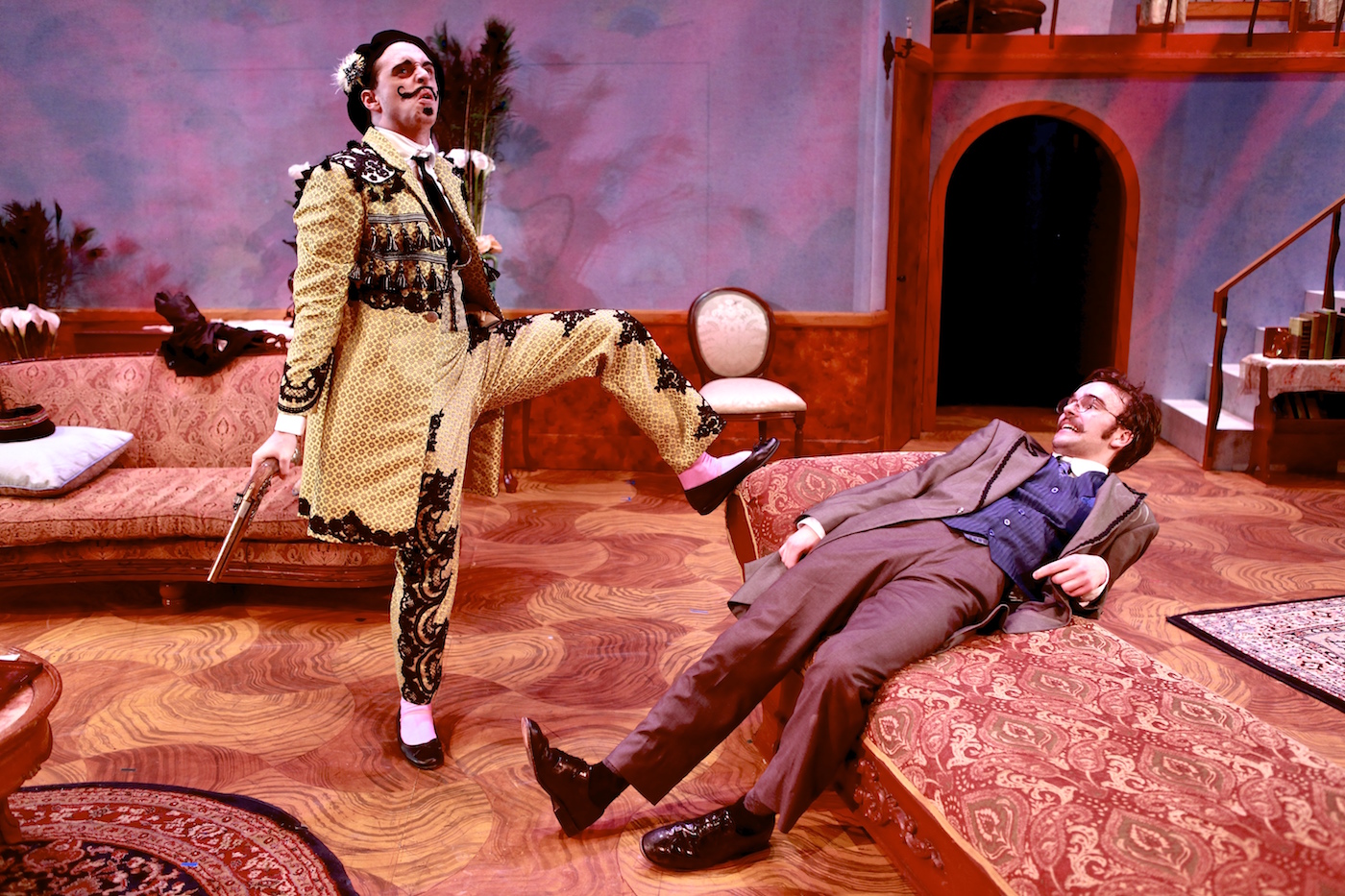 “A Flea in Her Ear” returns to Central New York after a 40-year hiatus.

“Slapstick” is a word in all our vocabularies, but we do not often see slapsticks put to the use for which they were intended, as two flexible pieces of wood joined together at the end, smacked by clowns in pantomime, to enhance a gag and speed along the motion. You may feel you’re being exploited when you hear one because they’re so simple. But they’re disarmingly effective when used sparingly.

You don’t hear them often in Syracuse University Drama Department’s season-capping production of Georges Feydeau’s A Flea in Her Ear. Not to worry, because you’re going to hear plenty of other things not central to the action, like a can-can, a recitation of Malvina Reynolds’ “Little Boxes on the Hillside” and a Bollywood dance.

Like the slapstick, A Flea in Her Ear is often cited but rarely seen. The last local production was in 1976. That’s because of its justified reputation as being damned difficult to do. It’s an Ironman competition for actors.

As it unfolds, we can also see that it is a Götterdämmerung of farce, chock-a-block with every ancient device known to playwrights: ethnic stereotypes, compromising letters sent to the wrong people, philandering husbands, conniving wives, rotating beds that always have the wrong people in them, mistaken identity by having one actor play two roles, and seven slamming doors. This production, with two intermissions, runs nearly three hours.

The phrase “flea in her ear” means one thing in English (forget it), but makes a pun in French. La puce à l’oreille may denote an attempt to invite suspicion or an unacknowledged sexual desire. Well, spoiler alert, that’s the whole thing given away in one line.

The plot, such as it is, centers on lovely young Raymonde Chandebise (Jillian Wipfler), who receives a parcel containing her husband Victor’s suspenders. Did he leave them somewhere? She decides to write an anonymous letter to her husband Victor (Alexander Griffin), who has recently been sexually inattentive, inviting him to an assignation at the Frisky Puss Hotel on the Avenue Coq d’Or. Her lovely best friend Lucienne (Mary McGowan) suggests that she pen the letter, as Victor would most likely recognize Raymonde’s handwriting. Lucienne, however, is married to a violently jealous Spaniard, Don Carlos (Julian Garnick), who dresses like a matador.

Resolving the plot, or even following it, is not what drives the action. In this Flea much of the action is physical comedy, regardless of how it touches the plot. Director Stephen Cross is the drama department’s faculty member most concerned with stage movement as an academic discipline. Every one of the 14 speaking roles, plus the three sexy tumblers known as Fleas, is defined by characteristic postures, body sets or walks.

Many of the characters, especially the stiff-legged, cross-dressing servant named Etienne (Lydia Stinson), could be players in a silent film comedy. David Ives’ new translation fills lines with double entendres like nuts and chocolate bits in a Toll House cookie, such as: “Le Coq d’Or: another name that spells a mouthful.” Yet if all the dialogue was deleted, audiences could still follow the action like a Mack Sennett movie.

Although director Cross drives these youthful actors at a furious pace, there’s a laugh drought in the too-long second act. But each of the 14 can rise to Cross’ demands, mixing ballet, mime and clowning with acting. Long-limbed Cheech Manoher, also the choreographer of the Bollywood dance, could be mistaken for a comic gymnast. His physical opposite, Tyler Lyons as Dr. Finache, is equally lithe. Diminutive blond Catherine Giddings, sporting a mustache, scores as the speech-impaired cousin of Victor, Camille Chandebise. That’s farce: big laughs from a cleft palate.