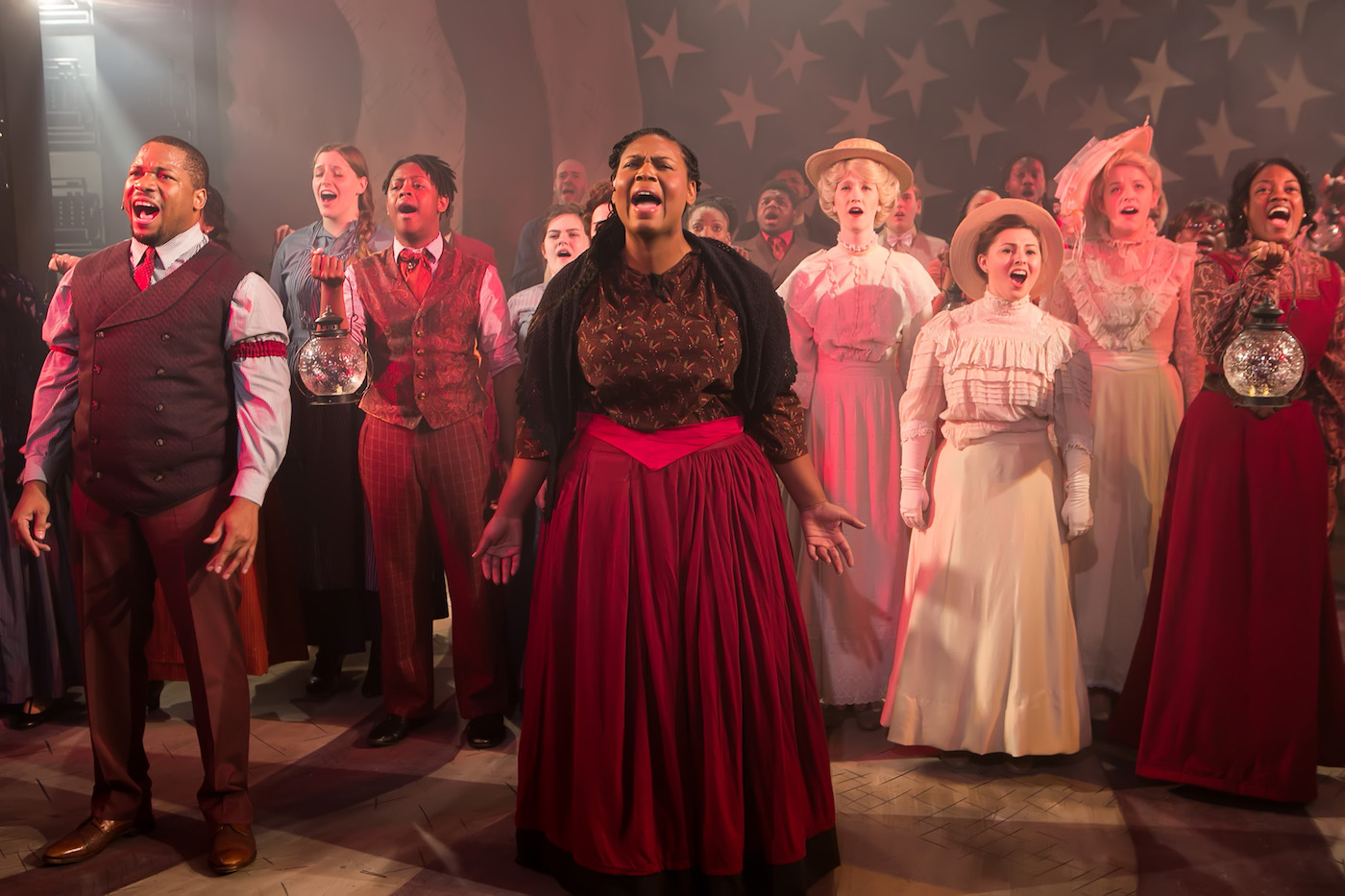 There are 48 players squeezing on to the stage in Stephen Flaherty and Lynn Ahrens’ Ragtime at the Redhouse Arts Center. Their mug shots and bios run 18 pages, while the show itself has sold out its entire run through May 21.

Director Stephen Svoboda’s logistical magic has been dazzling us so regularly we are in danger of taking him for granted. Ragtime is an even greater feat than his The Color Purple (December 2014). But while getting an epic musical on the tiny Redhouse stage is a little like getting an elephant to stand on a stool, Svoboda also makes splendid use of his intimate space.

The affecting dance sequences choreographed by Erin Lafferty — all to ragtime rhythms, all up close and personal — remind us of the delicacy of America’s first popular music to be drawn from African-American idioms. This is not only a justification of the title but an emphasis on the singular art that pulls the whole story together.

This is an expensive show, with trunks full of period costumes designed by Nikki Delhomme, a balcony full of 11 musicians directed by Patrick Burns, and miniature mobile props evoking office equipment (silhouettes of typewriters) or sweatshop clothing mills. Where Svoboda is superior to his budget is in pulling in the right professionals from out of town set next to the cream of community theater.

Baritone Chaz Rose, who arrives with off-Broadway and national credits, gives us a Coalhouse in many hues. He’s a sensitive artist, a tender and caring lover and father, and a ferocious avenger when wronged. Rose also does much of the show’s heavy lifting with its most important musical numbers, like “Wheels of a Dream” (a duet with his lover Sarah), “Soliloquy,” “Justice” and the ferocious “Make Them Hear You.”

Briana Maia, brought in from Connecticut, sings the role of Sarah, taken by Audra McDonald in the original production. She is eloquent and moving in her big solo, “Our Daddy’s Son.”

As the indefatigable Latvian Jewish immigrant Tateh, Patrick Burns brings a dominating stage presence. Our eyes go immediately toward him when he and the others crawl out of steerage. Burns, who somehow doubles as the show’s musical director, also brings a well-trained and expressive musical voice, especially in the key number “Success.” Unexpectedly, he turns into a romantic swain in the second act and also light-foots some dance steps.

The excellence of the hometown team in this professional production warms the heart as much as anything in the story. Radiant, regal Aubry Ludington Panek, a multiple winner at the Syracuse New Times Syracuse Area Live Theater (SALT) awards, has never been more effective, beginning with her early number, “Goodbye, My Love.” Her second-act closing number, “We Can Never Go Back to Before,” fuses personal emotion with history, the end of a marriage and the shedding of stale values.

Black-wigged Carmen Viviano-Crafts, as the heartless playgirl Evelyn Nesbit, steals several scenes, the first with her show-stopping “Crime of the Century.” Versatile company regular David Cotter scores big as the underrated “Young Brother,” a supposed weakling with a lot of nerve. Stephfond Brunson honors the irony of Booker T. Washington, the most admired “colored man” of his time, who was on the wrong side of history. And newcomer Alexandria Parker, known only as “Sarah’s Friend,” brings down the house with the first-act anthem, “Till We Reach That Day.”