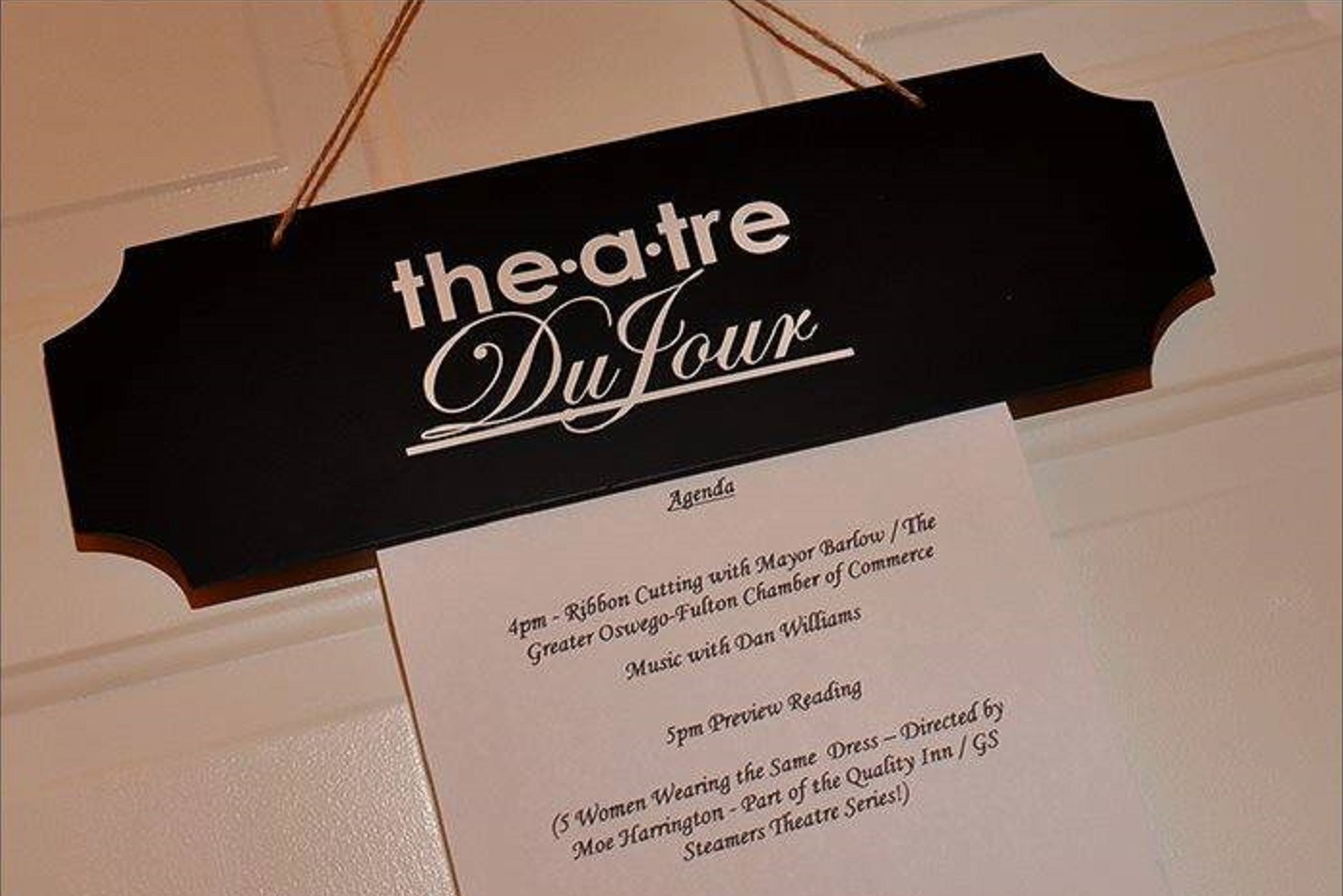 Following its official unveiling in October 2014, Theatre Du Jour (TDJ) served its first production the following February with Love Letters, starring Mark Cole and Banna Rubinow. Tammy Wilkinson wanted to blend the idea of fine food and arts into a tantalizing experience. The result has proved to be a delicious concoction serving well as another vital supporting role in the expanding art scene of central New York.

Over a year and half later, Wilkinson’s company is prepping the unveiling of Five Women Wearing the Same Dress, directed by Moe Harrington, parading the show around Oswego and surrounding areas. On Friday, May 6, Wilkinson; joined by Mayor Billy Barlow and the Oswego Chamber of Commerce, among several others; ceremoniously cut the big red ribbon at the reveal of TDJ’s new headquarters. 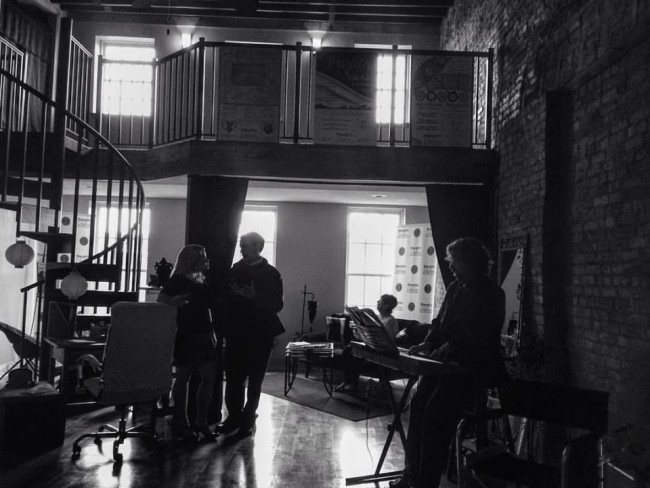 The loft at 169 W. Bridge St. sits quaintly in the Lake Ontario adjacent city. The now-renovated space sat vacant for 70 years before Wilkinson jumped in, claiming it as an office and professional rehearsal space. The multiple paned windows welcome in a significant amount of natural light, which helps showcase the character of the brick wall. The newly installed spiral staircase along with the combination of rustic and industrial aesthetic say much about the past, present and desired future of the building, region and the artistic director’s vision.

Before the mixing, mingling and elbow rubbing, Wilkinson sat down for a moment to talk about her journey and her expectations of running TDJ.

Could you talk about your theater background?

Well, actually, I don’t necessarily have a theater background. I have a background in television and radio, previously working for CBS and FOX when I was in Albany. I branched into marketing and took on a different role throughout that process.

When I was in college I was involved with a few shows on the radio. I took on other roles such as promotional manager.

It wasn’t until I moved to Oswego. In 2007, I scored a lead in Born Yesterday, which was my first show with the Oswego Players. I fell in love with the company and the theater.

Are you still involved with them?

Yes. I’m on the board and have been the producer with them for about five years.

What was your first effort with dinner theater?

We brought a show called The Dining Room to La Parilla. It’s a wonderful A.R. Gurney show where eight actors play almost 60 roles. It did amazingly well, and there was standing room only. I thought to myself, why is this any different?

We marketed it as a dinner theater experience, including a photo booth, music and cocktail hour. People want the whole package. People wanted more.

What difficulty have you experienced?

We seem to want things kind of brought into our radar. Sometimes people don’t find the nichey and wonderful things that are here.

I worked a lot with the Players, the Redhouse, Appleseed and others from 2007 until now. What I was finding was that actors were not necessarily being paid. We did a lot of volunteer work, and most organizations are that way.

My first show in Syracuse worked a six-week rehearsal schedule. I was on nights at the hospital, and I’d go into work after my rehearsals, which ended at 10 p.m. I’d get off at 7 a.m., go to bed and get up to do it all over again. It’s all for the love of theater. 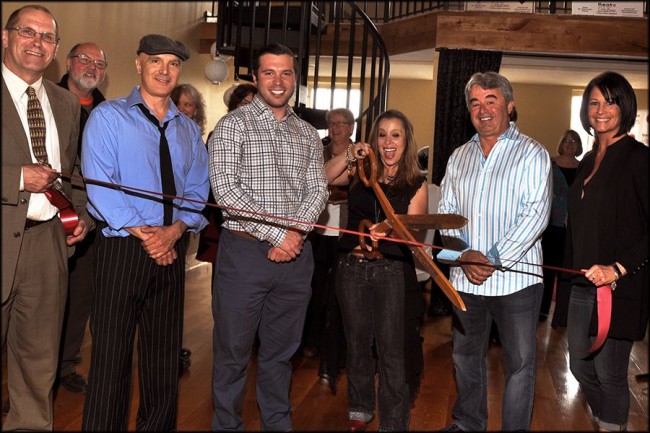 Does getting paid make or break the pursuit of passion?

When I got a little stipend, I felt like I was being acknowledged for my craft. I was really good at certain things, but I never thought this was one of them.

To get paid when doing something that I love, and I thought about all the actors and directors out there, that’s important. It’s another piece of this: Where we are able to pay our actors, even if it’s a little something. They give so much of their time.

Was that the convincing moment to open TDJ?

It was as if the universe was telling me I was on the right track.

Also, when I came to the Barnes Hiscock Mansion to see (Covey Theatre Company’s) Lizzy Borden Took an Axe, I was in the process of DBA-ing. I loved watching the interaction of the show. I respect Garrett (Heater) very much and think he’s amazing.

Are you open to any venue?

Yes. We really know what we’re doing whether it’s the bistro downtown, which seats 40, or Colloca’s pavilion, which seats 90. We’ve done conference centers, Battle Island, Kristen’s Kitchen and Mohegan Manor. We have a wonderful venue list.

We adapt to the room. Each venue has its charm and its challenge. It’s cool. We’ll go into a venue and will strip it down. We’re not schlepping in a lot of stuff. The set is minimal, but we still have to bring the show to life. I believe in letting the audience use their imagination, but I also know they need some skeleton to do that.

Which facilities are you working with?

Broadwell Hospitality brought us in and told us they wanted to collaborate with local, new businesses. They took on four of our shows, which are taking place at their facilities. The Eis House is doing the same thing, calling it a series and taking on three of our shows. We’re doing Shakespeare outside, because they have a gorgeous outside area. We’re adapting to each venue.

This is a big thing for us. This is our second year. Last year we winged it and asked places if they’d like to do a show. This year it’s different.

Venues typically want us on days they’re not doing business; not so much on a Friday or Saturday, but they love us Sunday through Thursdays. Each place is different. We’re flexible for the venues.

What about the food? Do the venues provide their own or do you bring it in?

We don’t deal with the food, but we’ll collaborate with a restaurant … but it doesn’t have to be dinner. La Parilla wanted to do Shakespeare outside, to provide tapas and wine. When Five Women plays at the (Barnes Hiscock) Mansion, they’re bringing in coffee and dessert. Colloca Estates wanted to have a wine pairing. That’s what’s cool: We can get as creative as we want.

What kinds of shows do you aim to do?

We like to stick with 90-minute shows. I’ll contact Samuel French and ask about their most popular and interactive shows. Comedies and murder mysteries work really well, because people love and ask for them.

When we first started, Love Letters was on Broadway, and I was able to check it out in New York. Since we performed The Dining Room, it seemed like a great idea to bring to the Players. Since it is a two-person show, it would have worked better in a smaller venue. La Parilla and the Bistro would be perfect venues, and it worked. The shows were sold out.

We brought it back this year for Valentine’s Day with Cole and Rubinow, and performed it at Greenwood Winery.

I look forward to everyone putting great theater out now. I try to go see as many shows as I can and soak it all up. I’m dying to see Ragtime at the Redhouse, and I can’t wait to see what they do with their move.

Now it’s figuring out where we fit. It’s exciting to consider getting rooted here and figuring out how we can serve the community, how to collaborate with other businesses and the Chamber.

I don’t mind falling on my face as long as I can get up and do what I have to do. I’ve worked in a lot of situations throughout my life, raised my siblings and I’ve never had a job to jump out out bed for until now. I love this. If you go somewhere every day that makes you feel good, it doesn’t feel like work.

A Really Big Show In A Not-So-Big Space
Fresh Music Friday: Vaud & the Villains
To Top