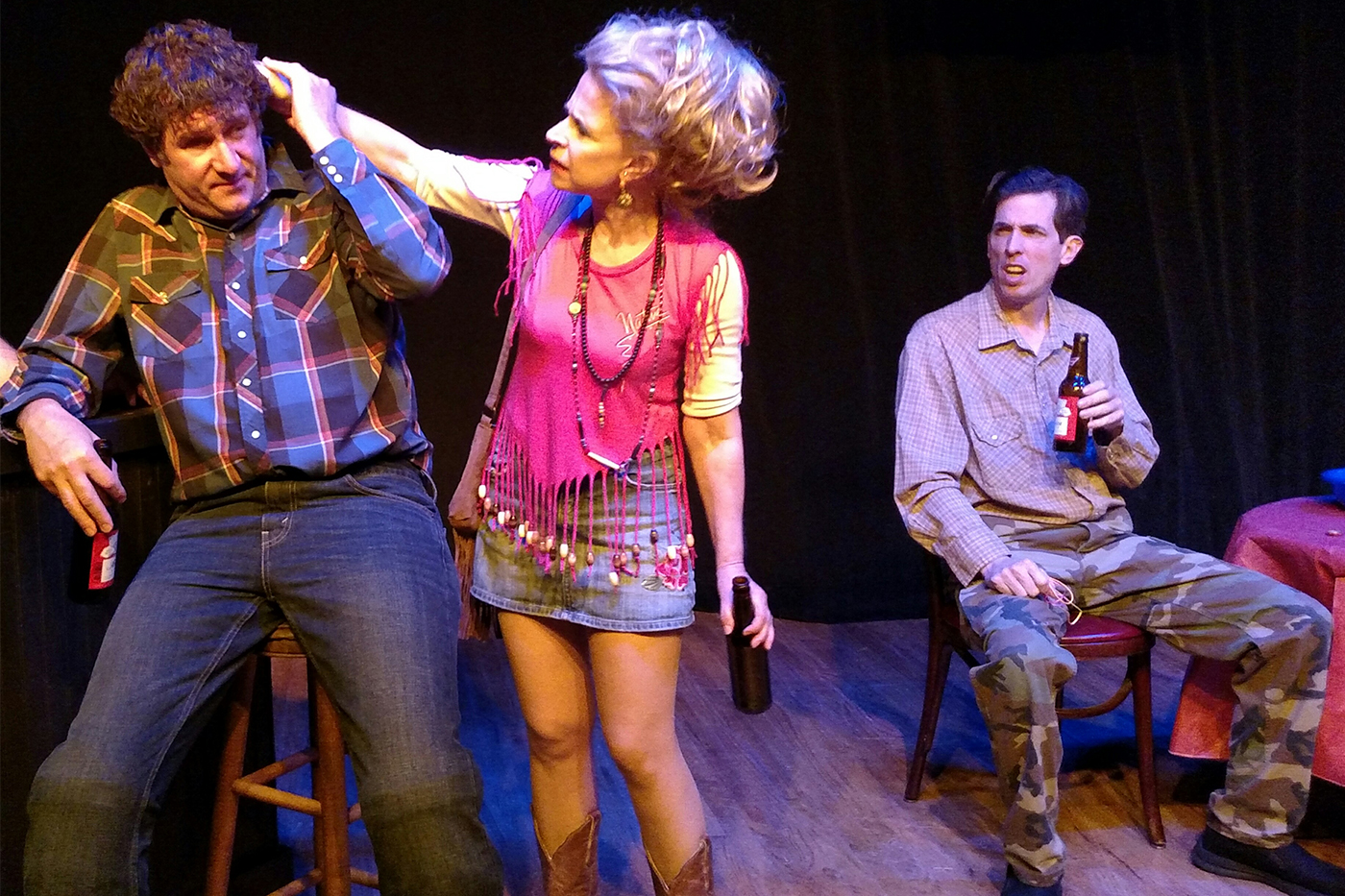 As Del Shores’ black comedy Sordid Lives begins, Grandma Peggy’s sudden death sets off ripples through the family. She was enjoying a tryst with G.W. (Steve Gamba) when she tripped over his disconnected legs on her way to the bathroom at a bargain-rate motel. Notably upset is Peggy’s daughter Sissy (Tina Lee), of the big hair and white cat’s-eye glasses, but she is fired up further by her best friend Noleta (Robin Carruthers), who is G.W.’s wife.

Angrier still is tidy, blue-suited uptight Latrelle (Heather McNeil), who’s boiling over to think that Peggy might be buried in her mink stole in such hot weather. Farther afield is Latrelle’s estranged son Ty (Michael Riecke), an out-of-the-closet gay actor in West Hollywood who dreads returning for Grandma’s funeral in Texas and a certain hostile reception.

Dan Tursi’s Rarely Done Productions comes by its moniker honestly because Sordid Lives (running through Oct. 22 at Jazz Central, 441 E. Washington St.) is a raucous, edge-busting comedy that would be unlikely to turn up on any other local stage. The current production is a reprise of the legendary 2006 version, one of the all-time laugh-riots of the company’s 12-year history. Many members of that cast return here, a bit more wrinkly but with what feels like sharper timing.

Del Shores is a longtime television writer (Dharma and Greg, Queer as Folk) whose Sordid Lives was an SRO hit in Southern California and later turned into a bust of a movie (2000) with Beau Bridges and Delta Burke. It hasn’t gone mainstream, and this production appears to be one of the few anywhere this season.

With 13 speaking parts and several abrupt shifts in the action, Sordid Lives presents a small challenge to remember who did what when. To ease us through this distraction, Shores gives us two narrators. One is female troubadour Bitsy-Mae (Melissa Sieling), who sets the tone by inserting pre-existing songs on Southern themes. The estranged Ty tells much of the backstory about differences among family members, such his judgmental mother Latrelle against earthy, free-wheeling LaVonda (Theresa Constantine), as well as the ultimate pariah, Earl “Brother Boy” Ingham (Bryck Bergman), who has been institutionalized for 23 years.

As Sordid Lives portrays redneck Texas from an urban, gay point of view, it’s curious that the gay characters turn out to be the serious ones. Riecke’s Ty is anguished and earnest, for example. The straights, on the other hand, overflow with hilarity. Tina Lee’s Sissy, who fans herself above and below for relief from the heat, pops up gags more reliably than anything in the cast. The farcical themes reach a first-act climax when wronged wife Noleta and blowsy LaVonda impersonate Thelma and Louise, while the adulterous G.W., barkeep Wardell (Robert G. Searle) and fatuous brother Odell (Christopher James) dress as women, with earrings, lipstick and bras.

The second act goes in directions we do not anticipate. The prudish Latrelle turns out to have a heart, inviting actress Heather McNeil to convince us there was love under the bile all the time. The showstopper is Bryck Bergman’s Brother Boy, aided by the failed dehomosexualization therapist played by Erin Williamson. His faced whitened with makeup, Bergman delivers a splendid recreation of a tears-through-the-laughter Pierrot. Throughout the production, costume designer Debbie Ritchey’s Dollar Store discards ensure Sordid Lives’ authentic ambiance.

Octagonal Soul: Bobby Green at 80
Hupp to the Challenge
To Top