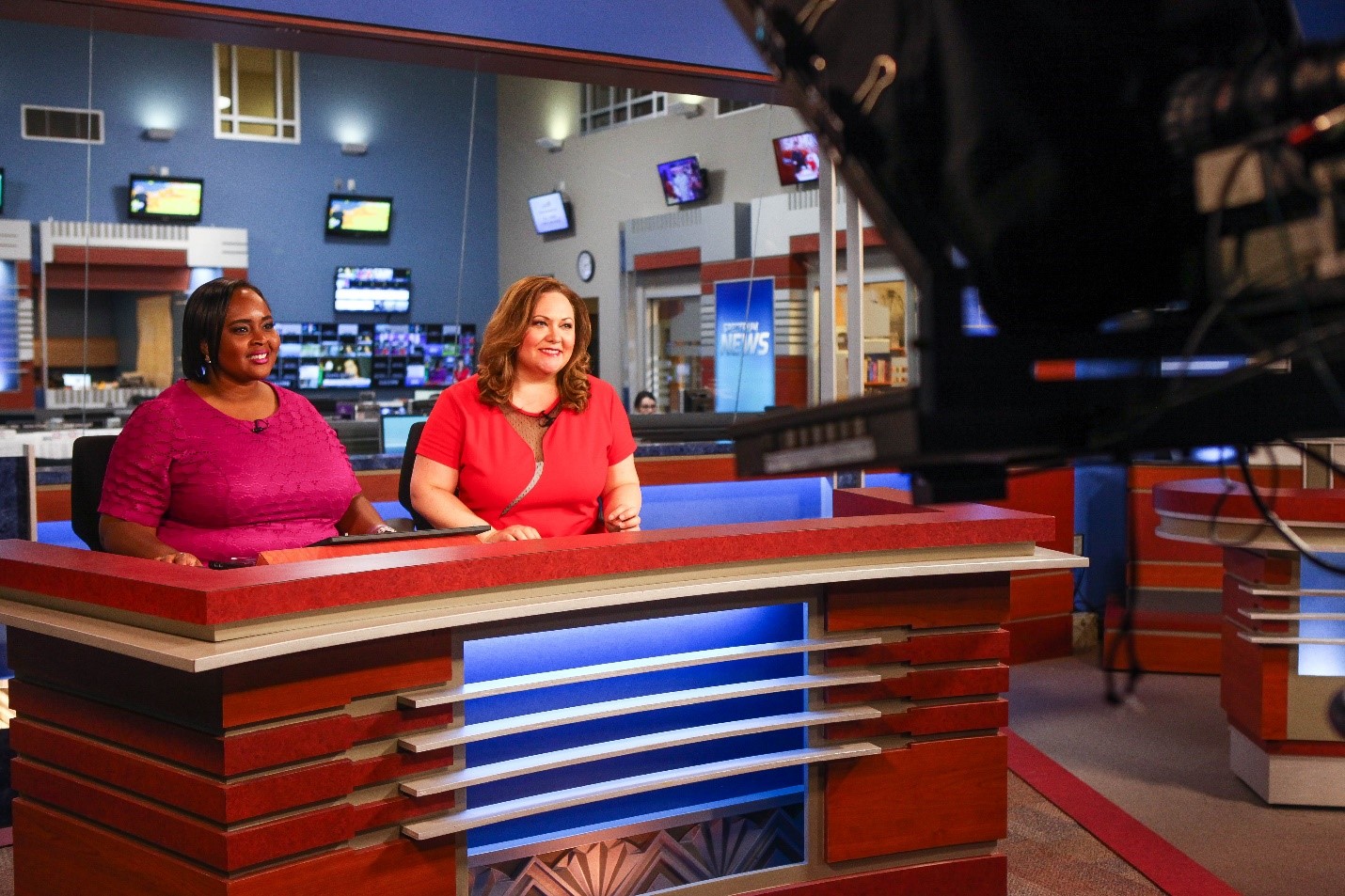 On May 5 during the 40th annual Syracuse Press Club Awards ceremony, WSYR-Channel 9 reporter and weekend anchor Tammy Palmer earned a number of awards for her station, as well as snagging several prizes during the evening’s frequent raffles.

On May 29 Palmer channel-surfed up the dial ever so slightly, as she switched from local broadcaster WSYR to cable television to host the evening segments on Spectrum News’ channel 10.

Following her seven-year stint at Channel 9, Palmer is back at her former stomping grounds, inside the former train station turned TV station on Erie Boulevard East. She now occupies Spectrum senior reporter Bill Carey’s newsroom desk, which had remained untouched since his August 2015 death. Palmer is part of the on-air transition team that will now re-emphasize local anchors, instead of relying on broadcasters employed at Spectrum’s Albany base.

“This is the third time I’ve hired Tammy,” notes Ron Lombard, longtime news director for the Syracuse Spectrum operation. “The first time was when she was out of college at Channel 9 as an investigative researcher,” back when Lombard was news director for that station. “The second time was in 2003 when we launched Time Warner News; she was one of the original veejays.” 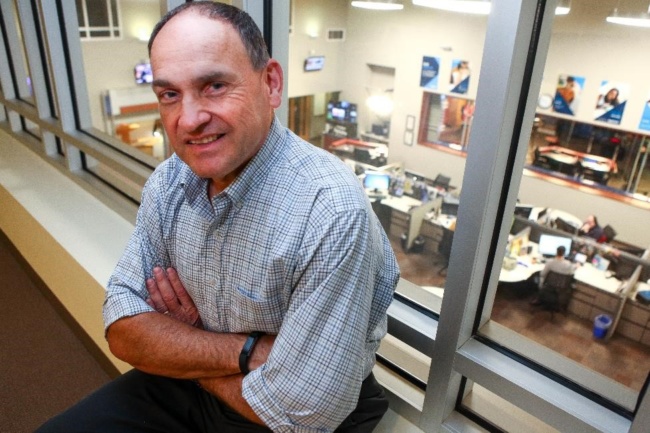 It was anchors away from this market in 2005, however, when Time Warner consolidated the Syracuse operation with the master control setup at their Albany hub. That decision resulted in on-air personnel such as Palmer relocating to the state’s capital region. The meteorologists stayed in Syracuse, including some forecasters that have been at the station from the start, such as greenscreen veterans Michael Gouldrick and Carrie Cheevers.

The 2005 move “was really designed for efficiency,” recalls Lombard. “The technical hub remains in Albany so we haven’t split that apart: The control rooms are still there, the technical staff that has been working for us wonderfully since 2005 are still there.”

Lombard credits Spectrum (a brand of Charter Communications, which acquired Time Warner Cable in May 2016) with bringing back the station’s original concept. “I think they felt it was a good idea to have the anchors back here and just to improve the content. The previous model worked for what it was, but we’re thrilled to have the anchors back in town and anchoring from our studios.”

Palmer admits, “There’s a reason why I’ve come back to work for Ron three times. Obviously, he’s a great guy to work for. He’s been around a long time, has a great news sense, and he’s a good leader. I’ve always respected the direction he’s taken his staff into, and how much time he’s put into them, even outside of the product.”

Palmer will staff the nightside shift, while Iris St. Meran will hold down the midday slot. St. Meran will also continue with her 4:30 p.m. half-hour live news broadcast, which began in March 2017.

“Viewers have responded to it very well,” says Lombard. “I think it’s a good showcase for what we do well. It’s a regional show and it covers our whole footprint including the Southern Tier. And 4:30 p.m. is an interesting time period for us, because it’s the only time in all of the six markets that we compete in where no one else is doing local news.”

An unnamed morning-drive anchor is also slated to come on board later in June. “He’s coming from outside the market but he has local connections,” Lombard says. “He’s a good, experienced, seasoned professional.” Whenever this newbie begins his run, viewers will likely no longer see the current Albany-based dawn patrol tandem of JoDee Kenney and Julie Chapman, although Albany hub anchors will still be doing weekend shifts for the Syracuse market.

The accent on local anchors will also mean they will be available to attend more area events. “Although our anchors have always come over from Albany for the New York State Fair, obviously having them here in town makes things a lot easier. I definitely want to get them out there,” Lombard declares.

“And Tammy already hit me with a list of appearances she had scheduled, which she is going to continue to honor. The first day she was on our payroll she had a four-hour career day at the Fulton School District (at G. Ray Bodley High School, Palmer’s alma mater), and I said, “Yeah, go for it! That’s a good first day at work!”

Palmer says with a laugh, “I knew it was a priority with Ron because I’ve worked with him three times before, so I knew that he would want us to do a lot of those public events.” One such event will be the annual Syracuse Take Steps for Crohn’s Disease and Colitis Walk, which takes place Saturday, June 9, 9 a.m., at Onondaga Lake Park’s Willow Bay shelter. Palmer, who has struggled with the effects of ulcerative colitis, will again head her Colon Crusaders team for this fundraiser. For information, visit ccfa.org.

With the channel about to celebrate its 15th anniversary, Lombard recalls with fondness how it all began. “I had a great 15-year run at Channel 9, but when somebody says, ‘Hey, you wanna launch a 24-hour local news channel in your hometown, and have these kinds of resources,’ how can you turn that opportunity down? So it’s been a great ride: We got it going, we’ve been through different morphs and changes, but it’s all been good. 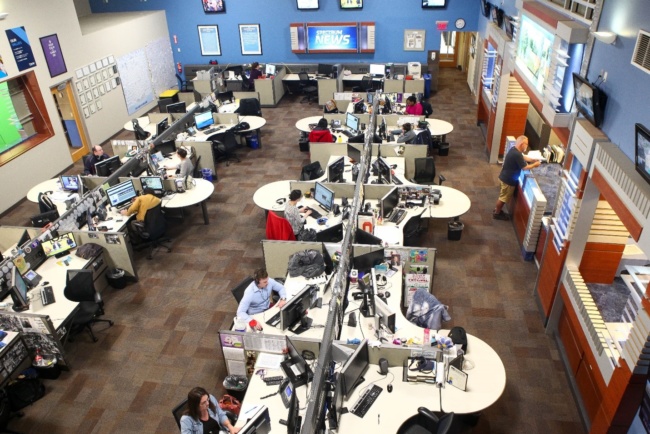 “Everyone busted their neck to get this thing launched, but if you hire well and bring in good people who are as committed as you, it makes it that much easier for everybody. We’ve always had a very strong newsroom station culture and that makes a difference.”

Aside from the prospect of receiving free cable, Palmer also has personal reasons for returning to the channel — and contrary to Thomas Wolfe’s wisdom, maybe you can go home again.

“I was here when they launched and I was assigned to the first story on the air about a reported missing woman,” she recalls. “And my aunt called me and said, ‘You were the first story!’ Because it was a big deal then to have a new television station launched in Syracuse and it was really exciting to be a part of it. And I knew that I would never ever have a chance to do something like that again in my life.

“Like Ron, we both left Channel 9 to be part of this venture. And once you do it, you have ownership in it. I remember Ron saying to me years ago, ‘This is my baby,’ and we’ve all adopted that feeling.

“When I put pictures on Facebook and social media about coming back here, I heard from so many reporters, producers and managers who were here when we launched. And they were saying how happy they were to see me back here, because they went on their careers in other ways but a little part of this station always stayed with them. I think that kind of special connection only happens when you had a part in creating something like this.”