Koolakian Menswear has been in Syracuse since 1905. Current owner Ed reflects on the changes in the city and the fashion world.

In 1905, George Koolakian opened a tailoring and coat-making shop overlooking the Erie Canal amid a downtown focus of activity including Hanover Square and Clinton Square. Current owner Edward Koolakian, 70, has been on the downtown Syracuse scene since 1970, continuing the family’s tradition that began when George brought Edward’s father and his uncle Haig into the business in the 1920s.

Edward’s reflections on that tradition conjure a sense of history, with buildings dating back to the mid-1850s, many even earlier. “As a youngster,” he recalls, “I would come down to my dad’s store in the mid-1950s. One of my first things was the restrooms where the fountain is. Back then it looked like a subway station. One side was ladies’, one side was men’s. It had an arched entry and you would walk downstairs to the bathrooms. It was unusual. You wouldn’t see that in the suburbs. That was my first impression of Hanover Square.” 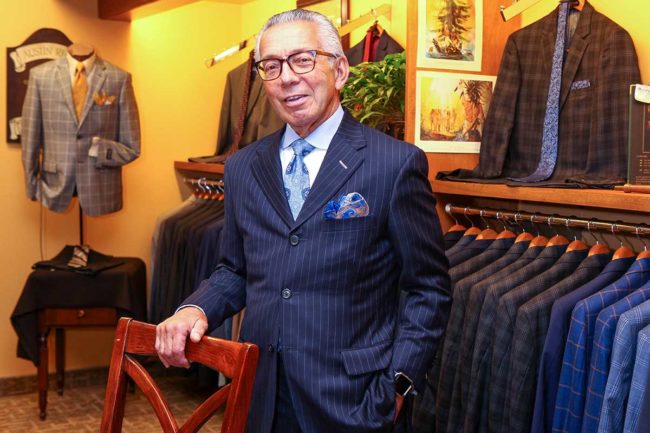 Edward Koolakian: “I tend to think of myself as somebody who creates style and will leave it to the individual to determine what their style is.” (Michael Davis/Syracuse New Times)

Edward Koolakian believes there is a future for his business at 132 E. Genesee St., with people who don’t want to have to deal with electronic sales and malls. But he must wait and see about the potential for a family future in the business. Both his son and daughter have careers in other fields. There is a nephew, however, who is still in college and has not dismissed the possibility.

You spoke of the early days, when there was the Erie Canal and the railroad. Did either of those influence dress and style?

Hanover Square and Clinton Square were the first commercial districts. People needed to come into the area to conduct commerce. They needed to dress.

What’s something that hasn’t changed a bit over the years?

The square itself is still here. The exact shape, pretty close to what it was way back. Many of the buildings are the same. You can see that from old photographs.

Do you set the trends for local fashions or do you follow them?

I’m no slave to fashion as a menswear store. I tend to think of myself as somebody who creates style and will leave it to the individual to determine what their style is.

People want something that will have longevity, and will last in its quality. I don’t consider that fashion. I think fashion is kind of fleeting, here one year, gone the next. My clients tend to be people who want sport coats, suits and dress slacks to last them. 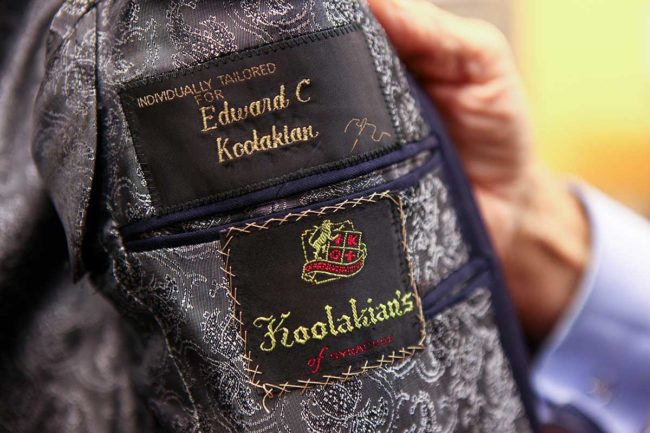 That doesn’t happen overnight. It doesn’t change from one season to the next. If somebody’s a slave to fashion, they could be in the spring of one year and be gone the following spring.

People who want things that change rapidly. If you look at the runways in Milan and you see some of the new fashions coming through, you’re going to scratch your head and say, “What am I missing? That’s fashion? That seems absurd.”

So sometimes fashion can be, in the least sense of the word, something is new and just come in. When I say new, has it transcended anything else? Has it put anything else behind it? Out of style? Then it becomes quick and obsolete.

What determines your style?

I believe my style is predicated on classic clothing that is going to transcend a number of years. Needs to last. Custom garments, I tend to do a lot of suits and sport coats and slacks. Obviously, if you’re spending over $1,000 for a custom suit you don’t want anything that will be in style that year and then I’m going to tell them the following year or two that the suit they bought is out of style.

What will they be spending? 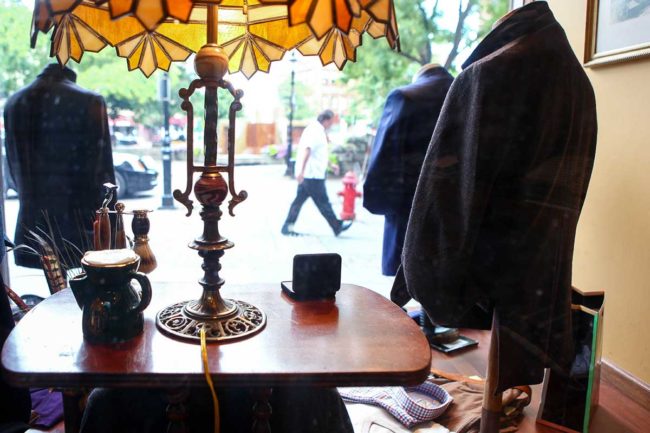 Koolakian’s looks out onto Hanover Square, an area the owner says has a different and more youthful feel than in did 30 years ago. (Michael Davis/Syracuse New Times)

So much of this is determined by culture. Is there a dominant culture downtown?

The culture is changing. Twenty or 30 years ago it was totally a business culture. At 5 or 5:30 p.m., it was bye-bye birdie; downtown became deserted. The culture today is driven more by the people that are coming back into Syracuse to live. Younger people, older people.

The older people probably want to downsize. An example of that is probably the number of new apartments in the State Tower Building. They may be retired, but they want to live downtown. They don’t want to maintain a yard or have to worry about snow removal.

What is the future of downtown?

The future of downtown is the neighborhoods, Hanover Square, Armory Square, the Montgomery Street corridor, Salina Street. There are different components, but I believe the future of downtown is residential, with places for people to be able to dine, recreate, shop. It’s not going to be the 9-to-5 culture we had 25 to 30 years ago when not many people lived downtown.

Bugging Out: A fond farewell to this season’s monarch butterflies
Local Dunkin’ Donuts goes viral for cruelty toward homeless (poll)
To Top