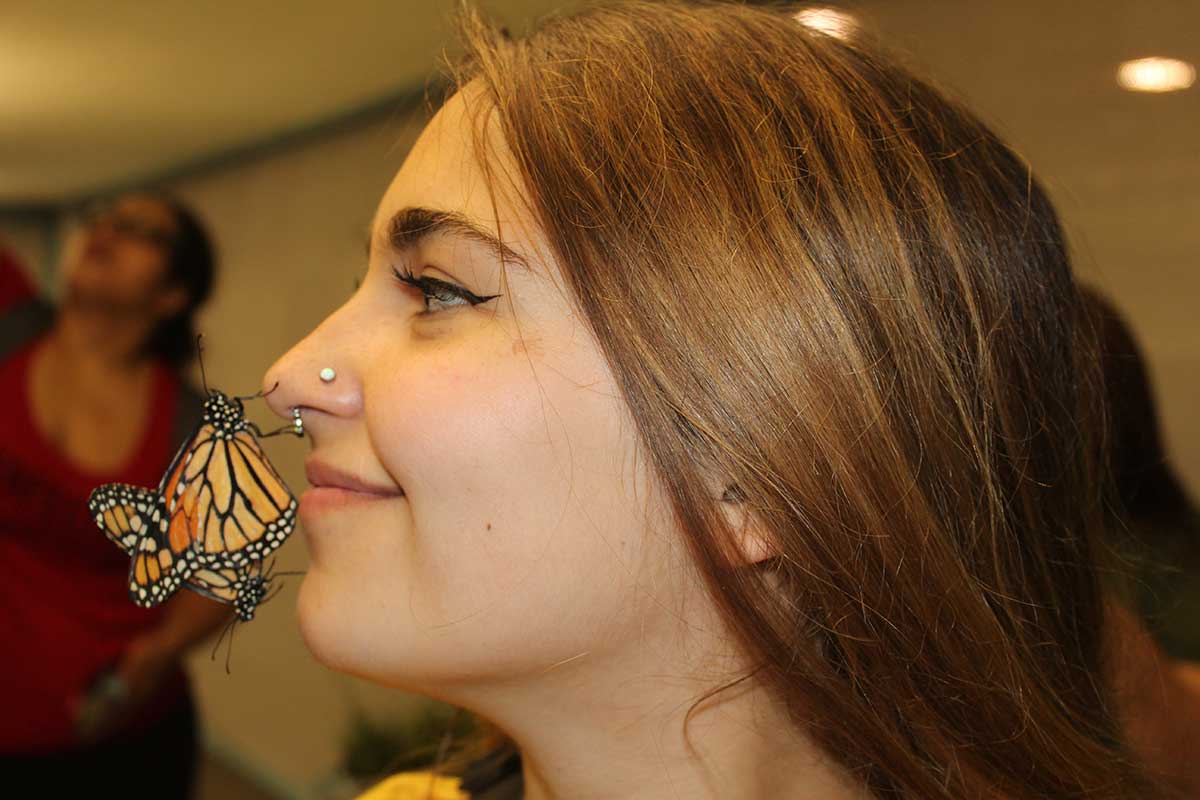 Maybe you have noticed them, flashes of orange and black flitting about the asters in your backyard garden, or around the flowerbeds bordering your neighbor’s home, in the fallow fields, or even amid the landscaping at more unlikely spots like Wegmans in DeWitt. They are the celebrated royalty of the lepidoptera world: the monarch butterflies. And they are on the move.

After all, it is early October, and these fragile, striking insects are on their way back to the homes of their ancestors, far to the Southwest. Arguably America’s favorite bug, these Danaus plexippus (named for the mythological king of Egypt and descendent of Zeus) are not the same butterflies that you may have seen arriving in midsummer but their progeny, the fourth generation of an annual life cycle that began months earlier in the high Sierra Madre mountains of central Mexico.

Some of this is familiar, a classic study in insect propagation and metamorphosis: Monarchs mate, the female lays eggs, then four days later a distinctively striped yellow, black and white caterpillar hatches. Feeding for the next two weeks on the milkweed plant where it originated, the sated caterpillar then spins itself into a chrysalis and, after a serious, 10-day transformation, emerges as an adult monarch.

Then things get complicated. Since monarchs are coldblooded and can’t endure or function at low temperatures, their “winter-over” habitat in Mexico’s Michoacon Hills (and California’s Pacific Grove for those west of the Rockies) provides the requisite climate where millions hibernate until February. Summoning the last of their strength, these butterflies then fly north in search of milkweed, the only food the larvae eat, lay eggs, and, their evolutionary mission completed, die. This reproduce-and-die cycle will repeat itself twice more, through March and April and then through May and June as the monarchs move steadily northward, with expendable lives lasting only two to six weeks.

The fourth, and final generation, however, is blessed. With expanded life spans of six to eight months commencing in late summer and early fall, this is the final strain that inhabits your arrays of late-blooming flowers, sipping nectar through a proboscis that functions as a straw and coils up when not in use, and pollinating your garden. And, when the time comes — around mid-September and beyond hereabouts — heading home.

Watching monarchs fly belies their epic fortitude and their daunting mission. At 2.5 to 2.75 grams they seem weightless, wafted by the ficklest of breezes, and driven by four gossamer, dappled wings that beat in short bursts at 300 to 720 beats per minute, a lower rate than most other butterflies.

And their flight pattern, full of quick turns, swoops and rises, can seem erratic. But by riding thermals, or warm updrafts, and coasting at speeds estimated to be anywhere from 8 to 25 mph, and replenishing their energy along the way, these peripatetic vagabonds manage to cover 2,500 miles back to the winter home of their great-grandparents.

Even more mysterious is the monarch’s guidance system, an unexplained ability to somehow navigate an unfamiliar course of thousands of miles, arriving at a refuge they have never seen.

Like many other species, however, monarch butterflies are feeling the negative pressure of human activity. Their Mexican winter habitat has suffered from illegal logging, and their larval food source, milkweed, has diminished from agricultural land practices, pesticides and herbicides.

“Monarch butterfly populations are declining due to loss of habitat,” according to Chip Taylor, director of Monarch Watch, a research and support facility at the University of Kansas. “To assure a future for monarchs, conservation and restoration of milkweed needs to become a national priority.”

Karen Oberhauser, an entomologist and educator at the University of Wisconsin and director of the UW Arboretum, cites “the risks posed by global climate change and pest control practices to monarch butterflies” as significant factors in the threat to the species. Noting that monarch population numbers are lower than they have been in the past, and that those numbers fluctuate, Oberhauser reiterates Taylor’s point.

“The loss of breeding habitats, areas that have milkweed that the larvae eat and nectar plants that the adults eat also affects the ability of the monarch population to rebound from fluctuations,” she emphasizes. The migration itself is described as a “threatened phenomenon,” due to habitat loss and drought. As a result, some estimates suggest monarch “over wintering” population losses in the tenfold range during the last decade. A 2015 study estimates a 1 billion population drop since 1990. Other factors include predation and car strikes.

Not all the news is bad, however. The Mexican habitat, where hundreds of millions of monarchs have spent the winter, was enlarged by the Mexican government to 62 square miles in 1986 and further added to in 2000. And there is great concern and support in the scientific community. Monarch Watch director Taylor has described the 2018 migration as “promising,” with conditions favorable for monarch population growth “better this year than any year since 2001.”

Oberhauser’s signature curriculum, Monarchs in the Classroom, is designed to educate students and teachers on biodiversity, especially as it relates to monarchs. For the rest of us, the website monarchwatch.org offers updated information on monarch activity, support and conservation (like cultivating milkweed) as well as links to other supportive sites, and monarch-butterfly.com details the monarch’s vital information. The 2002 book by Sue Halpern, Four Wings and a Prayer (Penguin Random House), although lacking in current statistics, offers a hands-on, comprehensive overview of the lives of Danaus plexippus, and the efforts to preserve them.

By now the bulk of the northeastern monarchs have passed through Central New York on their way home to cluster in the oyamel firs of the Sierra Madres and sleep the winter off. And then begin their annual odyssey once again. A close encounter with a monarch fluttering past on a warm October breeze is an enduring tableau of the change of seasons, and a paradigm for the cyclical nature of their fragile existence.