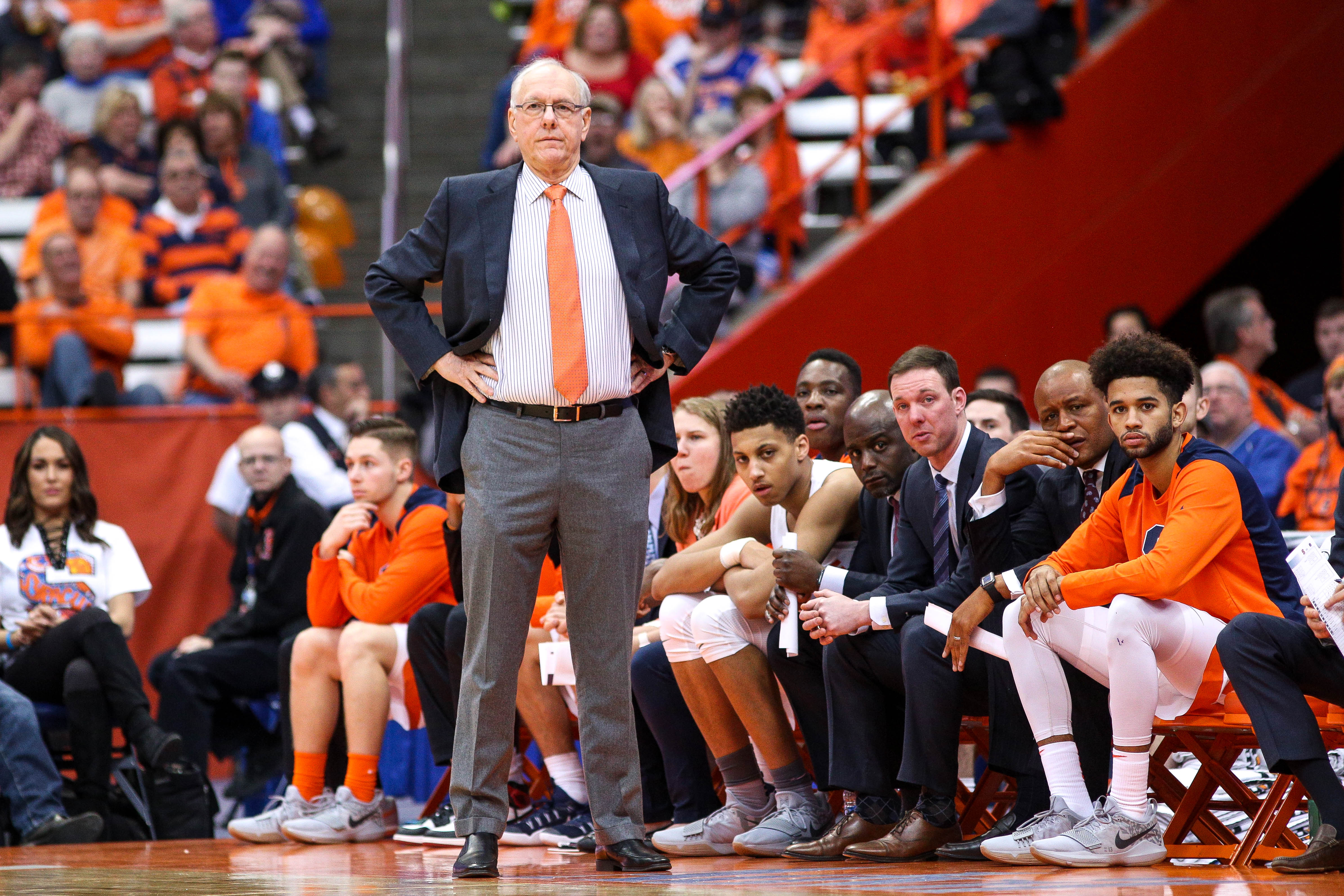 The last one in is one of the last 16 standing. The Syracuse University men’s basketball team, literally the last team selected for the 68-team NCAA Tournament, is now in the tournament’s Sweet 16 for the 19th time in program history. And while there were some improbable runs in SU’s previous 18 Sweet 16 appearances, this one might top them all.

To reach this weekend’s Sweet 16 to face Duke, the 11th-seeded Orange had to defeat No. 3 seed (and No. 5 in the nation) Michigan State University in what amounted to a Spartans’ home game in Detroit; in SU’s third game in five days; with seven scholarship players; with big men Paschal Chukwu and Bourama Sidibe in serious foul trouble; with starting point guard Frank Howard fouling out with 6:39 remaining and the Orange trailing by 5; with walk-on Braedon Bayer filling in for Howard; with MSU outrebounding SU by 21 (51-30); with the Spartans outscoring the Orange 21-5 on second-chance points; and with Syracuse making one field goal in the last four minutes.

In that way, the NCAA Tournament has been no different than the regular season, when the Orange clawed its way to 20 wins despite losing several players from an already-thin roster. With Taurean Thompson transferring to Seton Hall in September, Geno Thorpe leaving the team in early December and Howard Washington suffering a season-ending knee injury in January, Syracuse was left with seven scholarship players plus Bayer, a former walk-on who was awarded a scholarship over the Christmas break because, what the heck, nobody else was using it.

Most “bracketologists” had SU on the wrong side of the NCAA Tournament bubble, and the Selection Committee took a lot of heat by picking the Orange as the 36th and final at-large team. Syracuse surprised most analysts by rallying late to defeat Arizona State in a “First Four” game March 14 in Dayton, Ohio, and then upsetting No. 6 seed Texas Christian University — coached by old Pittsburgh nemesis Jamie Dixon — in the NCAA Tournament’s first round two days later in Detroit.

That’s where it was supposed to end, as the Orange had to face the bigger, deeper and more experienced Spartans, coached by Hall of Famer Tom Izzo. But Boeheim is a Hall of Famer, too, and his 2-3 zone defense has become a great equalizer in NCAA Tournament play.

Consider this: Syracuse held Arizona’s Sun Devils (83 points per game), TCU’s Horned Frogs (82 points per game) and MSU’s Spartans (81 points per game) to 56, 52 and 53 points — a combined 85 points below their averages. Some of Syracuse’s Atlantic Coast Conference opponents may have figured out the zone, but it remains a mystery to the rest of the nation.

“For us, it’s the defense every night,” guard Tyus Battle said. “We know we’re a defensive-minded team and we’re only going to win games as long as our defense is moving. We’re moving, we’re talking, and just making it tough on the opposing team to get up (3-point shots) and stuff like that.”

Unable to penetrate the zone, the Spartans chucked up 37 3-pointers and made just eight, including two “bank” shots that were more lucky than good. In its three tournament games, the Orange is holding its opponents to 34.3 percent shooting overall (57 for 166) and 25.6 percent from beyond the arc (22 for 86).

“I think our activity level and our length up top is tough for people,” said the 6-foot-5 Howard, who’s at the top of the zone with the 6-6 Battle. “If we can be big and clog those passing lanes, we can be successful.”

Syracuse has won all three of its tournament games without scoring 60 points and no other team has won once while scoring less than 60. That puts an enormous amount of pressure on the defense, but the Orange wears it like a badge.

“We don’t care who’s on the floor with us, we’re expecting to win the game,” Battle said. “I have supreme confidence in my teammates, everyone steps up. Braedon came in, hasn’t played much the entire year, stepped up and played some great defense. It’s just the heart of this team: It’s amazing.”

Ah, yes, Braedon Bayer. If there’s one image we’re going to remember from this season, it’s Bayer replacing Howard against Michigan State and giving the Orange defense a block (against Spartans’ star Miles Bridges, no less) and a steal in six gritty minutes. Bayer, from Lagrangeville in Dutchess County, played two years at Division III Grinnell College in Iowa before transferring to Syracuse. He played only 11 minutes in eight games this season before the Michigan State game. 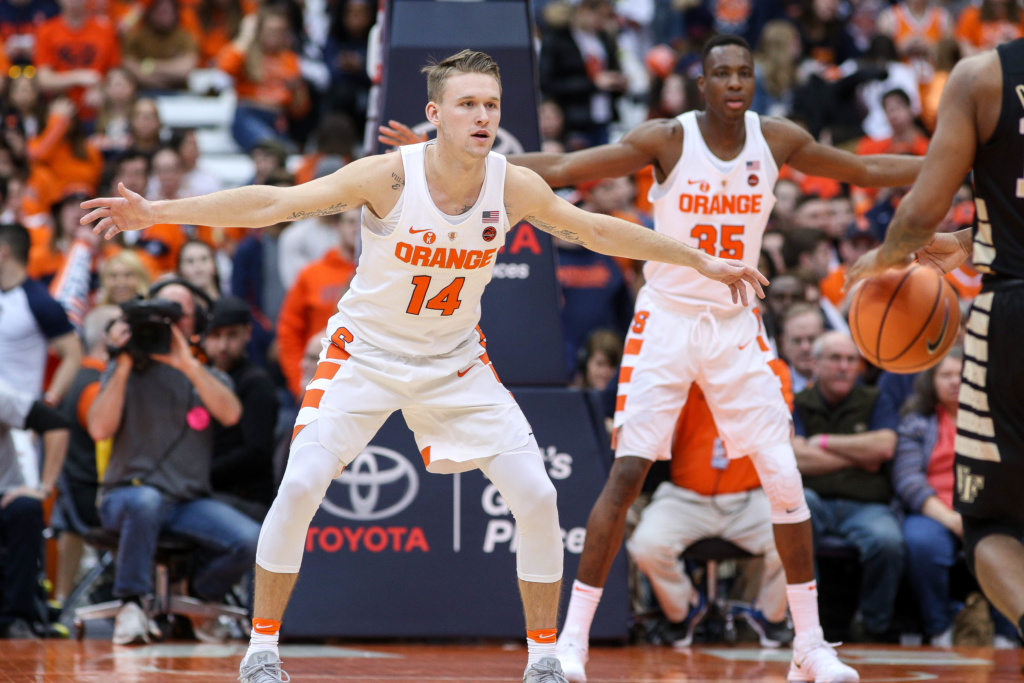 “We’ve got a lot of fighters and a lot of talent,” Howard said, “and with that combination I think we can come up with some wins.”

In the Midwest Region semifinals, the Orange (22-13) will face a familiar foe in No. 2 seed Duke (28-7), which advanced to the Sweet 16 with convincing wins over Iona and Rhode Island. The game is scheduled to start on Friday, March 23, 9:37 p.m., at Omaha’s CenturyLink Center.

Duke and coach Mike Krzyzewski are certainly familiar with the 2-3 zone — Coach K started using it regularly this season — and the Blue Devils did defeat the Orange 60-44 Feb. 24 at Cameron Indoor Stadium. But Syracuse will enter the game with a week’s rest and no pressure as this season has already surpassed everyone’s expectations.

March has been a glorious time to be a Beilein. John Beilein is the men’s basketball coach at Michigan, by upending Houston 64-63 March 17 on freshman Jordan Poole’s 3-point buzzer-beater. Earlier that day, John’s son Patrick landed in Sioux Falls, S.D., where he was about to lead the Le Moyne College men’s team to the first NCAA Division II Tournament Elite Eight appearance in school history.

And one more thing: John, who coached at Le Moyne from 1983 to 1992 and coached Patrick at West Virginia, is going to be a grandpa. Patrick’s wife, Kristen, was due this Tuesday with their first child, a boy.

The Dolphins (27-6) won the East Region March 13 with a 75-59 win over Bloomfield at Le Moyne’s Ted Grant Court. Le Moyne, ranked No. 24 in the country, entered the Elite Eight as the No. 5 seed and played No. 4 West Texas A&M at 1 p.m. Tuesday at the Sanford Pentagon in Sioux Falls. If the Dolphins won that game, they’ll face the winner of No. 1 Ferris State and No. 8 Barry on Thursday, March 22 (visit lemoynedolphins.com for updates and game times).

Before defeating Bloomfield, the Dolphins had lost in their two previous regional championship games in 1959 and 1964. Beilein, in his third year at Le Moyne, said the moment he most enjoyed was the post-game celebration in the locker room.

“They’ve worked hard from the beginning of fall workouts to this point. They’re a pleasure to coach, they’re easy to coach because they all want to win,” Beilein said. “These guys deserve all the credit and I will always remember this group for winning this region.”

Fifth-year senior guard Tyquan Rolon, a Syracuse native and Nottingham High School product, led the Dolphins with 8 second-half points against Bloomfield and hit a key 3-pointer with about 5 minutes remaining after the Bears had sliced Le Moyne’s lead to 1, 54-53. Rolon’s trey keyed a 21-6 Dolphins’ surge to end the game.

“To do this in front of my friends and family, that means a lot,” Rolon said. “Some guys on the team, their families have to fly just to get here. I’ve got people who come five minutes away to see me play, so it’s a great feeling to win a championship in front of them.”

As it turned out, the Syracuse women’s basketball team’s loss to Virginia Tech in the second round of the ACC Tournament March 1 was more of an indicator than an outlier.

The Orange lost that game 85-70 after getting outscored 29-5 in the fourth quarter. In the first round of the NCAA Tournament March 17, the No. 9 seed Oklahoma State Cowgirls went on a 38-9 run at the end of the first half and cruised to an 85-57 rout of the No. 8 Orange in Starkville, Miss.

The Orange finished 22-9 with its sixth consecutive NCAA Tournament appearance and seventh overall in Hillsman’s 12 seasons. Next season, Syracuse is expected to return its top seven players, including Tiana Mangakahia, who set the SU and ACC single-season record with 304 assists. The Orange has also received a commitment from five-star recruit Emily Engstler from New York City.

Queens For A Night At Syracuse’s Salt City Drag Battle
CNY Heartbeat Poll: Should college athletes get paid to play?
To Top