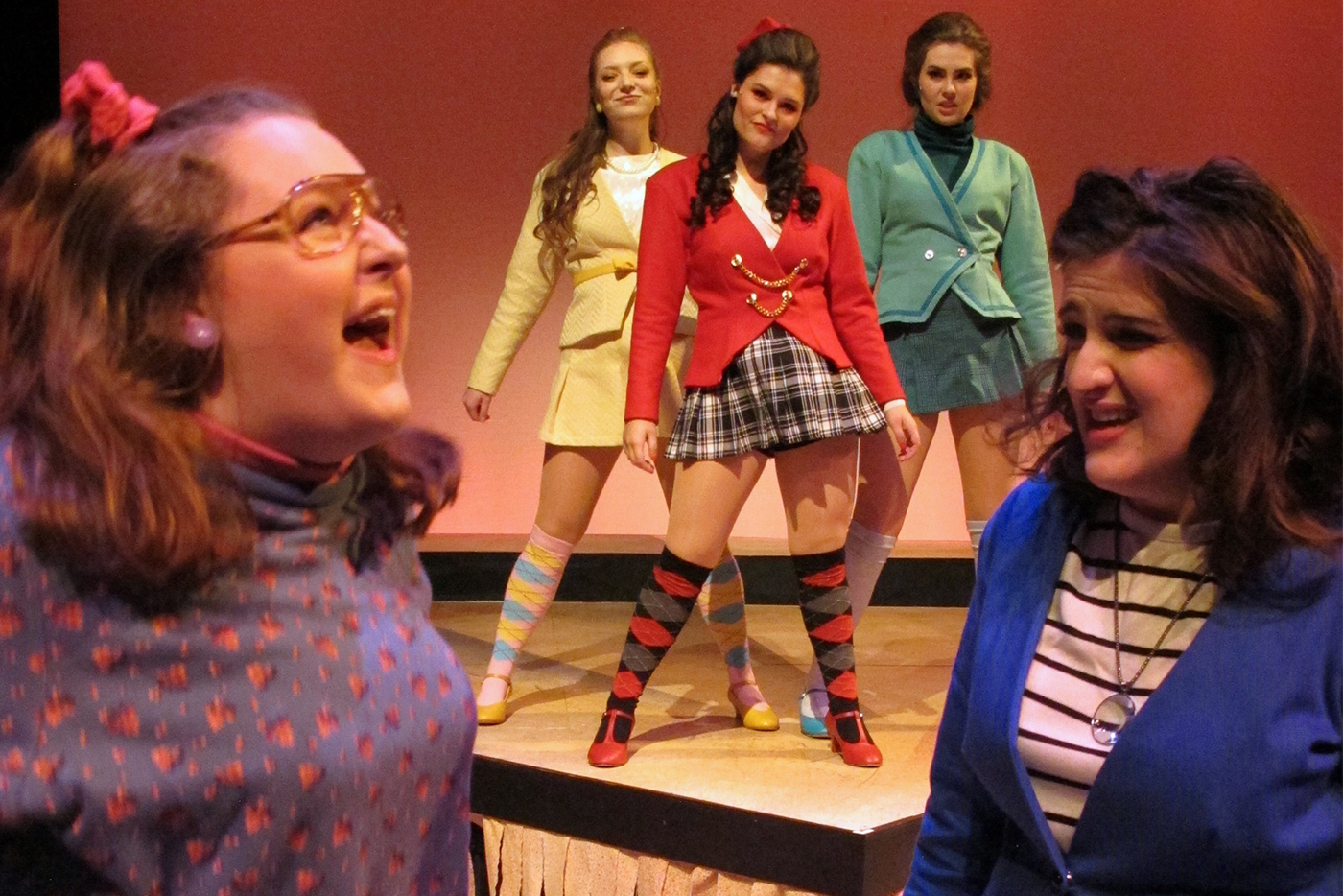 The 1989 black comedy Heathers made a movie star of the teenage Winona Ryder while trashing the sunny view of 1980s-era adolescence as seen in director John Hughes’ works such as Pretty in Pink. Think of it as Bitchy in Scarlet. Jokes about murder and suicide led to its box-office disappointment, but the often outrageous script helped attract a loyal cult.

The team of Laurence O’Keefe and Kevin Murphy launched Heathers: The Musical in Los Angeles in 2010, which made it to off-Broadway in spring and summer 2014. The pair had previously collaborated on Reefer Madness: The Musical and Batboy: The Musical. That’s “batboy” as in tabloid horror, not dugout kid.

While Heathers might have made a winner for one of the edgier community groups, it is instead at the unlikely venue of Le Moyne College’s Coyne Center for the Performing Arts, where the Boot and Buskin Theatre Club is staging only its third musical (running through Saturday, Feb. 25). The company is usually known for such critical pleasers as Shakespeare’s little-seen Pericles, Prince of Tyre.

To stride confidently in this new direction, Le Moyne department head Matt Chiorini has imported Amy Fritsche, a director-choreographer with sterling national and international credits, currently on the faculty of Kent State in Ohio. Le Moyne’s standards are high, but even with ace set designer Karel Blakeley cited in the credits, no other production has ever looked or sounded like this one.

Ohio’s Westerburg High School might be ethnically homogeneous, but the halls and cafeteria look like war zones where the Ins prey upon the Outs, and brutish jocks bully gasping nerds. Ruling over the fray is a trio of chic, unsmiling beauties all named Heather. In Daniel Waters’ original script, Heather was a name favored by families of privilege, whose daughters could flaunt their cool and their conspicuous consumption. Dominating the threesome is Heather Chandler (Noelle Killius) in a crimson military blazer and a short skirt of primary colors. With her in pastels are followers Heather McNamara (Meara Mosny) and Heather Duke (Jade Miori). All three expose lengthy expanses of well-toned thigh.

Telling us about all that we see is tall Veronica Sawyer (Morgan Smith), who raises a monocle to her eye when she recites from her diary. Initially linked to the wrong people like her best friend, plumpish Martha “Dumptruck” Dunstock (Maggie Wilkerson), Veronica helps to get the Heathers out of detention and so is invited to join the exclusive clique. Morgan Smith, whose default persona is comic, a bit like Joan Cusack, never looks comfortable in the embrace of the trio.

Celebrating their supremacy, the three Heathers thunder across the stage in its best production number, the blistering hot “Candy Store.” While we expect such arrogance must ultimately be headed for a fall, actresses Killius, Mosny and Miori have star power to flaunt.

Westerburg being co-ed, boys increase the tension. The two most prominent jocks are Kurt Kelly (Michael O’Sullivan) and Ram Sweeney (Kilian Crowley), who we first saw overturning trays in the cafeteria. Heather Chandler learns that hapless Martha has been smitten with Ram since kindergarten, and forges a love note from him as a cruel hoax to lead the girl to further humiliation. Jocks can be used rather than seen as trophies.

Veronica, meanwhile, meets a new boy at school: the slightly built Jason “J.D.” Dean (Alex Leblond), who wears a long, black leather jacket, reads what appears to be French poetry, and is anything but a jock. Kurt and Ram issue a gratuitous slur to J.D., which leads to slow-motion fisticuffs, in which both jocks are pummeled. Choreographed fighting may not be the equivalent of dance, but this is director Fritsche’s single most dazzling moment.

There will be no plot spoilers here, but there are about 10 unexpected reversals, which lead to some of the best musical numbers. The jocks’ two fathers (Theodore Grader II and Tino Laterza) sing in praise of what they perceive as their sons’ hidden tenderness. In one of the show’s most affecting numbers, Meara Mosny’s Heather McNamara reveals her humanity in “Lifeboat.”

Heathers: The Musical was not a huge off-Broadway hit, but it should have an extended life with local companies. If the late Chris Lightcap of the Talent Company were still with us, she would have fought to get the rights.