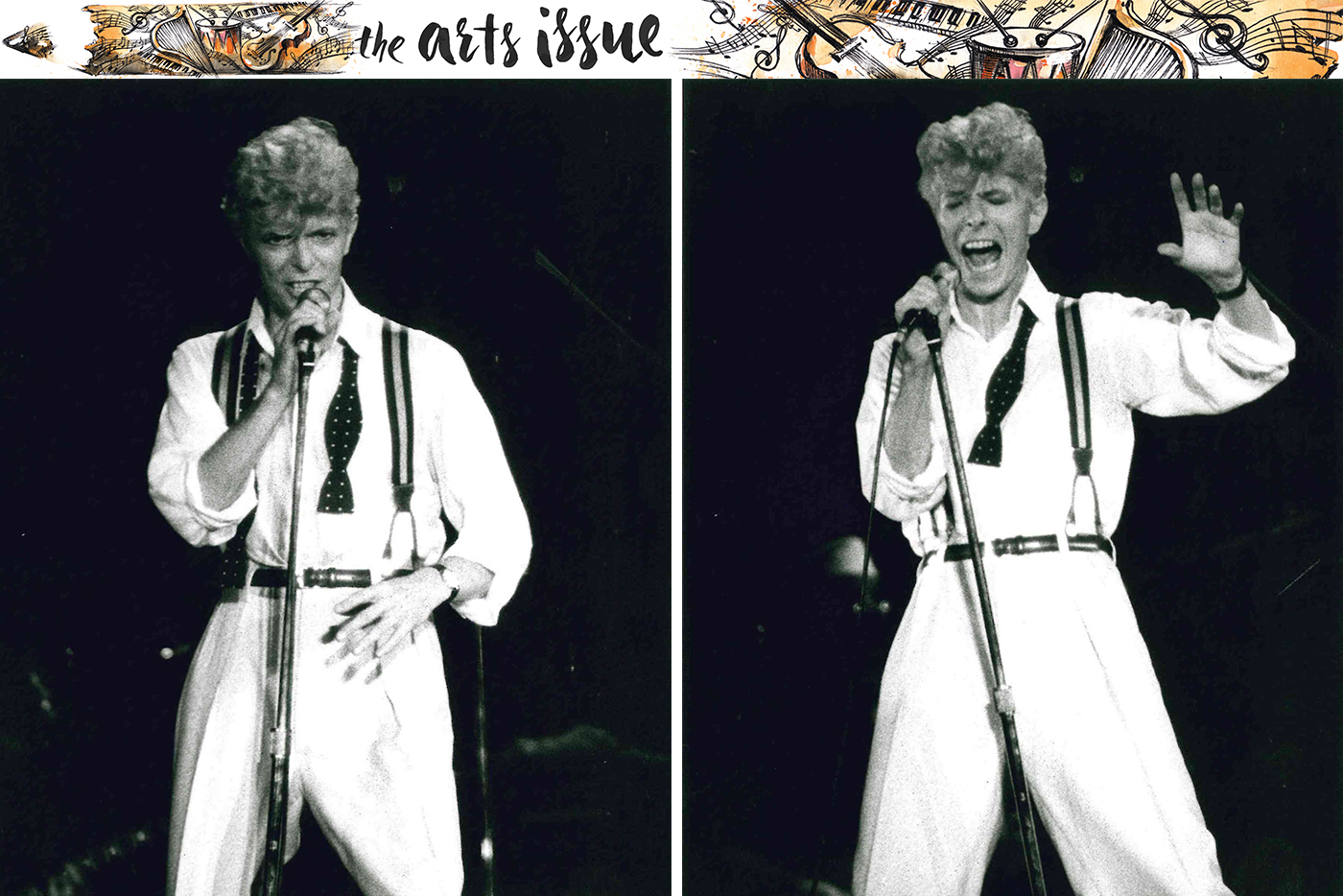 The autumn slate of local exhibits is all over the map. There are shows that focus on disparate figures such as rock star David Bowie and cartoonist Edward Koren, exhibits that concentrate on a single medium such as quilts or prints or cups, and a recounting of a trip taken on New York state waters. And the range of shows expands with solo exhibitions for L.J. Bigness and Jim Ridlon and a display of early works by Ansel Adams.

A selection of new works by Angela Fraleigh opens Sept. 24 at the Everson Museum of Art (401 Harrison St.; 474-6064). Her new paintings are inspired by pieces in the museum’s collection, by women prominent in the Arts and Crafts movement and various social movements. Expect, for example, a painting depicting Lucretia Mott, an abolitionist and women’s rights pioneer. Tide and Current Taxi, also opening Sept. 24, uses multiple media to document Marie Lorenz’s travels along the Erie Canal and Hudson River this summer.

Unique, also at the Everson, celebrates the artistic talents of Central New Yorkers living with disabilities. This juried show, featuring artworks and literature, is coordinated by Arise, a local non-profit group. It closes Sept. 25.

The Urban Video Project, affiliated with Light Work Gallery, Syracuse University and the Everson, has planned a Friday, Sept. 2, event at the museum that begins with an arts fair from 7 to 8 p.m., then swings into an outdoor showing of Star Wars: The Force Awakens on the museum’s north façade. Starting Sept. 15, Fireworks by Thai filmmaker Apichatpong Weerasethakul will appear on the outside museum wall three nights a week.

The gallery at the Syracuse Tech Garden (235 Harrison St.) is preparing We Can Be Heroes: Visualizing the Music and Life of David Bowie, a show with a broad agenda. It’s open to portraits of Bowie, to artworks interpreting a song or his legacy. There will be an opening reception on Sept. 22, 5 to 7:30 p.m. The exhibit runs through Dec. 2.

Another downtown venue, Tyler Art Gallery at SUNY Oswego’s Metro Center (2 Clinton Square; 399-4100), hosts Urban Beat, featuring works in encaustic and oil by L.J. Bigness. She has displayed her work locally and at galleries in Rochester and other cities. Bigness will be recognized at a reception on Thursday, Sept. 1, 5:30 p.m. Urban Beat wraps Oct. 22.

ArtRage Gallery (505 Hawley Ave.; 218-5711) will present Finding Your Power from Sept. 10 to Nov. 12. The show features paintings by Robert Shetterley, whose portraits depict activists concerned with peace and war, or social justice. They include Fannie Lou Hamer, a civil rights advocate in 1960s Mississippi; Oren Lyons, Onondaga faithkeeper; and Ray McGovern, a longtime CIA analyst turned anti-war demonstrator. The gallery has scheduled several events connected to the exhibit: a Sept. 10 reception at 7 p.m.; a talk with McGovern on Sept. 11, 2 p.m.; and Shetterley discusses his work on Sept. 14, 7 p.m.

Associated Artists has scheduled a Sept. 10 opening for its annual juried exhibition at the Manlius Public Library (1 Arkie Albanese Ave.; 682-6400), with a Sept. 18 reception from 2 to 4 p.m.

The Almighty Cup, a juried show whose participants come from around the country, begins a six-week run on Oct. 1 at the Gandee Gallery (7846 Main St., Fabius; 416-6339). The exhibit focuses on cups as objects of art.

The Schweinfurth Art Center (205 Genesee St., Auburn; 255-1553) has a busy fall schedule. Emerging Artists of Central New York displays works by Rebecca Alosio, Madeline Bartley, Awenheeyoh Powless and Eeva Siivonen. The quartet will be feted at a Sept. 2 reception which begins at 5 p.m. Then on Oct. 29 the gallery opens its signature show Quilts = Arts = Quilts, an international juried exhibition.

On the Syracuse University campus, Light Work Gallery (316 Waverly Ave.; 443-1300) has just opened two exhibitions. A Place Called Home hangs pieces by Todd Gray, who lives and works in Los Angeles and Ghana. He combines and layers images from a diverse portfolio: photos of gang members in LA, documentary photos taken in Ghana, portraits of Michael Jackson, and more.

Also on display is a group exhibition of photos by Central New York artists Marion Wilson, Robert Knight and Lida Suchy, who are winners of the 2016 Light Work grant awards. A reception takes place on Oct. 7, 5 to 7 p.m. Both shows run through Oct. 22.

SU Art Galleries (Shaffer Art Gallery; 443-4097) hosts About Prints: The Legacy of Stanley William Hayter and Atelier 17, which explores the transformation of graphic arts during the 20th century. It displays prints not just by Hayter but also by well-known artists such as Joan Miro and Henry Moore. An opening reception is scheduled for Sept. 8 at 5 p.m.; the show wraps Nov. 20.

Upcoming shows include the retrospective Maurice Sendak: 50 Years, 50 Works, 50 Reasons (Sept. 20 to Oct. 23) and Edward Koren: The Capricious Line (Oct. 28 to Dec. 23), which displays Koren’s drawings in a large-scale format. He contributed cartoons to The New Yorker magazine for many years.

At Le Moyne College’s Wilson Art Gallery (Noreen Reale Falcone Library; 445-4153) Composure showcases Dan Roche’s images documenting moments of pause or concentration or meditation. There will be a reception on Sept. 9, 4 to 6 p.m. That exhibit closes Sept. 30, giving way to the Oct. 7 opening of Ben Schwab’s In Praise of Shadows.

On the SUNY Oswego main campus, the Tyler Art Gallery (Penfield Library; 312-2012) kicks off its autumn schedule Sept. 6 with artworks by members of the Oswego art faculty. There will be an opening reception on Sept. 16, 5 to 7 p.m. Restart, a group show focusing on new beginnings and fresh starts, runs Oct. 21 to 30.

Cornell University’s Herbert Johnson Museum of Art (607) 255-6464) has two shows referencing the United States and Japan: JapanAmerica: Points of Contact 1876-1970 and Japonisme: The First Wave and Beyond. Both shows end Dec. 18.

Colgate University’s Picker Art Gallery (228-7634) will open Marko Maetamm’s I Want to Tell Something on Sept. 15. His acrylics explore domestic life from a sardonic perspective.

For art aficionados interested in road-tripping, Utica’s Munson-Williams-Proctor Arts Institute (310 Genesee St.; 797-0000) is displaying The World Through His Lens, 40 of Steve McCurry’s photographs in large-scale formats, and Portraits of Hope: Faces of Refugee Resettlement in Central New York, through Dec. 31.