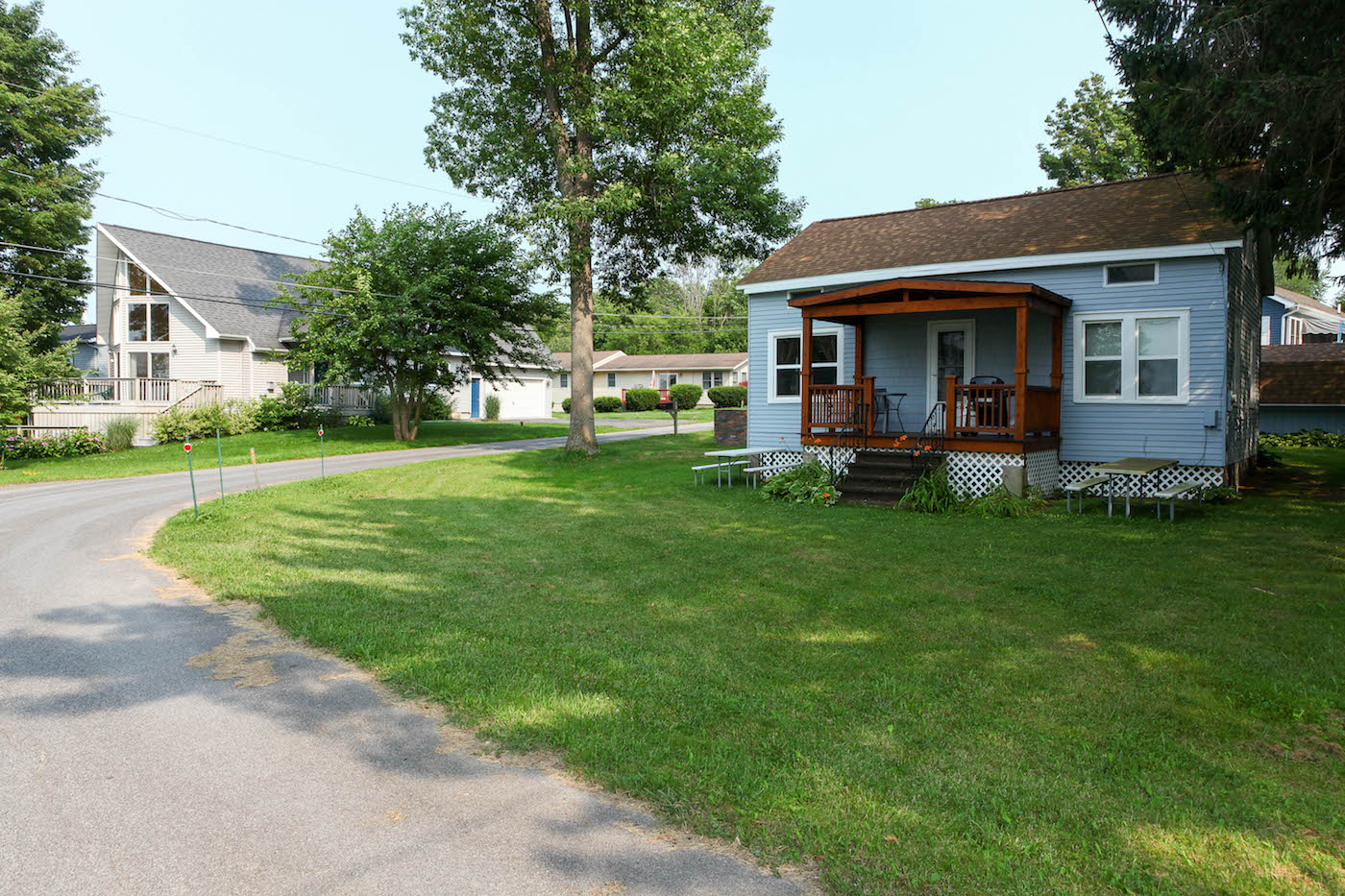 A 2,000-square-foot plot of land on Lake Oneida Beach with the purchase of a six-month newspaper subscription? Sign us up.

Recently I was driving on Route 31 in Lakeport when I saw a street sign that read Syracuse Herald Avenue. I was immediately intrigued. What I stumbled upon was what the Syracuse Herald considered “the greatest offer ever made by any newspaper.” 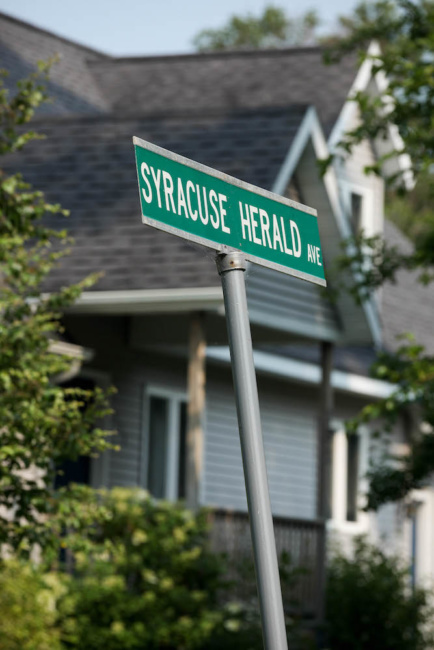 It was 1923 when the Syracuse Herald embarked on a campaign to increase subscriptions to its paper by offering a plot of land in a new development, Lake Oneida Beach, with a six-month subscription. The company had purchased a tract of land 18 miles from the city of Syracuse on Lake Oneida. It laid out streets, built a clubhouse, pier, parks and summer homes.

With your six-month subscription, you had the opportunity to purchase a 2,000-square-foot plot for just $58.50, $8.50 down and $2.50 a month. The Syracuse Herald advertised it as home to the best fishing in the country, an attractive summer resort that offered the “best obtainable health conditions.”

Interested individuals could visit the Syracuse Herald office on South Warren Street, or venture to the lake via rail cars and motor buses organized by the paper at no charge. Once at the lake, potential buyers could tour the grounds and secure a location with representatives who stayed from sunup to sundown to take orders. Buyers had to purchase two lots in order to build and couldn’t buy more than five.

With your purchase, the Syracuse Herald paid your taxes for one year and you received a life membership in the Lake Oneida Beach Colony. The membership enabled any member to use the beachfront property the paper had secured and gifted to the colony.

The beachfront property was accessible to all members and could not be built upon or purchased. The paper’s management said this was not a “transitory project” but instead, the building of a permanent summer colony fostered and furthered by the Syracuse Herald.

Reports show that more than 2,700 lots were sold in just one month, as the paper encouraged individuals to drive out and see the development for themselves. Many residents put up tents on their new land while others built bungalows and cottages.

Due to the demand and the success of their campaign, the paper purchased more land just east on the shore of the lake and opened a new tract with available lots. The tract, titled Lake Oneida Beach East, offered similar amenities including a bathing house, pavilion, boardwalk and tennis courts. When the colony formally opened for “Herald Colonists” that summer, the paper hosted an event that included airplane rides from the city of Syracuse to Lake Oneida.

Today the colony feel continues at Lake Oneida Beach with some minor adjustments. Roads have been paved and you now need to own six lots in order to build new.

Current residents, many tracing back to the original subscribers, have maintained the beachfront property, spanning 13 blocks, for all members to use for a small newly implemented fee.

Just down the road at Lake Oneida Beach East you can see more remnants of its historic past when you approach the colony and see Arthur Jenkins Road, named for the publisher of the Syracuse Herald at the time of the campaign.

View images from the marketing campaign used to entice subscribers below. Click to view larger images. 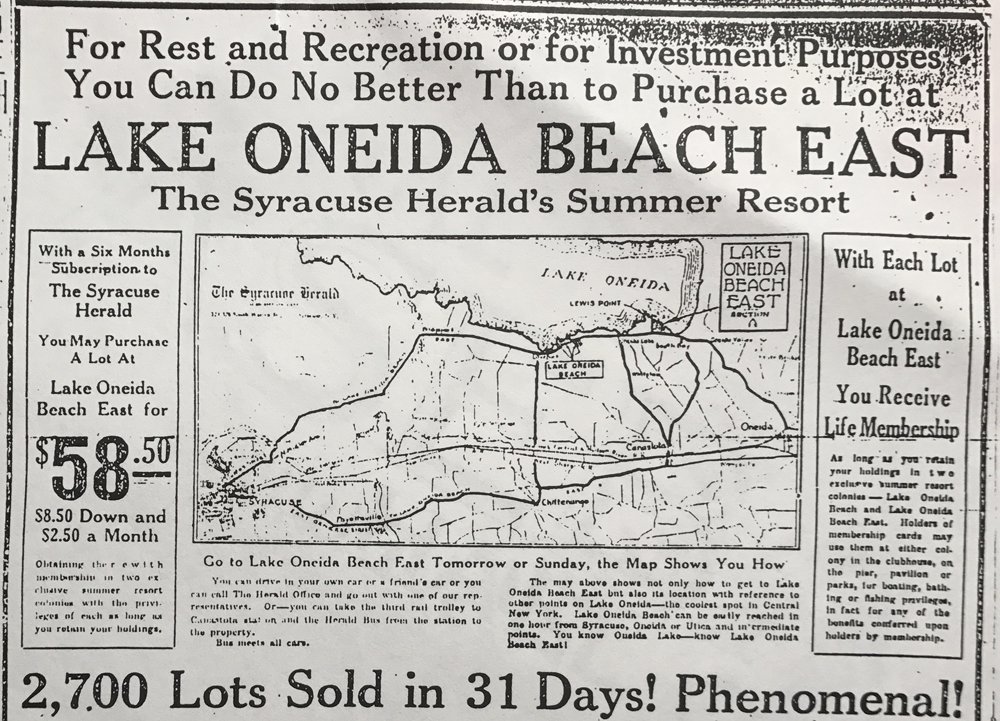 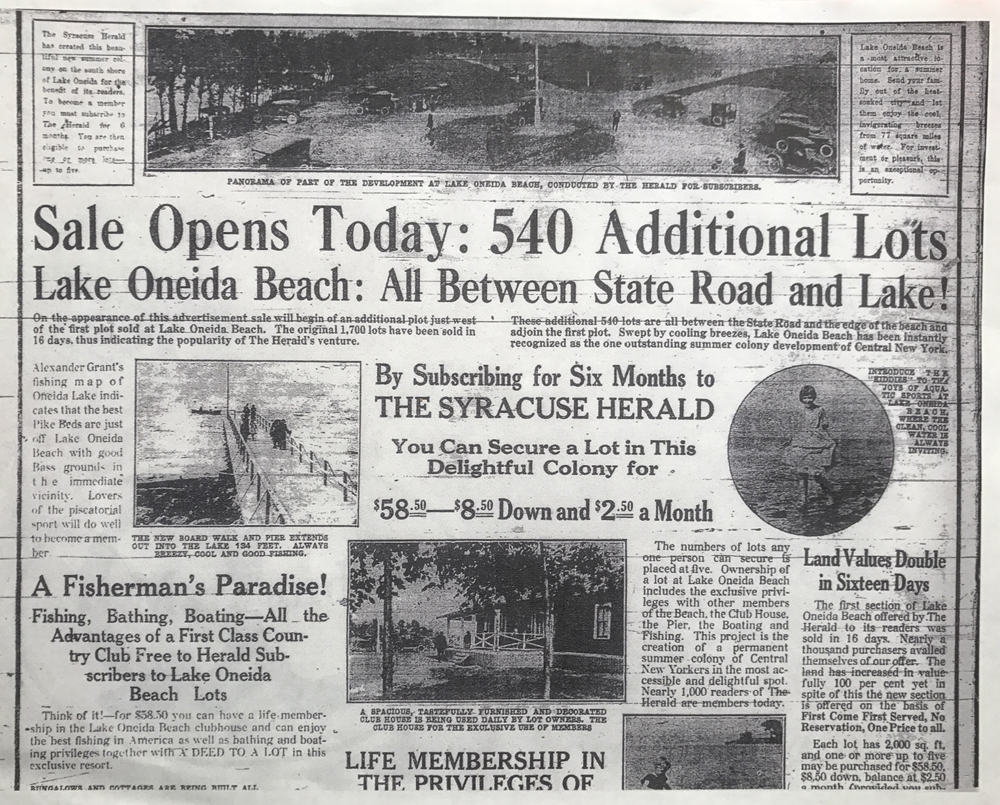 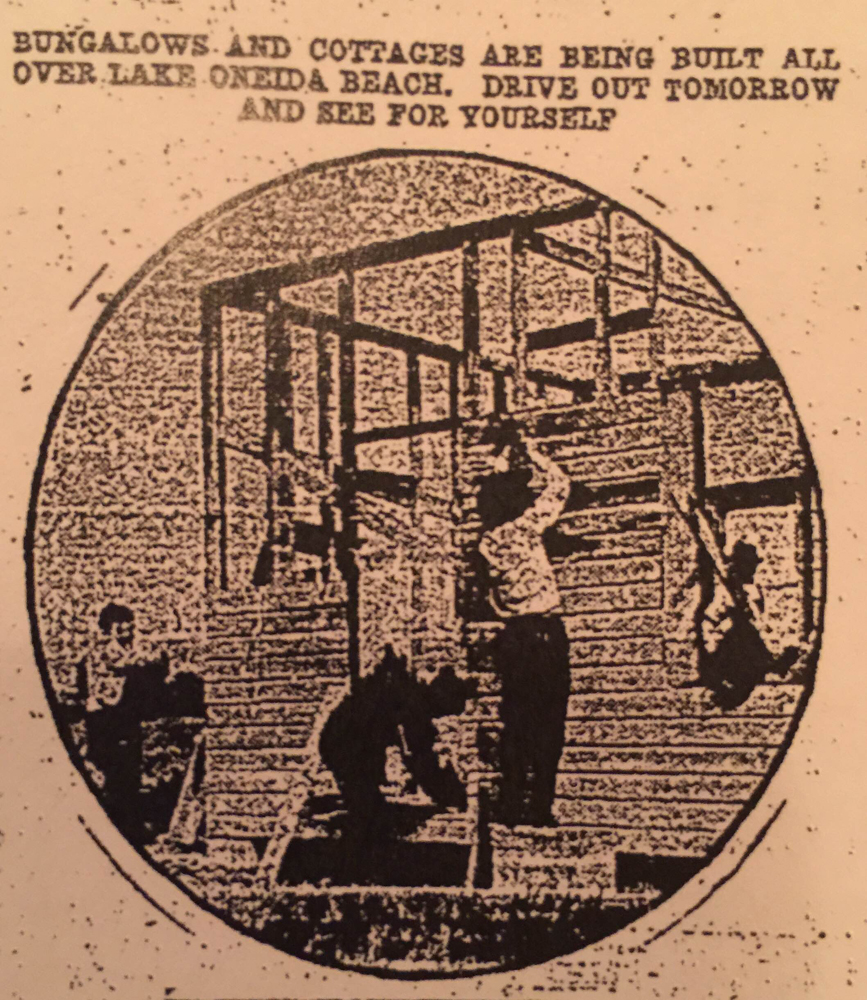 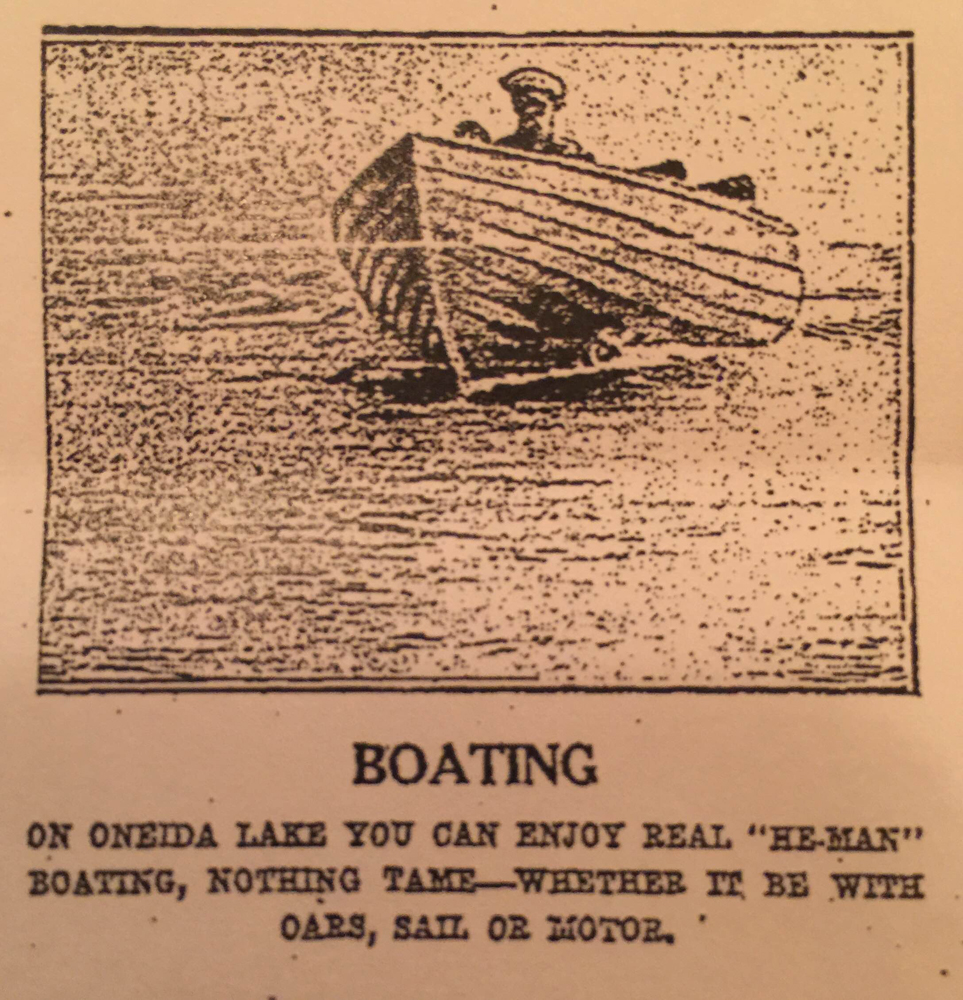 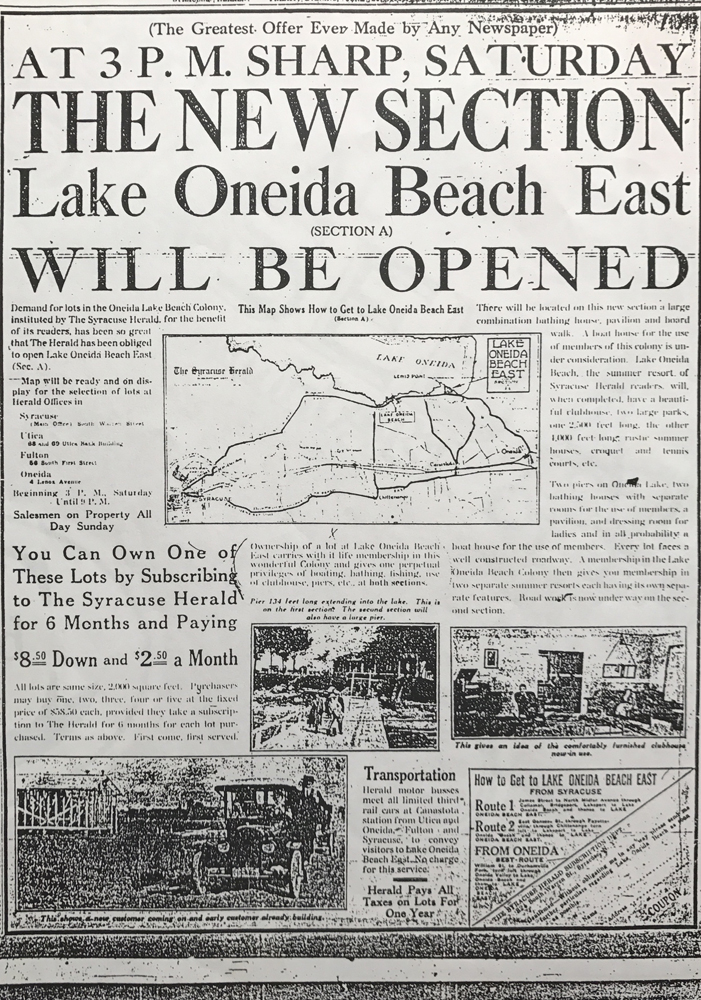 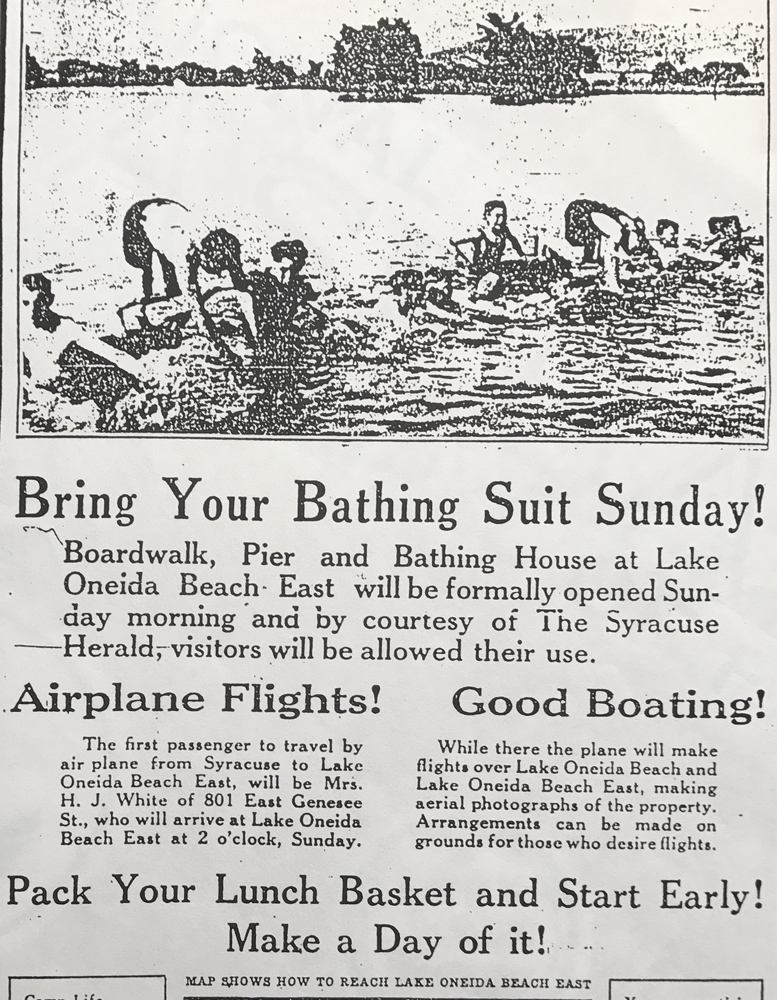