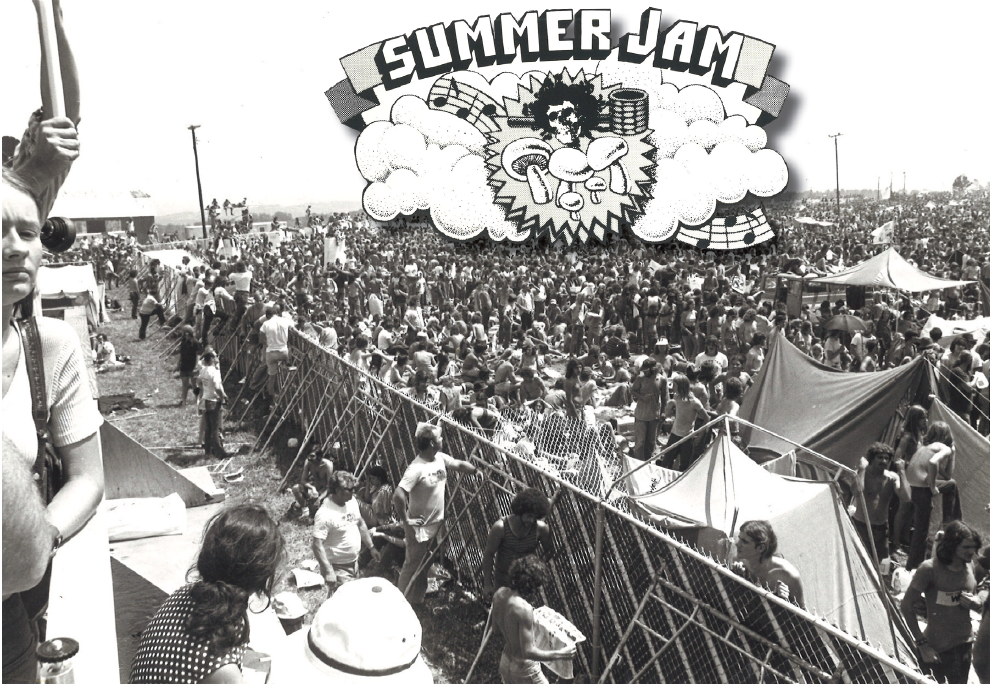 The Grateful Dead played a four-hour set during the Watkins Glen Summer Jam on July 28, 1973. The blowout lured more than 600,000 to see the Dead, the Allman Brothers Band and The Band. Photo by Bob Lorenz)
Share
Tweet
Share
Share
Email
Comments

Perhaps more than any other band in history, the Grateful Dead wasn’t just about the group members. It was about a culture that extended like a family, spanning to include the people around the band just as much as the musicmakers themselves. The road crew wielded significant influence and were regarded as some of the band’s closest friends and confidants. Roadie Steve Parish became exceptionally close with Jerry Garcia, remaining with him up until the final moments of his life. On Friday, March 22, Parish will visit Fayetteville’s Papa Gallo restaurant, bringing his many tales about the Dead. It will be the first of three area appearances, with other stops in Ithaca and Rochester. He’ll be joined by musician Katie Skene, who will play music to accompany the stories, and by members of the local Grateful Dead tribute band Dark Hollow.

Parish, who also has The Big Steve Hour radio show on SiriusXM’s Grateful Dead channel, has been spinning his yarns for years. His book Home Before Daylight: My Life on the Road with the Grateful Dead, published in 2003, also relates his many adventures watching some of rock music’s most beloved songs come to life.

Before coming to town, Parish took a few minutes to speak with the Syracuse New Times about how he came to join the Dead, why their music is still so important today and how it feels to continue spreading the love of a band that started more than 50 years ago.

Tell me about how you got involved with the Grateful Dead.

Getting involved with the Dead was like a destiny thing. As a child, I would wake up and have incredible semi-dreams. The bed turned into a vehicle taking me all over the world. I grew up in New York City and was a rough kid on the street, a juvenile delinquent, basically. I got in trouble in a lot of ways and moved to San Francisco when I was 18. It was by mere chance standing on Brady Alley in San Francisco, when a guy across the street was unloading a truck. It was a bass cabinet. I didn’t even know what it was at the time. But his name was Ramrod. Because I helped him that day, it turned into an entire world.

Tell me about meeting Jerry Garcia.

We worked at (music instrument manufacturer) Alembic and Jerry would be there every day hanging out with us and other people. He was at the studio learning about rock’n’roll, which was just becoming its own thing. At that time, Jerry wanted to play every night. He didn’t want to ever stop. The Dead wasn’t enough for him. I had a Fender strat and twin reverb in my car and we would go to the clubs together in my car. He started the Jerry Band that way, just playing gigs constantly. I feel I’m one of the luckiest people in the world to have been with him all the time. When he rehearsed with the Dead or the Jerry Band, I was there. When he went and played on other people’s albums, I went with him.

What were some of the challenges you faced?

There was a lot of adversity on the road in those days. We were long-haired, smoked pot and the police were always on our back. It was a very different life. It was rough in the way that rock’n’roll has become more refined and respected now. But we went from nightclubs to theaters to civic centers to stadiums and we built it all ourselves.

It must have been amazing to be right there when some of rock’s most iconic songs were written. What were some that you were there for?

I was there for every song. I know how “Cassidy” was written. I’ll tell it at the show. “Friend of the Devil,” I saw that and got to witness it. The songs were birthed in front of us. We lived together, traveled together, got rich together, poor together. (Lyricist Robert) Hunter would talk to us about the songs and so many of them were about our lives. “Truckin’” was about our lives as we lived in a tough world. We were strong men doing something difficult. I’m lucky to be blessed with the memory I still have to talk about it all. We did a lot of drugs, but we always did our jobs and that’s why I’m here to talk about it.

Tell me about your friendship with Jerry.

I still cherish that many years later. I’m still so close to his family. The bond of friendship and how you keep going through life. . . we all had losses and tragedies. But there’s no other band that gave their crew a pension fund. We were closer than any other band and crew. They treated us so well. We put our lives on the line for each other. We’d get in trouble, but the band was right there to get us out. That’s what I cherish.

What’s it like to see the Dead is still being such an incredibly relevant band today?

It’s amazing to see the Dead still living on. For a while, it was hard to listen after Jerry passed. We thought it was gone. And the guys said they’d never become copies of themselves. But I support Dead and Company. I support Phil and Friends. And everywhere I go, there are Dead cover bands. They worship the Dead. I can’t go to a town without one. People give back so much love and respect. I love that. It’s become a genre itself and it’s something I’m truly proud of.

What do you think Jerry would think of all of it?

He wondered if we could make it. But it was an amazing thing that we built. You can never in your wildest dreams see what will happen, but other times you can feel it in your soul. I think he knew it would go on. People rose to the occasion and kept the band going, laughing, traveling. You know, when Pigpen died we thought that was the end — and that was 1973! You keep going.