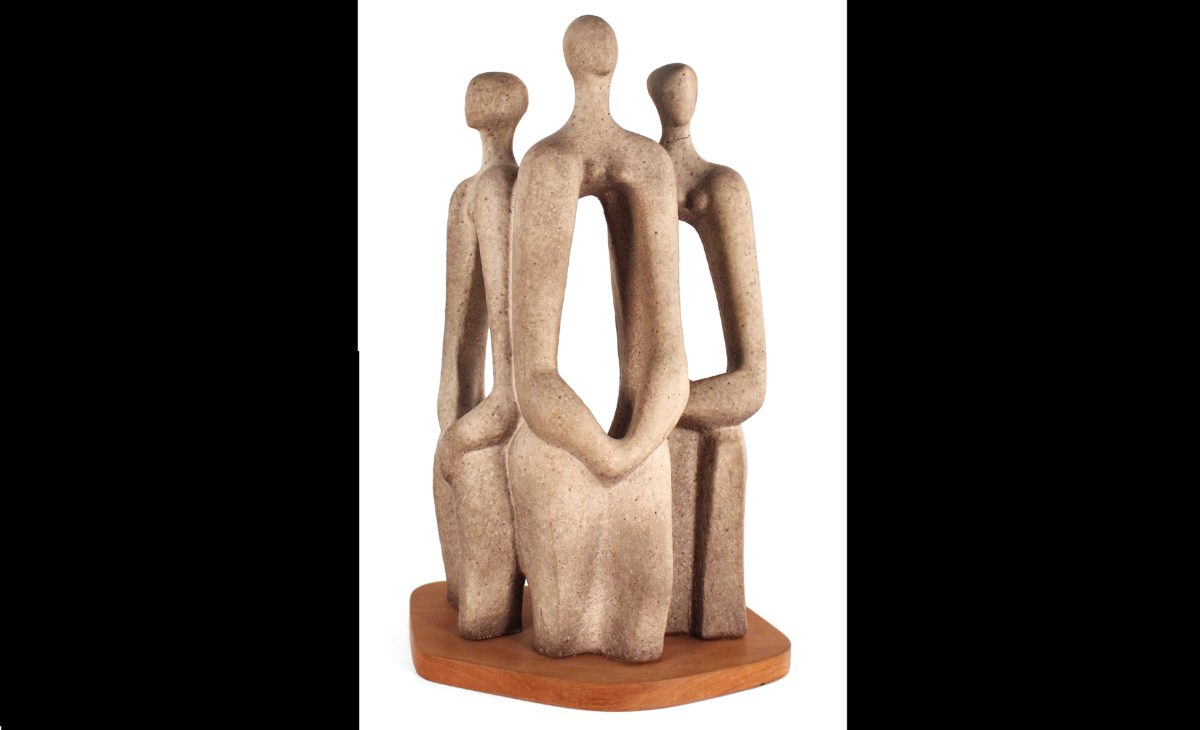 The Everson Museum of Art’s new exhibit both surveys ceramists doing figurative work and pursues a larger agenda. Along the way, Key Figures: Representative Ceramics 1932–1972 displays whimsical works and sparse pieces, stylized sculptures and artworks referencing the Bible or mythology. The show doesn’t wrap up in 1972, however; it also encompasses works by several contemporary artists.

“Osiris with Cat” demonstrates how artist David Gilhooly consistently worked with a sense of humor. He once created a piece in which a small frog figure is wedged into the middle of an Oreo cookie.

The exhibition also documents the influence of artistic movements in Europe on ceramics in the United States. It includes “The Dancers” by Susi Singer and “Taming the Unicorn” by Vally Wieselthier. Both of them grew up in Vienna, Austria, began their artistic careers there and emigrated to the United States because of the rise of fascism in 1930s Europe.

Key Figures also presents stylized pieces by Thelma Frazier Winter and Viktor Schreckengost. Her work, “Juggler,” combines lush color and a figure with legs bent underneath him. His piece, “Head of Keramos,” decorates a head with lettering, tiny objects, a wine jug and what appears to be grapes. There are blank spaces instead of eyes.

In addition, the exhibit displays a variety of interpretative works. Waylande Desantis Gregory’s “Europa and the Bull,” plays off a Greek legend, and his porcelain, “Salome,” portrays the stepdaughter of King Herod, drawing on a biblical narrative. Then there’s William Mozart McVey’s depiction of St. Francis of Assisi, the patron saint of animals, on his knees paying homage to a bird. Schreckengost’s “The Dictator” portrays the emperor Nero playing a violin, presumably as Rome burns.

The show consistently explores the notion of ceramics as a genre with multiple directions. Thus, viewers will see “Untamed” and “Prairie Combat” by Bernard Frazier. The latter piece is hardedged and physical, as two creatures fight to the death.

“Winter Weasel” by Ruth Hunie Randall offers straight-up figuration, contrasting with Dorothy Riester’s “Audience,” which depicts eight figures, each of whom has ultra-short legs and an elongated upper body. Riester is celebrated as a co-founder of Stone Quarry Hill Art Park in Cazenovia; “Audience” documents her considerable talent as a sculptor.

The artworks are accompanied by texts discussing changes in ceramics during a five-decade period and pointing out that many of the artists represented in Key Figures took part in the Ceramic National exhibits staged at the Syracuse Museum of Fine Arts, the Everson’s predecessor. A couple of the national competitions appeared at the Everson but for various reasons the Ceramic National has declined in importance.

Such information supplies a useful historical context. However, this isn’t the end game for Key Figures. It also presents works by contemporary artists such as Jessica Brandl, Cristina Córdova and Alessandro Gallo.

Cordova depicts a stand-up figure, a shirtless man in a classical pose. He’s not a Greek god; rather, the work profiles a man who’s distressed, perhaps even in a state of melancholy.

Gallo is known for his hybrids, figures combining an animal’s head and a human body. At the Everson, “Under the Skin” merges a lizard’s head, a torso covered with tattoos and camouflage pants. Similarly, “Chris” has a buffalo’s head and wears a hoodie, flannel shirt and jeans. These aren’t novelty items; Gallo is investigating the human condition.

The inclusion of contemporary artworks not only introduces viewers to some important current-day artists but also helps make a larger point. Key Figures, in its survey of the period 1932 to 1972, emphasizes the idea of ceramics as a big-tent discipline open to straight-up figuration, works with an Art Deco sensibility and social realism. That discussion is expanded by including contemporary artists who explore identity and psychology in their artworks. Finally, there’s a basic but important conclusion: Ceramics both changes and links to the past.