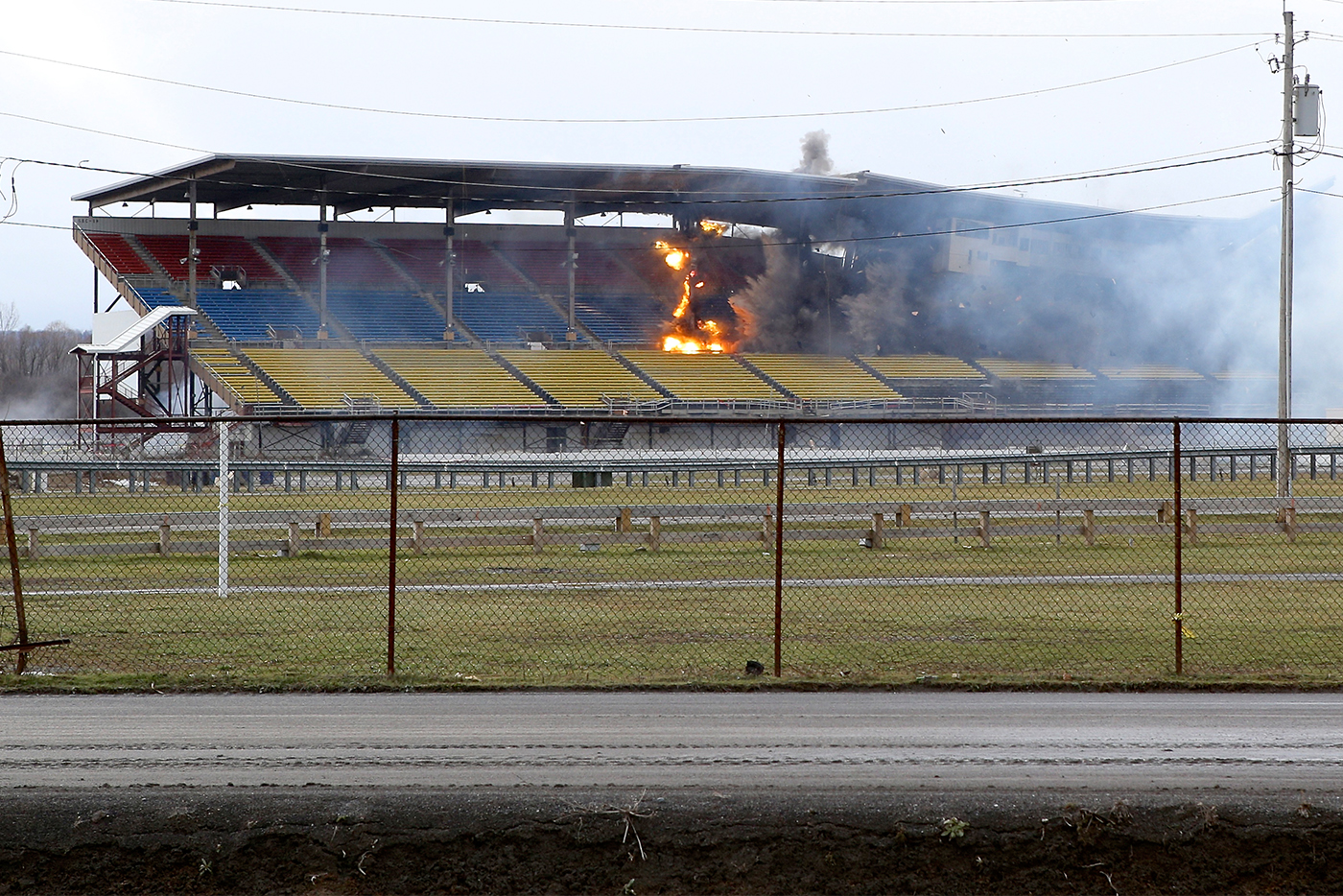 The Grandstand is definitely missing — and still missed by fair fans.

“Every time they would come, my entire family would go,” she says. “And I have five siblings, so it was always nice to get everyone together for a change. We would spend the entire day at the fair sightseeing, so it kind of started to be a tradition.”

Sternank has been seeing shows at the Grandstand for 25 years — since she was born — but after its demolition in January, that is no longer possible. When the Grandstand debuted as a music venue in 1978, it hosted seven shows including Frank Sinatra, Pat and Debby Boone, Kenny Rogers and The Osmonds. The Grandstand’s 2015 swan song roster featured Eric Church, Hank Williams Jr., Patti LaBelle and comic Jim Gaffigan; meanwhile, the State Fair’s Chevy Court loaded up with more than 20 acts that presented free concerts.

This vast difference did not go unnoticed by the State Fair’s executives, who decided to demolish the Grandstand with the help of a $50 million grant from Gov. Andrew Cuomo and the State Legislature.

State Fair spokesperson Dave Bullard says 2014 was the Grandstand’s most popular lineup in some time, with eight acts from Pitbull to Carrie Underwood to Journey. Yet they still lost $1 million.

“We can’t sit there and justify deficits,” he says. “The business of being in the grandstand business for fairs is not financially viable anymore.”

Another reason the Grandstand was not pulling the same weight it did in the past was because of its state of disrepair, Bullard says.

“Put yourself in the artists’ shoes,” he says. “You spend half the year or more on the road going from town to town. You could go to a makeshift facility with a makeshift stage, like the Grandstand, or you could go to a place set up for your convenience.”

Size was also a factor. The Grandstand had a 17,000-person capacity when totally full, while Chevy Court, the fair’s free venue, can hold up to 34,200. The fair is investing a little more than $1.5 million for Chevy Court’s 2016 lineup, Bullard says, so the shows will be able to attract larger crowds at a lower cost now that the Grandstand is gone.

Jim Koplik, president of Live Nation of Upstate New York, says the booking was an intensive but rewarding task, especially regarding the State Fair’s various daily themes, such as Women’s Day, Six Nations Day and Dairy Day. “It’s 23 shows on certain dates and the fair has certain requirements on a day-by-day basis because it needs to link into their theme of the day,” he says. “It’s not an easy process but we did well.”

Sterbank says locals who are fair regulars might be turned off this year due to the Grandstand’s absence. “I had a lot of great memories there growing up, and it added to the atmosphere of the Midway,” she says. “I think it not being there this year is going to take away from the fair. I wouldn’t be surprised to see the attendance go down.”

An RV park and a larger Midway will replace the 65 acres on the fairgrounds where the Grandstand once stood. The park has already hosted a national RV touring show, and the Midway is now rectangular-shaped, when it was a triangle for many decades.

While the Grandstand holds sentimentality for many, Sterbank says there were obvious drawbacks to the Grandstand in its final years. “They did and didn’t make the right decision in demolishing it,” she says. “It was definitely outdated and the acoustics weren’t that great, but it was nice having the event center right in the middle of the fairgrounds.”

Lakeview Amphitheater, which opened in September 2015, is hosting four concerts, including paid Fair admission, during the State Fair run. Koplik says Live Nation had to ensure there was no genre-mixing between venues, as both parties would suffer.

“The main concern was making sure we didn’t book the same type of music that was playing Lakeview,” he says. “If we booked a country act at the fair at the same night Keith Urban was at Lakeview, it would hurt the fair’s attendance and it would hurt Lakeview’s attendance. We’ve got to make sure to balance the music types.”

Variety is the key, he insisted: On opening day, Urban is playing at Lakeview on Thursday, Aug. 25, while taking over Chevy Court will be swing band Big Bad Voodoo Daddy at 2 p.m. and pop act Kesha at 8 p.m.

Ultimately, Bullard says, utility and cost outweighed personal attachment when it came to getting rid of the Grandstand.

“I went to shows there when I was young and saw many an artist at the Grandstand,” he says. “I have great memories, too. But we couldn’t afford to keep going that way. We couldn’t continue to cover the deficits. We didn’t leave the grandstand business: It left us.”

Wouldn’t It Be Nice
Free and Fabulous
To Top