At the end of December, I noted that it has been a great year for television. That point was underscored on Sunday night, when several new, groundbreaking television series and breakout stars took home Golden Globe Awards.

The 72nd annual awards show was hosted by Tina Fey and Amy Poehler for the third consecutive year. The two funny women-slash-besties have said that this is their last year, despite the overwhelmingly positive reception of their spectacular hosting skills. We’ll see, ladies. We’ll see. 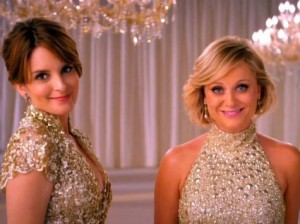 This year’s opening monologue included a joke about Bill Cosby, and a nod to Amal Alamuddin, the brilliant and accomplished woman who conceded to take George Clooney as her trophy husband this fall.

“Amal is a human rights lawyer who worked on the Enron case, an adviser to Kofi Annan on Syria and was appointed to a three-person commission investigating rules of war violations in the Gaza strip,” Fey said. “So tonight her husband is getting a lifetime achievement award.”

The Golden Globes honor the best in film and television over the preceding year, as determined by the roughly 90 members of the Hollywood Foreign Press Association. Of the 25 awards, 11 are given to TV series and their stars.

If there is an acclaimed TV drama you should be watching that you’re not already watching, it’s The Affair. The steamy Showtime series plays with time and perspective in an exploration of the nature of truth and love. It stars Ruth Wilson (Luther) and Dominic West (The Wire) as the straying pair, and Joshua Jackson (Fringe, Dawson’s Creek) and Maura Tierney (The Good Wife, ER) as their respective partners. At Sunday’s awards show, the series was deemed the best TV drama, and Wilson won the award for best lead actress in a TV drama.

West probably would have won best actor in a TV drama, but he was outclassed by the inimitable Kevin Spacey. Spacey, whose resume is littered with only a handful of TV movies and one-off TV roles early in his career, has taken the industry by storm in recent years with his brilliant portrayal of southern political animal Frank Underwood on House of Cards. But, despite his seven previous nominations (how he didn’t win for American Beauty or the first season of House of Cards will forever be beyond me), this is Spacey’s first Golden Globe.

Another dramatic actor whose win could not have been more deserved was Joanne Froggatt, who was recognized as best supporting actress in a series, miniseries or TV movie for her role as Anna Bates on Downton Abbey. Early in the fourth season, Froggatt’s character was raped and grappled for several episodes with the anguish and guilt that many survivors feel. Her performance was superb, further elevating an already great show. In her acceptance speech, Froggatt acknowledged the survivors whose struggle she portrayed.

“I received a small number of letters from survivors of rape,” she said. “One woman summed up the thoughts of many by saying she wasn’t sure why she’d written but she just felt in some way she wanted to be heard. I’d like to say, I heard you and I hope saying this so publicly in some way means you feel the world hears you.”

Perhaps most notable and encouraging were the nominations and wins in the comedy categories. Gina Rodriguez, the star of The CW’s Jane the Virgin, won the award for lead actress in a TV comedy or musical. In her warm and honestly emotional speech, the 30-year-old Puerto Rican actress gave a shout-out to the Latino community. 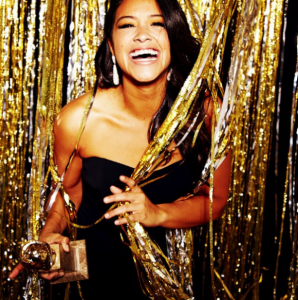 “This award is so much more than myself—it represents a culture that wants to see themselves as heroes.” She later told Entertainment Weekly, “We are dealing with a society that is so diverse, so beautiful and so human. We need to remember that we have the same stories, and see it as such.”

Within the realm of beautiful human stories is the phenomenal Amazon series Transparent, which dramatizes (in a sweet and darkly comedic way) an older person’s gender transition and the reactions and struggles of her flawed but loving family. The expectations-shattering series won the Golden Globe for best TV comedy or musical, and its star Jeffrey Tambor won best lead actor in a TV comedy.

It’s no secret that we are living in a new Golden Age of TV. There is great content everywhere, and it is challenging stereotypes and breaking down barriers left and right. In the best TV comedy category, Transparent was up against three female-led shows (Orange Is The New Black, Girls and Janet the Virgin) and Silicon Valley, a high-value sitcom about tech nerds. Every actor who won had never won before. The widespread recognition of emotionally and intellectually intelligent shows like Transparent and Jane the Virgin and the actors who star in them is a clear signal that we have truly turned a corner in what TV can do and be.

A full list of Golden Globe winners can be found here.