On New Year’s Day 2015, Friends was finally made available in its entirety for instant streaming on Netflix.

One test of a truly great TV series is whether or not it stands the test of time. Will the jokes fall flat ten years later? Will the outfits be a dead giveaway that this was made in (and for) another time? Is the writing good enough that outdated hairstyles don’t matter? (Note: hair always matters.) In 50 years, will the alien invaders understand why we loved it? Will they love it?

Friends, a sitcom about six twenty-somethings living in New York City, was created by David Crane and Marta Kauffman, and pitched to NBC with this premise: “It’s about sex, love, relationships, careers, a time in your life when everything’s possible. And it’s about friendship because when you’re single and in the city, your friends are your family.” The writers, both thirty-somethings, were “looking at a time when the future was more of a question mark,” Kauffman told Matt Lauer in a Dateline interview in May 2004, the day before series concluded its ten-season, 236-episode run.

On New Year’s Day 2015, Friends was finally made available in its entirety for instant streaming on Netflix. There were some morning hiccups in the searchability of the title, but once they found it, no doubt many a hung over twenty- or thirty-something rejoiced and indulged in a good old-fashioned binge. I set out to determine if a late twenty-something—who was six when it premiered, and just shy of 16 when it ended—could still identify with the struggles, jokes and triumphs of the Friends gang. 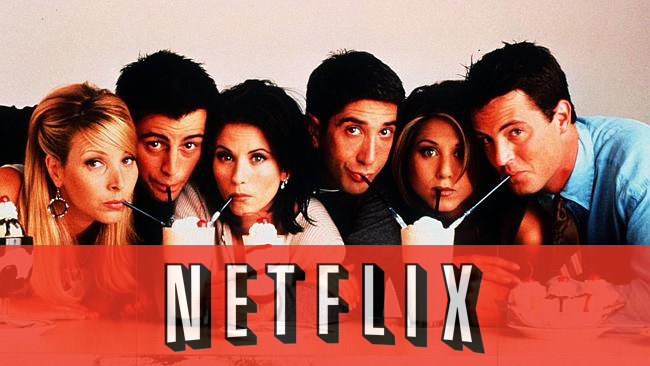 In the pilot, we first meet all six friends in the warm confines of their neighborhood coffee shop, Central Perk. With its beat up, mismatched couches and chairs, and its colorful, mismatched dishware, the Central Perk is a setting familiar to many millenials. Though the serving of refills at your seat, like at a diner, is a bit foreign to those of us used to self-serve/counter service places like Recess Coffee, the local coffee shop is still a place that twenty-somethings meet for business and pleasure alike. According to Kauffman, NBC executives initially feared that the coffee shop setting was “too hip” and that the characters were “too young” to resonate with audiences. They wanted to move the setting to a diner, like on Seinfeld, and include an older character to offer “sage advice to the kids.” Thankfully, both ideas were dropped.

Four friends—Monica Geller (Courteney Cox), Chandler Bing (Matthew Perry), Joey Tribbiani (Matt LeBlanc) and Phoebe Buffay (Lisa Kudrow)—are sitting in Central Perk, discussing impending dates and Freudian dreams—you know, the stuff of your twenties. They are joined by Ross, Monica’s brother (David Schwimmer), who has just broken up with his wife, who is a lesbian. You know, the stuff of your…never mind.

Rachel (Jennifer Aniston), a childhood friend of Monica’s, comes blustering through the door in a sopping white gown, having just run away from her own wedding. Like many moments throughout the series, this bit of over-the-top, that-would-never-happen hilarity has a kernel of truth to it. What twenty-something hasn’t awoken one morning and thought, ‘my God, I need to start over’? For those of us who entered the working world in the midst of the Great Recession, hoping our college degrees would get us good jobs only to find ourselves shifting gears or biding time (and amassing debt) in graduate school, that brick wall, pick-up-the-pieces-and-keep-chugging feeling is as familiar as those beat up couches. Their world may be small, but to many millenials, it will be immediately familiar. 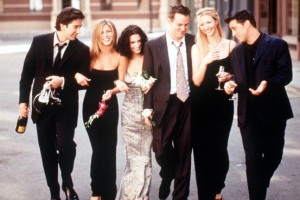 The Friends‘ New York is a prosperous, privileged, pre-recession, pre-9/11, pre-non-smoking New York. It’s also a very white New York. The show, much like other shows of the ensemble formula, suffers from its lack of diversity. In an interview with the Chicago Tribune in 1996, Brown University Professor Sasha Torres asserted that sitcoms like Friends are “figuratively and narratively trying to make urban spaces safe for white people” —meaning, to make racially and culturally diverse places like New York City seem a little less “scary” for the suburbanites who’d like to imagine themselves living the urban life. The lack of racial diversity is not all that surprising—it has a long precedent. What is surprising is that, twenty years later, the oversight hasn’t entirely corrected itself. Though much has changed in the past two decades in the way twenty-somethings are portrayed on television, the race issue has not quite caught up. If New York ensemble sitcoms like How I Met Your Mother and Girls are any indication, there is still a surplus of whitewashed TV for white people out there. If the alien invaders saw this, they might not understand that people of color are a prominent (and growing) part of our society.

Luckily, shows like Brooklyn Nine-Nine and Community are catching on (if not quite there yet), and black-ish is finally reintroducing us to the black sitcom. Hopefully, the diversity boom in TV drama will migrate to TV comedies post haste.

In spite of its flaws, Friends is still a great show. The writing holds up. The jokes land. The difficulty of starting your career and growing up, and the sentiments that come with watching new and old friends grow and change still make sense. Sure, the hairstyles poof like only ’90s hairstyles can and dad jeans abound, but I don’t mind. If you find yourself missing Ted, Lily, Marshall, Robin and Barney, but aren’t quite ready to forgive the transgressions of the HIMYM finale… Haaaaave you met Friends?

Winter Binge Pick: Get addicted to Netflix’s ‘The Killing’ reboot
Golden Globes Winners Are Evidence of a Brave New World in TV
To Top