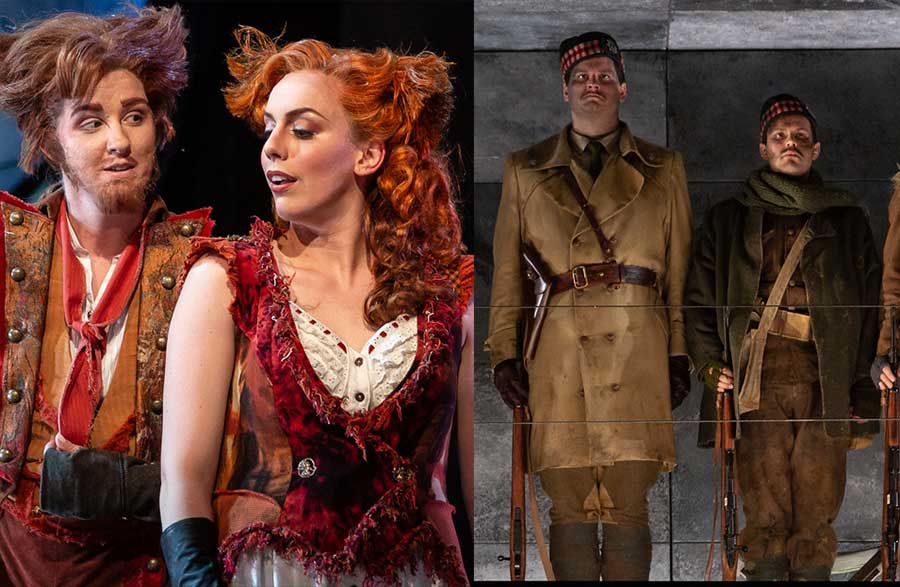 It’s our classiest cultural commute: Cooperstown’s world-class Glimmerglass Festival is the only venue under a two-hour drive from most parts of Onondaga County. While producing operas, both familiar and rarely done, is the main activity at the venue’s Alice Busch Opera Theater, it’s called a festival for good reason.

The top draws of the summer are Leonard Bernstein’s blockbuster musical West Side Story, which has sold out all remaining performances, and Gioachino Rossini’s The Barber of Seville (Aug. 3, 9, 11, 13, 25), which is always one of the three or four most popular comic operas.

One of the most widely performed new operas in recent memory, Silent Night’s one liability is its misleading title. Not only is Franz Gruber’s carol never performed, the opera is anything but comforting.

Inspired by the spontaneous “Christmas truces” in the trenches during the first year of the war, 1914, Campbell’s epic libretto takes its shape from the Academy Award-nominated 2005 French film Joyeux Noel (“Merry Christmas”), another misleading title. It evokes a movie in other ways, with 28 singers (two of whom are female) spread across three platforms and many changes of scene, from the battlefield to ballrooms.

Beating the cinema at its own game, Silent Night’s combat scenes in the first act are more brutal and upsetting than those found in the greatest World War I films, such as Stanley Kubrick’s Paths of Glory, or landmark stage productions like Michael Morpugo’s War Horse. Thank director Tomer Zvulun and lighting designer Robert Wierzel: Their contributions are not mere technical magic but rather a demonstration of the horror that caused adversaries to stop killing each other briefly and bond.

Puts’ score is necessarily eclectic and allusive because the action crosses the battle lines of German, French and Scottish troops. Conductor Nicole Paiement deftly navigates the constant changes of tone, resisting the slippery slope to sentiment, a criticism of the French cinematic source material.

In the first scene Puts dares to write an Italian-language love duet in the style of Mozart (or possibly Gluck). The scene is an opera house in Berlin where two stars, soprano Anna Sorensen (coruscating Mary Evelyn Hangley) and tenor Nikolaus Sprink (Arnold Livingston Geis), are in their glory. A harsh voice barks that the country is at war. Nikolaus is drafted and sent to the front. The lovers are the thread tying together more than two hours of action.

Simultaneously, other soldiers prepare to go to the front. We see two brothers in a Scottish village, as William Dale (bass baritone Maxwell Levy) cajoles his brother Jonathan (Christian Sanders) to join up, but William becomes an early casualty, embittering the brother. In a Paris apartment Lieutenant Audebert (baritone Michael Miller) leaves his pregnant wife but takes with him the orderly Ponchel (Conor McDonald), the only comic character in the large cast.

There was no plan for how music would transcend the trenches. First it is a duet in German from Nicholas and Anna, and then bagpipes from the Scottish quarter. After fearful hesitation the troops greet one another, sing songs, take group pictures, and gather the dead from no man’s land.

The carnage returns with a vengeance, however, and generals on all sides consider the brief truce to be traitorous and reassign the men to likely death, the Germans to the frozen eastern front and the French to Verdun.

The Cunning Little Vixen, composed nine decades earlier, takes place just after World War I. It is from Czech composer Leos Janacek (1854-1928), whose stock has been rising recently. He started as a late romantic who moved on as a vigorous late bloomer, writing his most interesting work in the last 10 years of his life. Here he displays the rhythmic complexity of a post-romantic modernist. He was 70 at the premiere of Vixen in 1924.

Once treated as a curiosity, an orchestral tone poem with vocal interludes, Vixen is revived frequently now. Last year fabled designer Peer Sellars mounted a much-feted realistic production in Berlin. Given that the story is a beast fable for adults, director E. Loren Meeker wisely instructed costumer Erik Teague to let his imagination soar. As with Silent Night, audiences are likely to remark most about the prominent production values, such as the costumes for the dragonflies, the Mosquito and the title Vixen (Joanna Latini) herself, even above the glorious score.

The “cunning” of the title is a make-do translation of the Czech word bystrouska, which is better rendered as “sharp-ears” implying sly resilience rather than aggression. She is a force of nature, and there is no fooling with her. In the opening scene a Forester (star baritone Eric Owens) captures the Vixen while still a girl (Lilly Grady) and keeps her as a pet. Grown to maturity as a soprano, the Vixen chafes at her confinement amid boring, conservative pets, like the dog (Katherine Maysek), and chews through her rope to escape to freedom. Soon she links with a boy Fox (Alyssa Martin in a trousers/furry paw) and takes over the nest of the hated Badger (Zachary Owen).

Things don’t work out. In the last act the Forester sees a fox muff in the home of the lusty Poacher (William Clay Thompson) intended for his Gypsy bride. The bittersweet funeral music for the Vixen’s passing Janacek later chose for his own requiem.

The Glimmerglass Festival takes place at the Alice Busch Opera Theater, a few miles north of Cooperstown on Route 80. It is about a 75-mile drive east from Syracuse on scenic Route 20. For ticket information, call (607) 547-2255 or visit Glimmerglass.org.

Sidewalk strutting at Street Painting 2018: And the winners are…
Blowing it up from the inside: How punk rock, cartoons influence artist Tommy Lincoln
To Top