Getting Graphic at ArtRage

ArtRage Gallery‘s current show features work by an artist deeply concerned with human rights, war and peace, and other issues.

The Global Citizen: Graphic Art of Marlena Buczek Smith displays her giclee prints, which are both visually and thematically interesting. The exhibit highlights the artist’s visual strategies, her “hooks” for catching a viewer’s eye.

In a piece dealing with slaughter of elephants in Africa, Buczek Smith depicts an elephant but replaces the tusks with $100 bills. She also has a taste for sparse work, such as the piece portraying a paper bag in a shopping cart, surrounded by lots of white space. It influences viewers to consider people who have no permanent home. 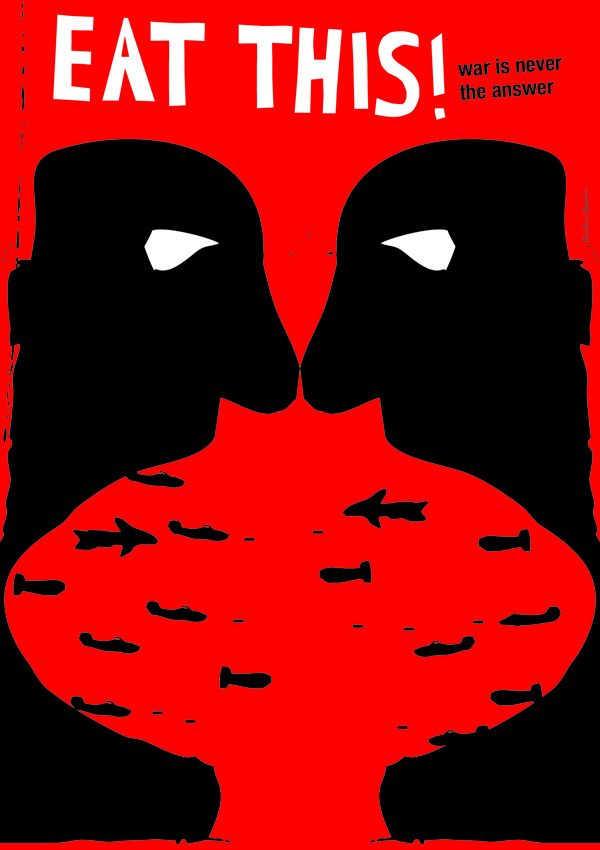 Other works reflect Buczek Smith’s penchant for variety. To deal with the consequences of the 2010 oil spill in the Gulf of Mexico, she created an image of a bird drenched in oil; that creature is small and vulnerable. In discussing the scarcity of potable water in Somalia, East Africa, she depicts a man drinking from a bottle of water. One last drop heads toward his mouth, and it’s implied that the bottle is empty.

There are visceral, hard-edged prints. A piece discussing torture presents two stumps, sections of a lower leg with one longer than the other. They are joined by a dark piece of cloth, as Buczek Smith communicates a sense of people being coerced and diminished. A second work, which deals with authoritarian governments in Africa, shows a man with a blindfold shaped like a gun and draped over his eyes.

Over the years, Buczek Smith has created numerous prints dealing with war and peace. The ArtRage show has five works in that vein, including “There’s No Victory in War.” It presents a group of armed, faceless men standing above a figure lying on the ground. Another work combines an image of two hands, with a tiny cross between them, and a quote from the ancient Greek philosopher Plato: “Only the Dead Have Seen the End of War.”

Elsewhere, “Road to Destruction” portrays a figure crushed by two walls closing in on him. “No More Wars,” one of the best works in the exhibition, depicts two hands, one holding a coffin and the other a dead dove.

In addition, the show has a work referencing the Auschwitz concentration camp; it shows four hands grouped around a heart. And although the exhibit concentrates largely on black-and-white pieces, it does have an artwork focusing on prostitution and trafficking of women around the world. There are six figures in green, black, blue and other colors. A second piece, “Rescue Women from Violence,” merges hands and vivid black and red colors. 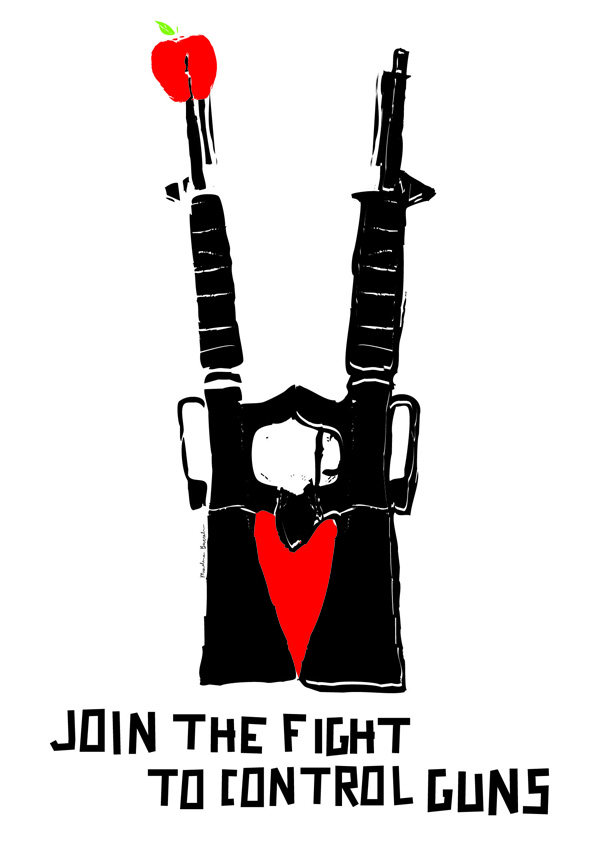 While the various artworks easily develop a notion of Buczek Smith as a “Global Citizen” concerned with international issues, those two words have other implications. Buczek Smith herself was born in Poland, moved to the United States and now lives in New Jersey.

Moreover, she takes part in exhibits around the world. During the next several weeks, she will have works in group shows staged at the Museum of Modern Art in Toyama, Japan; in Dresden, Germany, where an international poster exhibition will be held; and at the University of Southern Mississippi.

However, the ArtRage exhibit has a definite advantage because of its showcasing of Buczek Smith’s pieces. It provides a sense of an artist pushing her work, continually looking for new avenues for her insights. Most importantly, it gives viewers an opportunity to become familiar with that work and to appreciate its depth.

Gangi Jumping at Edgewood
Everson Explores Its Own Riches
To Top