When she became director of the Everson Museum of Art, Elizabeth Dunbar said she wanted to integrate the museum’s collection into many future shows and to explore new ways of exposing and celebrating the museum’s holdings. Three Graces, the Everson’s primary exhibit for fall and early winter, and Gods and Monsters: Three Centuries of Portraiture both illustrate that Dunbar was dead serious in her discussion of future plans.

Three Graces pivots on a trio of New York City-based artists either creating work on site or reacting to aspects of the collection. Tony Feher has done installations outside the museum and on the first floor. In both instances, dozens of long, long segments of string hang in the air and communicate a joyous mood.

Carrie Moyer, meanwhile, has exhibited her abstract paintings at various museums and galleries. The current exhibition, however, displays works she created specifically for Three Graces. Along the way, she considered pieces from the collection that either have influenced her or provide an avenue for viewers to reflect on notions of abstract art. Thus, large works by Helen Frankenthaler, Dorothy Hood and William Terrence Williams hang on gallery walls. 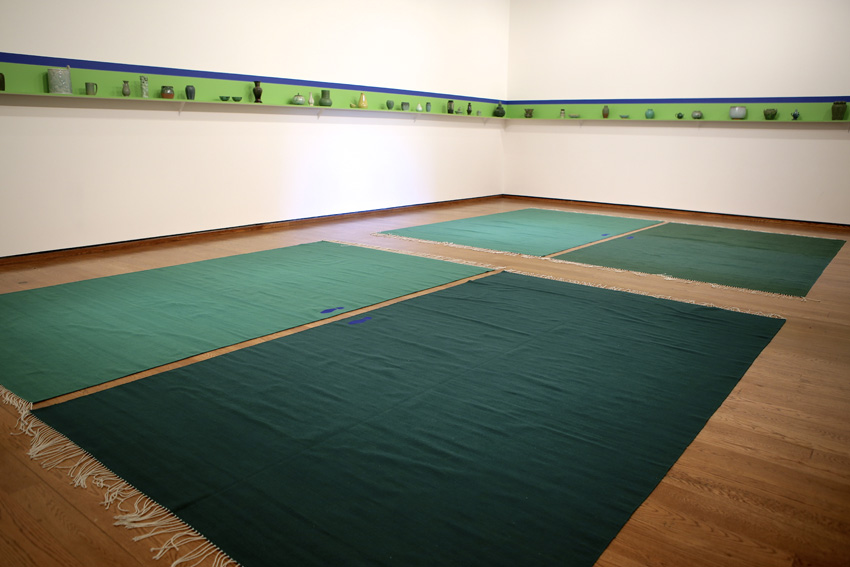 That said, Moyer’s participation in Three Graces doesn’t signal her embarking on a radically different creative path. She’s the same artist who marries painting and graphic design, who incorporates shadows, glitter and varied shapes into her paintings. Most of all, she has a penchant for pumped-up colors and the ability to turn them loose on canvas.

“Cool Blaze” mixes striking red, orange and green colors on the right side and calmer colors, like blue, on the left. In “Cloud Comb for Georgia,” there’s a flow of colors layered over each other. “Maiden Voyage,” a small piece, has orange and green smudges against a blue background. These, and other pieces, demonstrate Moyer’s capacity for staying on the move, for interpreting color and other elements in different ways.

In another gallery, Polly Apfelbaum has assembled artworks that will initially perplex some viewers. For starters, a large abstract painting by Morris Louis occupies an entire wall. In the middle of the room, there are colorful rugs made by Apfelbaum herself. And on a long table, 226 ceramic works, all from the Everson’s collection, encompass a variety of forms: cups, bowls, vases, jars organized by color. They were created at Syracuse China, at Roseville Pottery and Jugtown, at the New Mexico pueblo where Maria and Julian Martinez lived, and other venues.

This setup isn’t intended to set a world’s record for most ceramic pieces on a table or to merely call attention to ceramics, the Everson’s signature collection. Rather, Apfelbaum seems to be investigating how various artworks are valued and assessed. Is there a huge gap between how many museums and galleries have viewed abstract paintings on one hand and ceramics on the other? Does placing more than 200 ceramic works on a table suggest something of substance when three or four pieces would have seemed puny?

At the same time, Apfelbaum isn’t delivering a lecture. She’s assembled a series of artworks intended to provoke, prod and implore viewers to draw their own conclusions. And she’s taken great care to make the gallery space visually intriguing. The rugs are outright pretty and function almost like paintings on the floor. In a sense, they mediate between the Louis painting and the ceramic pieces.

In a second gallery, the artist combines a Louis painting, four green rugs, and 67 ceramic pieces, all green, on a shelf. Once again, the ceramics were made by a diverse roster of artists: Adelaide Alsop Robineau, Weller Pottery, Iranian and Mexican potters, and Peter Jones, an artist from the Onondaga Nation.

Gods and Monsters is a type of show that sometimes spins out of control. This time, that didn’t happen. The exhibit is coherent, crisp and full of interesting artworks. It traces the evolution of portraiture from highly formal paintings, depicting members of the nobility and wealthy merchants, to a melange of photos, lithographs and other media.

The show is comfortable with contrasts: Gilbert Stuart’s portrait of George Washington and Andy Warhol’s lithograph portraying Elizabeth Taylor; a traditional portrait of Adam Swarth done centuries ago and Milton Avery’s very nontraditional self-portrait; William Wegman’s print depicting his dog, Man Ray, and everything else in the show. 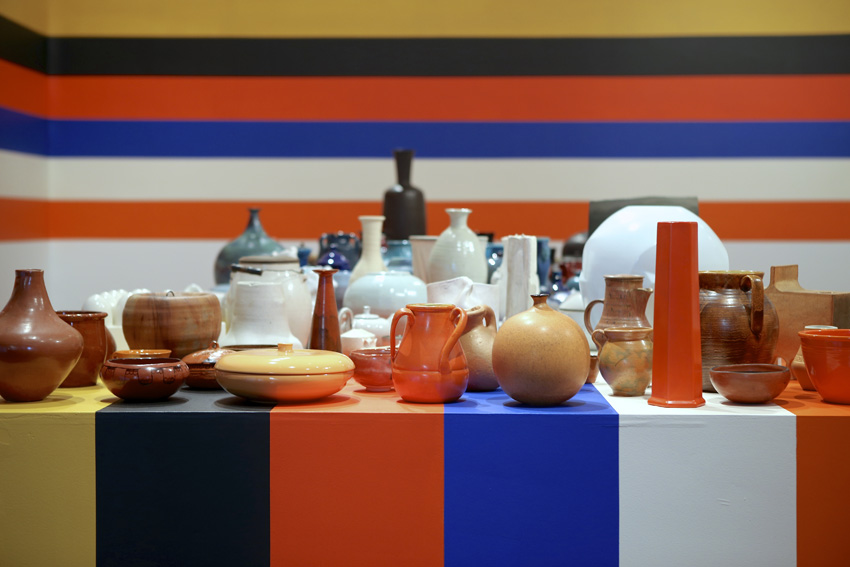 The exhibition moves in various directions but makes it all work. It goes local with images from Simpson Kalisher’s series “The City Seen,” shot in Syracuse during the early 1970s; Toren Beasley’s photo of the late Anna Mae Williams, a longtime advocate for poor people locally; and Gary Trento’s portrait of Jack White, an artist who lived in the Syracuse area for many years before moving to Texas.

The show travels to 1920s Germany for August Sander’s image of a bricklayer’s mate; to Ireland for Syracuse artist Doug Dubois’ photo of Roisin, a teen girl in Russell Heights, Cobh; and to Mexico for a shot of a young woman, Margarita, at Bonampak, a Mayan archeological site. That last image was taken by Manuel Alvarez Bravo, an influential Mexican photographer.

Gods and Monsters deals with portraiture in depth but does so in a highly engaging manner. Beyond its own merits, it reminds viewers to think briefly about the Everson’s permanent collection, the source for every work in the exhibit.

The current lineup clearly reflects a strategy based on fully utilizing the Everson’s collection and on fresh approaches to organizing large-scale exhibits like Three Graces. It provides a positive beginning for Dunbar’s curatorial work and hints at a new direction for future showcases.

Getting Graphic at ArtRage
Artistic Gifts for the Holidays
To Top