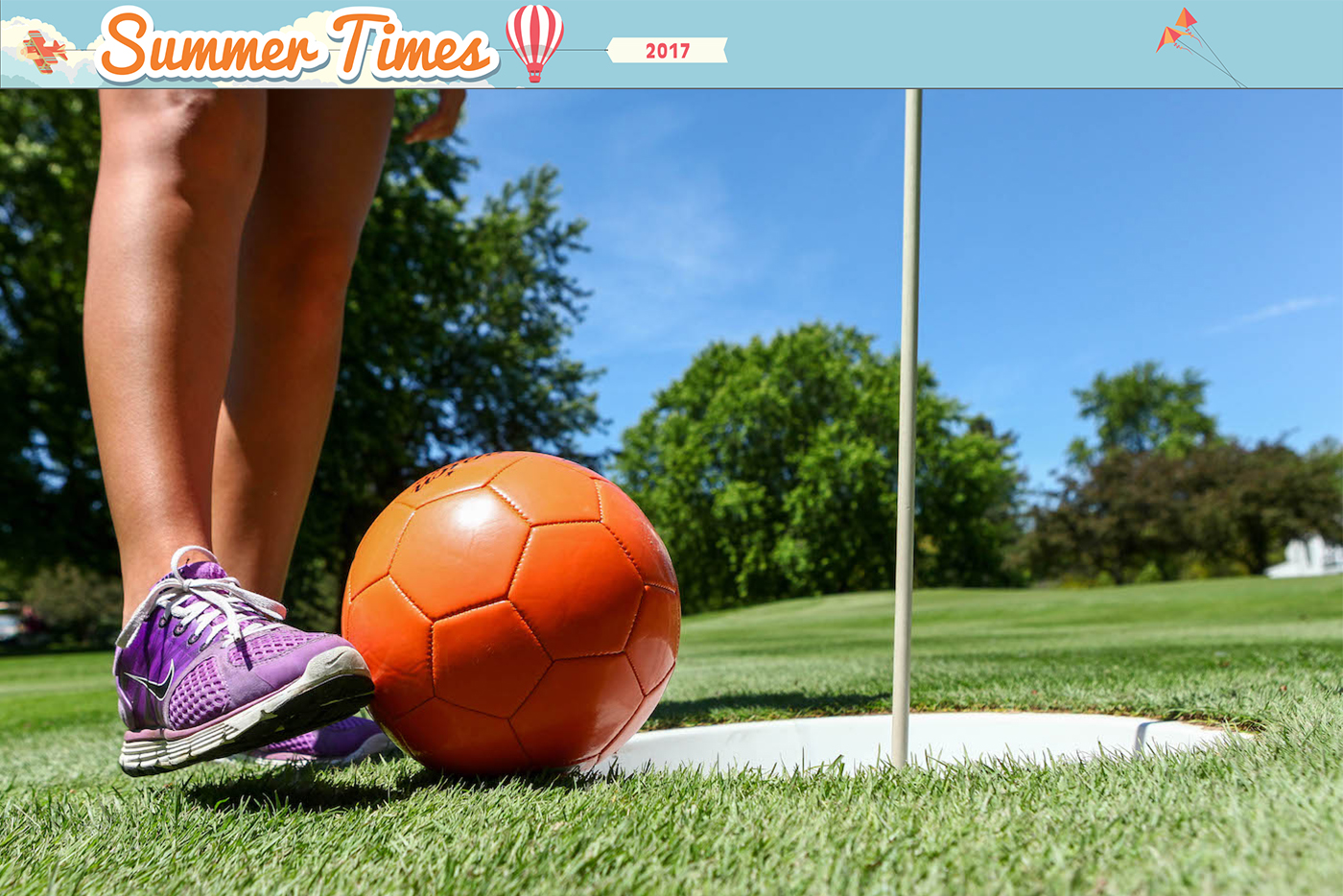 Summer leagues are in development for cornhole, foot golf and bubble ball soccer.

The first official day of summer is Wednesday, June 21, and with the warm weather the season brings, the desire to engage in physical activity is potent. Many will join summer sports leagues such as kickball, softball, volleyball and more.

For those looking for something a little more exotic, those options are out there, albeit just a little harder to find. A trio of local organizations offer sports that are off the beaten path and should help inspire some uniqueness this summer. 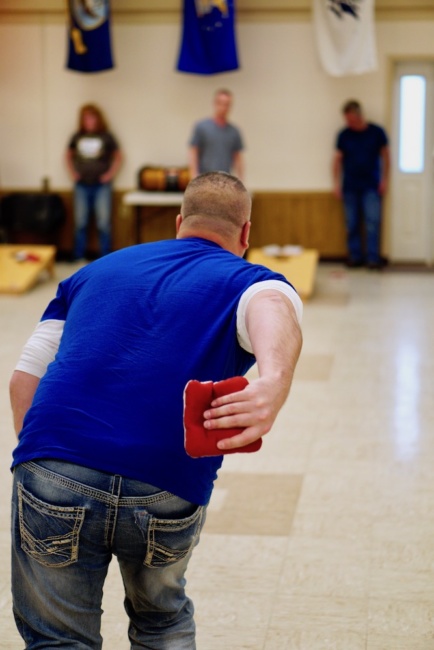 Shayne Coyne of CNY Cornhole gets into the action at the Baldwinsville VFW. Photo by David Armelino

Anyone can play cornhole. If you’re able to toss a hand-sized bean bag a short distance, then cornhole’s your game.

Shayne Coyne is the show runner for CNY Cornhole, a group he inherited from a friend around five years ago. CNY Cornhole takes many different forms in its outreach efforts, which include tournaments, benefits, corporate events and league nights, which Coyne provides year-round.

Coyne is now in the middle of his spring league, hosted at the Baldwinsville VFW, 50 Salina St., which is also where his fall league will be held. Those two leagues each run 11 weeks, including playoffs. His summer and winter leagues run eight weeks and are housed at Sharkey’s Bar and Grill, 7240 Oswego Road, Liverpool.

Coyne said that while his leagues generally consist of players over age 21, all ages are welcome. “Sharkey’s is obviously a bar,” Coyne said, “and I have had people under age 21 play in the league, and I’m more than happy to have them, understanding they’re in an establishment that sells alcohol.”

Each league consists of at least two divisions, depending on how many people join, that are divided up by skill level to ensure everyone is on an even playing field. “We like to teach a lot of things in the league, too, so players know what to do and how to throw,” Coyne said. “Because there is a strategy (to play cornhole).”

To supplement league nights, Coyne presents events and tournaments around Central New York, all of which can be found under the events tab at facebook.com/cny.cornhole.9.

Coming up on July 9 is a benefit tournament to raise money for Relay for Life at Limp Lizard, 4628 Onondaga Blvd., in conjunction with Fade Barbershop, 4656 Onondaga Blvd. A maximum of 48 teams will compete, with $50 covering the entry fee and a barbecue dinner platter. For more information, visit bit.ly/2rDOnlQ.

Have you ever wanted to settle a friendly disagreement by letting off some steam in a fun, controlled manner? That’s what Mark Constantino first thought of when his brother sent him a video of bubble ball soccer being played in Italy.

Bubble ball soccer is exactly how it sounds. People of all ages don an inflatable transparent ball to play soccer in while bouncing off one another without the risk of injury.

The concept intrigued Constantino enough to start Bubble Ball Extreme, based in Rochester. “I started to do the research and got excited about it,” Constantino said. “Before I knew it, I found a really good distributor, and we bought a set of 10 bubble balls before people even really knew it as bubble ball soccer.”

Like many startups in the digital age, social media played a large role for Constantino in getting the word out; soon afterward, groups of people began renting out the suits for various gatherings. Birthday parties, graduations and corporate events are just a few ways people have made use of Constantino’s service. 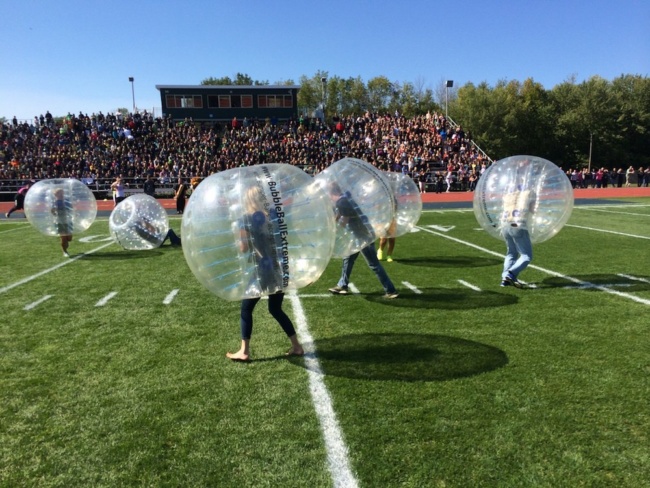 Renting the suits is what Constantino described as his company’s niche. “It’s a mobile business by design, so that it can be really functional for anybody,” Constantino said. “We come, we set up, we blow up and have fun. Then we clean up and get out of the way.”

Although the rental aspect is Bubble Ball Extreme’s bread and butter, leagues are also part of the business. Constantino said more than 600 players participated in his first-ever league at Cobb’s Hill Park in Rochester in July 2015.

“It was just so satisfying that it drew that many participants,” he said. “And it was really a great kickoff because when spectators would come to the games, or when people would just be driving by, they would see it, they wondered about it, they Googled it. And then we grew organically from there.”

Since Bubble Ball Extreme’s inception in Rochester, the business now has a franchise affiliate in Utica that covers most of Central New York. The number of suits between the two locations has grown to more than 50. Constantino said the suits are rotated out during break periods, which allows for groups of more than 500 to participate at a time.

With so many people constantly climbing in and out of the bubbles, sanitation is a reasonable concern. Constantino has a method of sprucing the bubbles during break periods, as well as a more thorough cleansing after the event is over.

“We have all kinds of organic, human-safe sprays,” he said. “We clean the interior of the bubble. We have sanitation wipes on site at all times for people who want to clean them even more than that. After all of the events conclude, we have an industrial power washer with human-safe soap, and then we just power-wash them right out.”

For information about renting the bubbles and league registration, visit bubbleballextreme.com.

Like Bubble Ball Extreme, the sport of foot golf also relies on soccer balls. Foot golf is essentially a sister sport to regular golf, with the same basic principles. And even for non-golf enthusiasts, it’s still entertaining to kick a ball around a golf course into the 21-inch holes that sit in front of the green.

Foot golf at West Hill Golf Course, 2500 W. Genesee Turnpike, Camillus, started in spring 2015 after owner Jed Rotella read about the sport in a golf-business magazine. “It brings in a younger crowd of people that we’re not seeing in golf anymore,” Rotella said.

Leagues and event arrangements are available. Although no league has yet been set up for this summer, a 2016 summer league yielded promising results.

“It was typically 20- to 30-year olds,” recalled Jed Rotella’s daughter, Diane, who is also the course manager. “It was a Friday-night one. They got a group of friends, grabbed a six-pack of beer, and they went out and enjoyed the weather.”

Jed Rotella noted that once they’re able to get a core group of people who are interested in playing in a league, the wheels will be in motion.

The Rotellas have also offered foot golf birthday parties, a corporate event for National Grid, and even a fundraiser for cancer research. Each event is different in composition, with some being more structured and having the West Hill staff provide food; others are more relaxed and don’t adhere to a specific format.

A bonus for parents with small children is that strollers are allowed on the golf course while playing.

“Anybody that I’ve talked to that’s played foot golf for the first time didn’t think it’d be as much fun as it was,” Diane Rotella said. “And then they end up coming back.”