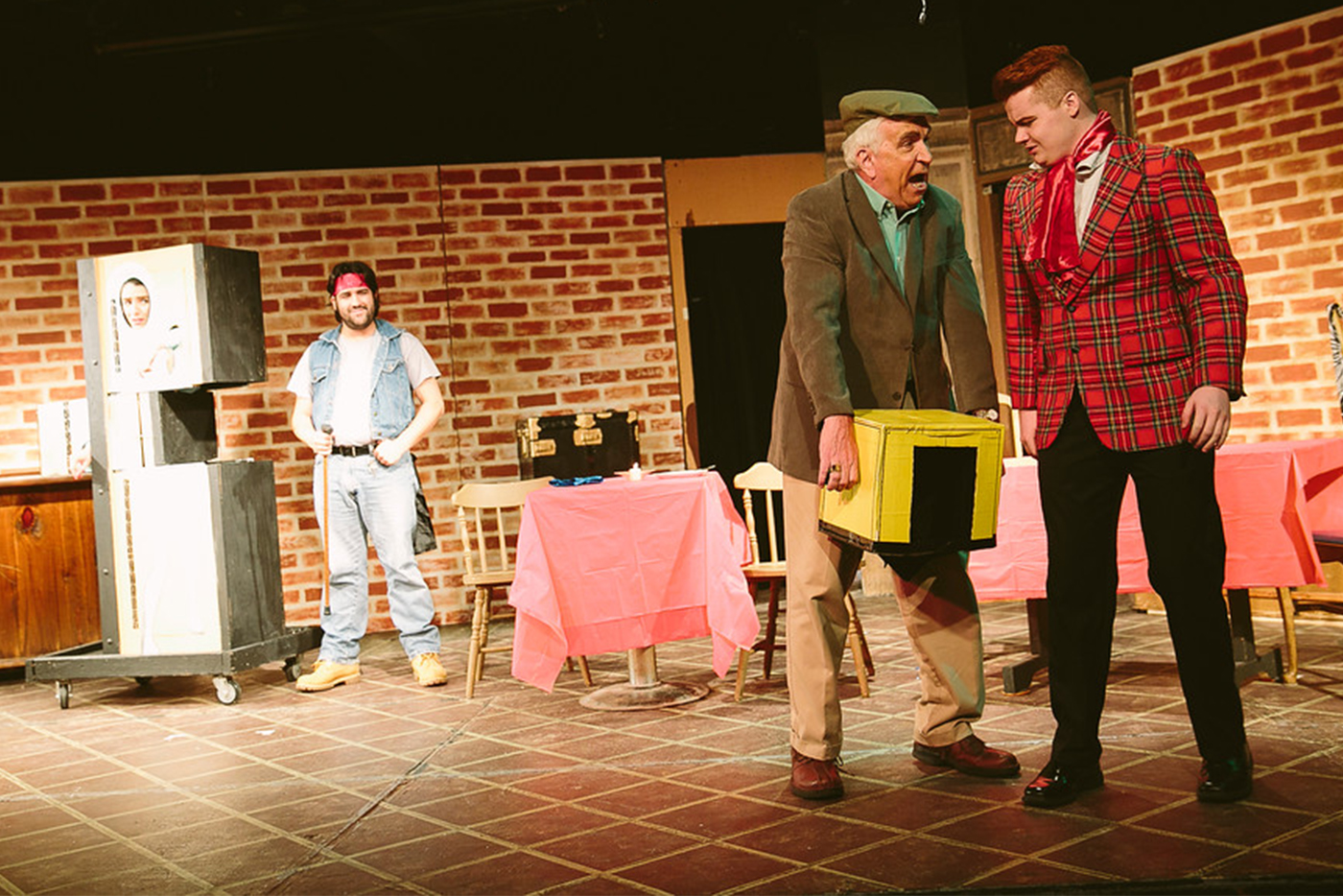 Steve Martin, the white-maned wild and crazy guy, has been on the scene long enough to have revealed many of his secrets. Despite the surface nonsense, he’s a conscientious craftsman and a closet intellectual with mordant views on the meaning of life.

For all the movies and TV, he thrives on live performance, having started out as a magician. His Picasso at the Lapin Agile, very much like a David Ives comedy, has been performed constantly for 20 years. And his Teutonic farce The Underpants was a pleasant surprise last fall at Syracuse Stage.

About the time of Picasso, Martin published a passel of one-act plays, which appear to have been in gestation a while and are rarely performed. Four are making a regional premiere at Shoppingtown’s Central New York Playhouse through Saturday, Aug. 27.

In a production featuring mostly new and unfamiliar faces, the real auteur appears to be producer Justin Polly, who also co-designed both the set and sound with wife Kasey McHale. She took on the lighting as well as three small but critical roles.

It was Polly’s idea that three directors should be first-timers with limited performing experience. Lawyer Samuel Tamburo has taken supporting roles for years, often with Onondaga Hillplayers. Colleen Dietrich was the lesbian who finds a spine in Polly’s production of The Laramie Project. And Anna Livingston is a senior at Corcoran High School, a student of company regular Greg Hipius, and president of the school’s drama club.

Polly begins with the projection of a vintage video, perhaps from YouTube, of Steve Martin in a tuxedo performing magic tricks, many of which call for him to pull unexpected objects out of the fly in his pants. He’s uproarious, of course, but the clip both supports and works against the one-acts. Each of the four has at least one reference to what could broadly be seen as a magician’s trick. Martin’s uncharacteristic deadpan and his control of tone spike up every gag.

Three of the four plays, unfortunately, suffer from the lack of controlling tone that only an experienced director can wrangle. Too often Martin’s material does not provoke the reaction the author sought, aside from the nearly wordless last one, titled The Guillotine.

The first half of the program is occupied by WASP, an absurdist satire on middle-class domesticity. Martin’s target appears to be insipid Eisenhower-era sitcoms like Father Knows Best, but the family does not enjoy White Anglo-Saxon Protestant privilege and could just as easily be Polish or Greek. As an early test of how much Dad (R.D. Miller) actually knows, his son (Collin Dean) asks him where heaven is. The old man responds confidently that it is 17 miles above earth and that the science taught in school refuting this claim is “un-Christian.” Dad’s subsequent advice to his son is literally gibberish.

We know from Picasso that Martin has been influenced by French theater, and WASP bears a certain relationship to the works of Eugene Ionesco, like The Bald Soprano. The absurdist thrust here is not to generate laughter but to expose fatuousness and cruelty. Dad prates on about his golf game, but when Mom (Elaine Boardway) returns from an offstage telephone call, brimming with delight, no one will listen to her. Soon, Dad talks over her and she is silenced.

Despairing, Mom begins to call out to a female voice (Kasey McHale), asking questions about the mysteries of the cosmos. The voice (perhaps a guardian angel?) answers softly, but the cosmos she points to is as bleak as in a Samuel Beckett play.

The long speech by Sis (Carleena Manzi, last seen as Peron’s mistress in Evita), is the best-realized passage of the production. She wants to give birth to Jesus.

In The Zig-Zag Woman, a young beauty (Katie Deferio) seeks to gain the attention of a man with whom she is smitten by having herself sawn in half. It’s an optical illusion: She stands in one of those magician’s boxes in which the middle appears to have been pulled sharply to left. A bemused older man (John LaCasse) sitting nearby thinks the ploy might work because he won the woman he married by putting himself in a bottle, like a model clipper ship. But he adds that love is a promise delivered already broken.

Equally dour is Patter for the Floating Lady, in which a lovesick, somewhat self-centered magician (R. Bernard Ment) tries to win back the love of his diffident assistant Angie (Sydney Schwab) by levitating her. His hopes that she will love him for freeing her from gravity are dashed when she says love does not mean having dominion over the loved one. That Angie does indeed appear to rise is this production’s signal technical achievement.