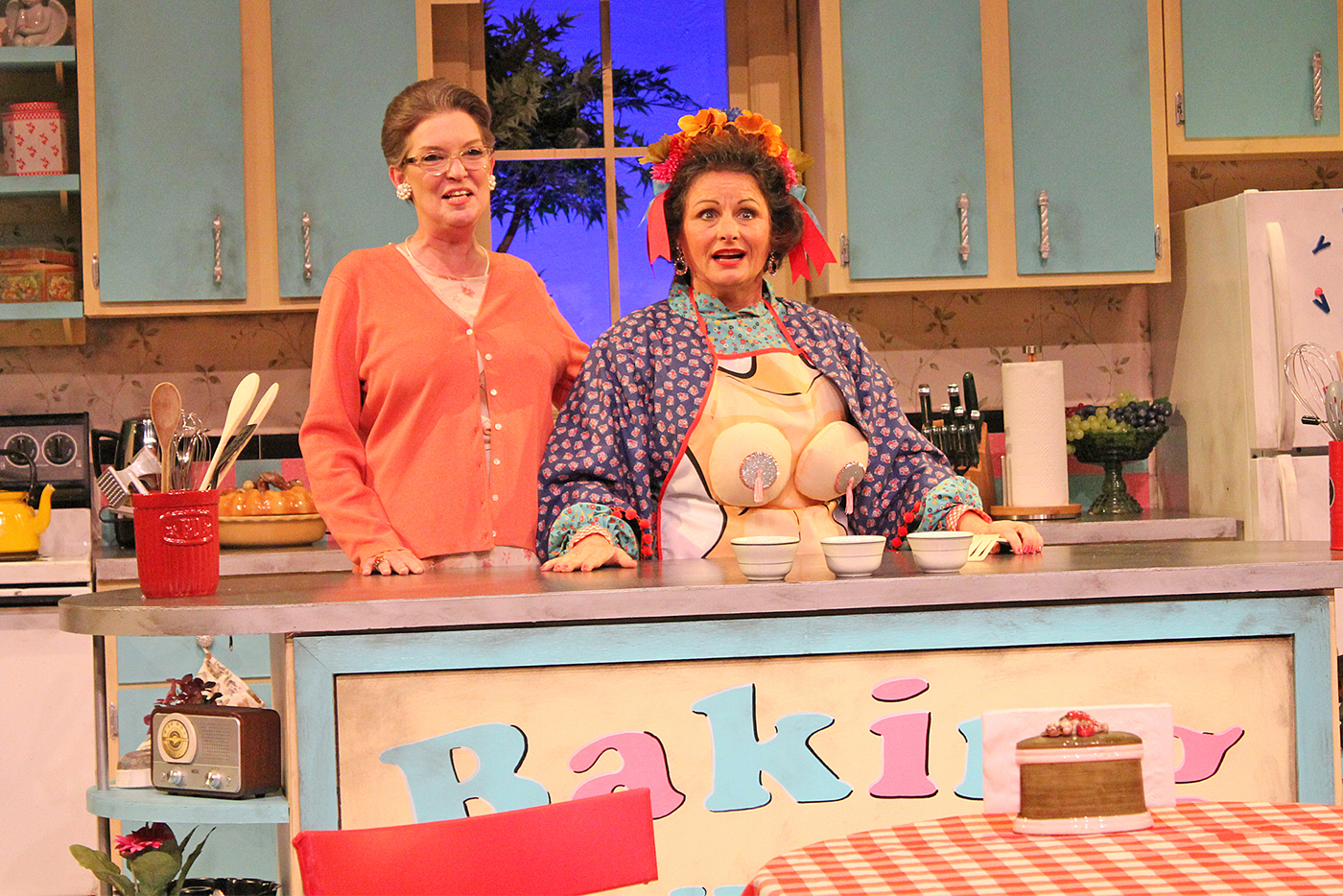 Cortland plays host to a couple of competitive chefs in “The Kitchen Witches.”

Don’t feel remiss if you’ve never heard of Caroline Smith. She’s the founder and artistic director of the Stirling Festival Theatre in a town (pop. 2,139) in Ontario, Canada, an hour’s drive west of the Thousand Islands Bridge. The Kitchen Witches premiered there in 2003, winning a Samuel French award in 2005. Since then it has been making its way across America’s theater map, generally with small-town and rural companies.

Per the playwright’s instructions, all references are local, and director Mark Reynolds has decided that Homer and Cincinnatus are the most laugh-worthy burgs in Cortland County. No measurements are given in metric, and, thankfully, nobody has to consume any poutine.

Bitchy humor between two driven women in the same calling, like fashion design or perfumery, could erupt at any time or place, but Smith sets the action during the period of low-rent cable access programming. Smith does well to retain the setting, even if anachronistic, because the insecurity of the enterprise contributes to the tension.

Two rival cooks, shorter Dolly Biddle (Diana Wilde) and the taller Isabel Lomax (Rebecca McGraw), are both of a certain age and look as though they have been riding the circuit quite a while. We know before they tell us that if this gig comes to an end, there will be no more.

Smith diverts us in the first 15 minutes by taking us down a misleading plot line. When we first meet dark-haired, round-faced Dolly, she’s doing the final segment of a solo show with an ethnic flair, Baking with Babcha. Costume designer Jimmy Johansmeyer has rigged up a mismatched horror, paisley below and oversized polka dots above, for Babcha/Dolly, who speaks in a plausible Natasha Fatale accent. As Babcha is being canceled, the only way Dolly can continue in the TV cooking show business is if she takes on a partner: Isabel, whom Dolly had, ahem, known previously.

Carl Tallent’s ultra-tacky set design becomes a part of the story. Management has refused to invest much in any cooking show and could dismiss everyone’s efforts in a blink.

Babcha’s producer is youthful, balding and anguished Stephen Biddle (Jason Matthew Shipman), who we are told is Dolly’s son. He keeps a whisky flask handy to stave off madness. When it is suggested that Dolly should stay on only if she has a sparring partner, Stephen is put in charge. Combat, as well as cuisine, with be their calling.

Comic teams such as Laurel and Hardy or Abbott and Costello are usually of contrasting physical types, regardless of their ethnicity. Dolly is the earthier and more explosive of the two, with her poisoned daggers often embarrassing Matthew. Yet with the exception of a visual gag featuring a kind of Mae West anatomically correct apron, there’s nothing here that could not have been said during the golden age of network television comedy. This sets up Isabel nominally to be Dolly’s foil, but the old girl won’t stand for it and gets plenty of one-liners for herself.

As a gagster, playwright Smith belongs to what the British call the “laundry line” school: How many can she string together one after the other? Her velocity is more rapid than Neil Simon’s, and at times Dolly and Isabel come across as Gentile versions of Don Rickles, although the evidence does not transfer well from the stage. When we learn that Dolly might be suffering from indigestion and gas, Isabel roars, “Stand back! That woman is powered with methane!”

Dolly and Isabel’s contrasting styles and tastes are enough to drive the action, but Smith also contrives a back story in which Stephen’s father dated one of the cooks but married the other. The resolution of this conflict provides a sober, melodramatic interlude before we enter the final stretch.

Director Mark Reynolds from the SUNY Cortland Drama Department drives a furious pace. Diana Wilde and Rebecca McGraw are splendid, original discoveries, neither a mimic of a known comedienne. And Jason Shipman as Matthew gives better than he gets. He turns what could have been a thankless role into a competitor of the witches themselves.