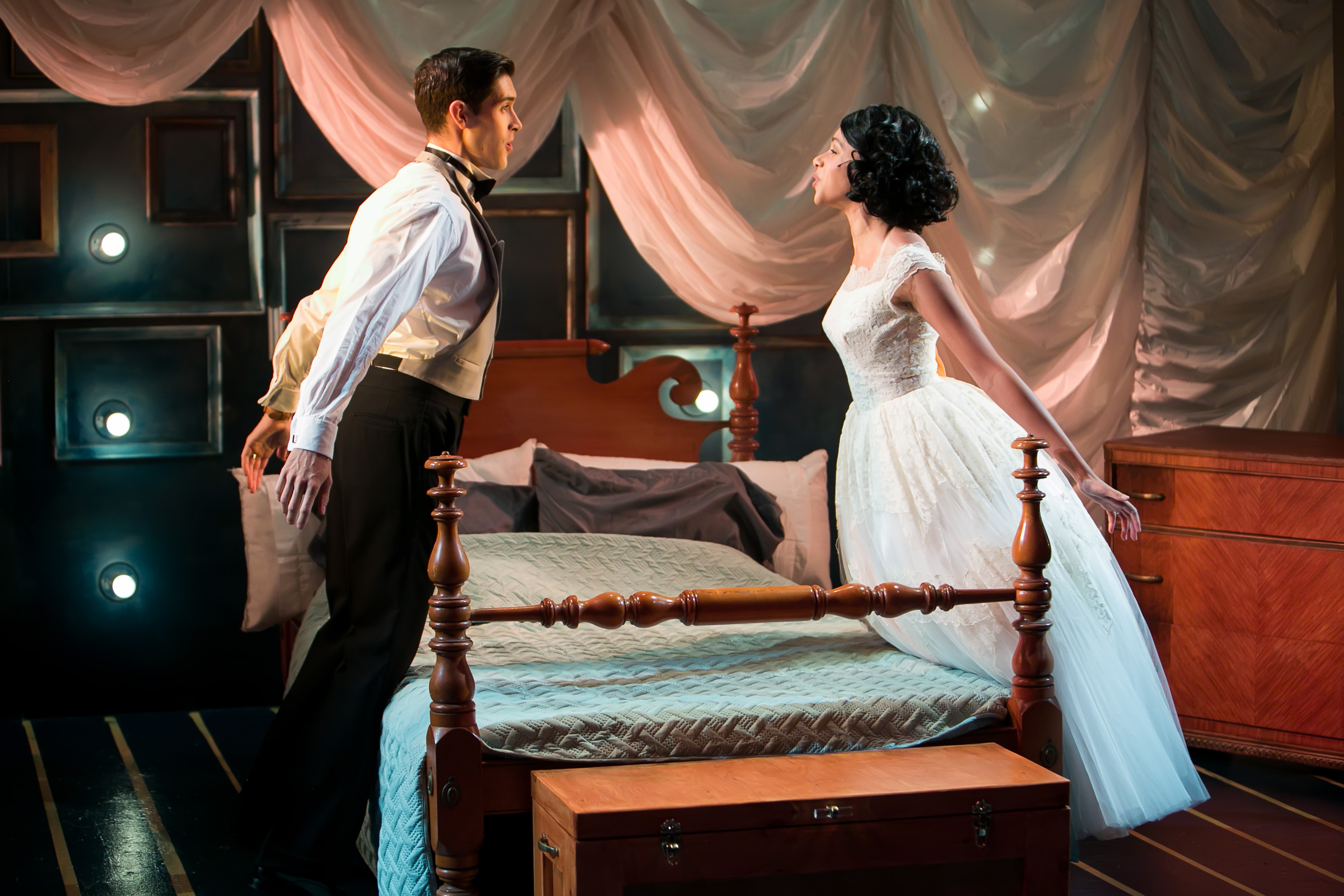 The Tom Jones-Harvey Schmidt musical comedy I Do! I Do! was long a staple of area dinner theaters, and came close to wearing out its welcome, much like its older sibling, the oft-produced Jones-Schmidt hit The Fantasticks. But when we encounter the show again after a long absence, such as the welcome Redhouse Arts Center revival running through Dec. 17, we can see its longevity is based on something substantial. There is more to it than mere winsomeness.

I Do! opened in 1966, a year after The Beatles packed Shea Stadium. The Jones-Schmidt musical idiom is a later chapter in the Great American Songbook that began with Jerome Kern about 1913. There is not a hint of jazz or urban rhythms. They also love to play with styles from before 1966, like the soft shoe of the 1920s. 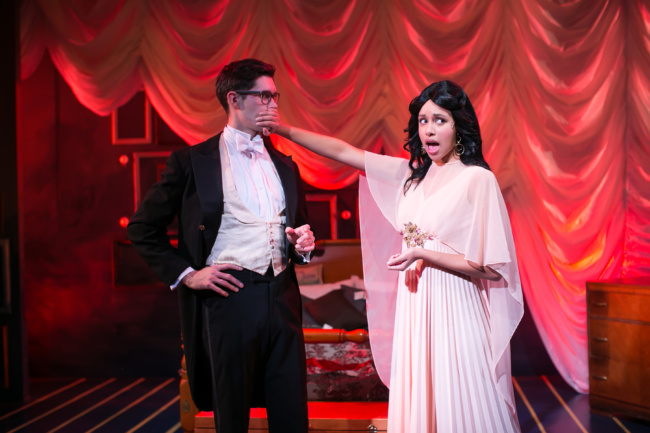 Counterintuitively, this music has aged better than the early rock’n’roll that displaced it, which is why Grease is played as a comedy. Even though the narrative span of I Do! spans a half-century, every musical number takes place in the present.

The musical is based on Jan de Hartog’s 1951 Tony Award-winning play The Fourposter. It was widely produced, filmed in 1952, and never neglected. In stretching the span of the marriage from the play’s 35 years to 50, Jones and Schmidt recognized that the premise allows for a wide variety of tones, from the naïve embrace of love through bitter conflict and acceptance, presenting two characters with ever-changing emotional colors. (In de Hartog’s original conception, the couple get married in the 1890s, which would better explain their unfamiliarity with how babies are made on their wedding night.)

Director Temar Underwood has cast two young out-of-town professionals for this long, lyrical journey. Lanky Luke Hamilton brings a ready wit and the body of a Tommy Tune-ish dancer to the role of husband Michael, a pop novelist who sounds like a male Danielle Steel who aspires to be compared with Tolstoy. Soprano Caroline Strang, seen last year in the Redhouse’s Beauty and the Beast, keeps her mischievousness under a serene façade as Agnes, a stay-at-home mom who sings of emotions ahead of her time.

Having players who appear to be in their 20s reverses the thinking from the original production. Back in 1966 Robert Preston and Mary Martin, both past their prime, sang the roles of Michael and Agnes. The youngsters tip the center of the action toward the beginning of the first act, which celebrates young love with numbers like “Together Forever,” ”I Love My Wife,” and especially “My Cup Runneth Over,” the best-known song of the show, and a standout for Hamilton.

Choreographer Stephfond Brunson introduces some vigorous dance numbers, following the examples of Gower Champion in the original, including a soft shoe in bare feet. For Michael’s boastful number, “It’s a Well-Known Fact,” Hamilton takes up a top hat and cane and jumps up on the bed. These are young people’s performances. But by the end of the second act, they can mime an arthritic body set, even with their gym-flattened tummies and toned muscles.

From pregnancy to child-bearing and -raising, 50 years do not pass without tension. Agnes favors their son, whom Michael often finds wanting. Michael favors their daughter but rants that she is marrying an idiot at the time of her marriage. Agnes complains that she dislikes boring literary parties where she feels out of place, and Michael corrects her grammar. She tells him his fiction is mediocre, and — whoosh! — he admits to an affair with a younger woman.

Although the musical assignments are equitable, Agnes gets some of the stronger numbers as the action grows. Among them is the show-stopping “Flaming Agnes,” where she responds to Michael’s infidelity as an opening to her liberation, fantasizing about the wild life of an exuberant divorcee.

Even more affecting is her “What Is a Woman,” a preview of the feminist angst not yet on the horizon when the show opened. Agnes and Michael reconciled after his cheating, but with the children grown and gone, she feels superfluous and unwanted. Only an author’s wife, what accomplishments were her own? Ready to announce that she is fleeing the nest herself, Michael responds with the love of the opening scenes, renewed at the end of the cycle.

Of the dozen or so I Do! productions mounted locally over the years, this Redhouse version is by far the richest and best realized. Aside from Strang and Hamilton being peerless young pros, every physical aspect of what’s on stage is the best, starting with Camille Charara’s costumes and Tim Brown’s set, where the four-poster bed is backed by empty picture frames and includes a white, draping scrim. And lighting designer Marie Yokoyama’s black-on-white images of the passing scene includes head shots of Elvis and style excesses of the 1970s. Indeed, this I Do! I Do! transcends time.