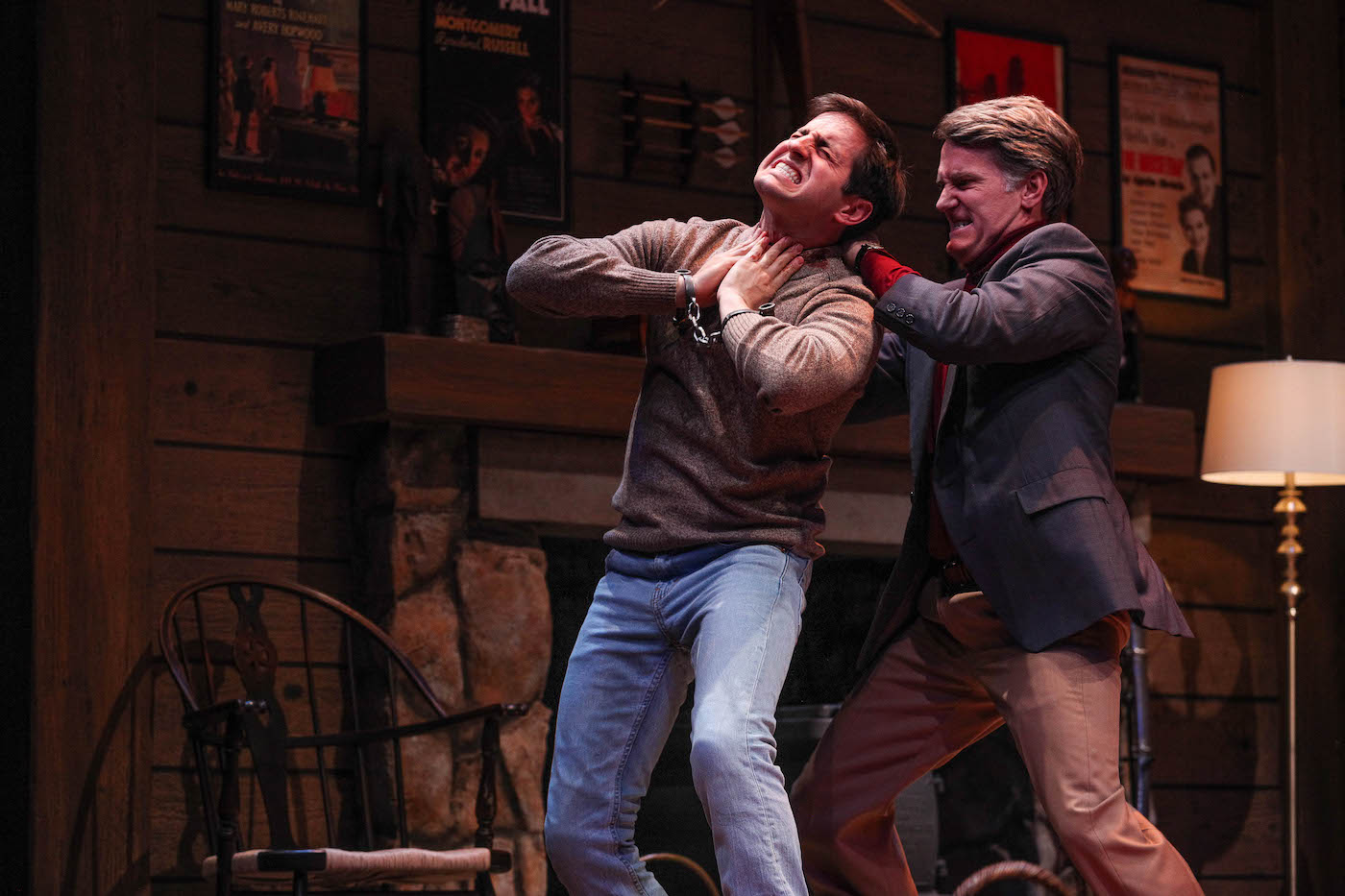 Looks can be deceiving: The blue-eyed and slender build of 34-year-old Alec Barbour may not be red flags for intimidation. Yet this fight choreographer, whose work is on display through Sunday, May 28, during Syracuse Stage’s production of Deathtrap, has a very particular set of skills.

The Nottingham High School and Le Moyne College alumus has returned home after living in New York City. Barbour has stepped in for fight choreographer Felix Ivanov, who is recovering from an injury, and has recently choreographed sequences for Syracuse University Drama Department’s Kiss Me Kate and Syracuse Stage’s Disgraced.

“I’ve haven’t had the opportunity to work with him yet. It’s a stinkin’ shame,” Barbour said of Ivanov. “I’ve heard some incredible stories from people that he’s amazing.”

Barbour will next take his skills to Rochester’s WallByrd Theatre Company, where he has already started working with the actors for William Shakespeare’s Macbeth. There is an apocalyptic setting with characters fighting with machetes. Mad Mac, he said, is the unofficial title the crew is using.

Barbour is also a theater development professor at Utica College, where he wrote and choreographed a Dracula-inspired play. He will also be interning and assisting this summer at a national stage combat workshop, a program he previously attended to gain more education and experience. And area theater buffs will note that Alec is indeed the son of Michael Barbour, a theater professor at Le Moyne College.

You grew up and went to school in Syracuse. You left and got sucked back.

I moved to New York City a couple years after college and lived in the Bronx for four years. I met my wife, Megan, here, but we lived together in New York. While in grad school at Wayne State in Detroit, I was working on a production in Chicago for three months. Megan was working at the Redhouse, so we were subletting our apartment. When I was done with the show, I really didn’t have a place to live.

I applied to cover his (Ivanov’s) classes, but didn’t get the job. Syracuse learned that I was a choreographer and asked me to participate in Kiss Me Kate. With Kiss Me Kate they had figured out some of the stuff regarding slaps and punches. They had one kid who could do flips, so they wanted me to figure out a way to get a couple moves in there. I also had to teach another kid how to crack a whip. It’s one of those weird skills. It’s not part of what I do, but a lot of people in this field know how to do it. A lot of people are into whip-cracking. It falls into the category of “circus arts.”

How did you get into directing fight scenes?

I fenced a little bit in high school and took up karate in college. I also have taken Wing Chun, a form of Kung Fu.

I went to the national stage combat workshop right after graduating college. It was a three-week program. There were some amazing teachers at the Society of American Fight Directors. It’s a tiered structure. The fight master is the title for these teachers. They choreograph for film, Broadway and at various prestigious theaters. Richard Ryan is one of them; he’s the fight coordinator for The Dark Knight, Sherlock Holmes, Troy and the television show Vikings.

When in New York, I’d piecemeal the classes. Many of the instructors would hold a sword-and-shield class or some other combat class for a given amount of time and for a certain cost. What I’m trying to do is become a certified teacher in stage combat. When I study, train and complete the class, I get that accreditation stating I know how to use this weapon.

Fight masters would come in at the end of the training to adjudicate the course. You train, you fight and at the end of it you perform a fight in the context of the scene. The master then gives notes and determines whether or not you pass.

Did you ever partake in live-action role playing?

I’ve never done the LARP thing, but don’t get me wrong: I’m an enormous nerd. Growing up, I was the kid playing with sticks or swords in the backyard. There is a line in the play I Hate Hamlet, which is uttered by the ghost of John Barrymore to the main character (Andrew Rally). “This is why one acts, because one is allowed to do this sort of thing!” To use a nerd metaphor, Barrymore is like the other character’s Obi Wan and goads Rally into a swordfight in order to get him out of his shell.

What makes a good fight scene?

The short answer is good storytelling. The slightly longer answer is that combat consists of three things: fight martial logic, acting and magic tricks. The fight has to have a reason and make sense. That’s where you get great martial arts fights. It also can be kind of dry, especially if it’s just a series of moves.

The magic trick aspect comes into play, because you’re not actually going to stab or punch your partner. It’s simulating that punch to the face or contact so that the audience sees the action. I may be hitting my hand, which is in front of my partner’s face, or I actually make contact.

There are basic principles. When we see something moving in front of something else, we tend to think they hit each other, especially when there is a reaction. From a distance, a person’s depth perception really isn’t great. It’s similar to how we process film, being that there is a series of still images. Our brains are designed to extrapolate incomplete info, so we feed it the information we want. By doing so, our minds are convinced that, yes, he really hit that guy. Timing and placement are everything.

The best stories for my money have dramatic structure. There is a beginning, a middle and an end. A really good stage fight is its own three-act play. You can follow a hero’s journey in one swordfight. No matter how short a fight sequence is, there is always that three-part structure.

Talk about the different styles of fighting.

There are about eight styles. The first is unarmed combat, which is very broad and ranges from Three Stooges to martial arts to domestic violence scenes. Second is rapier and dagger, which can be seen in Hamlet, Romeo and Juliet or The Three Musketeers. Then there is longsword or broadsword, which is Shakespeare’s histories, Game of Thrones and others of that genre.

Next is sword and shield, which is the same as the previous category, but with a slightly shorter sword. Quarterstaff, a six-foot-long stick, pertains to medieval or martial arts influences. Single sword is like swashbuckling, pirates and Zorro. The small sword, which is basically a needle with a handle, is a personal favorite, is historically specific. It’s a beautiful weapon and has very intricate point work to go along with it. George Washington owned a small sword, so we’re looking at late 1600s to late 1700s. Knives are the last, and this pertains to kitchen knives or special ops.

Do you design storyboards when figuring out fight sequences?

I don’t. I’ll usually wait, but I’ll walk in with some idea of the overall structure of the fight. Choreography depends so much on the actors, their abilities and the costumes they are wearing. If an actor getting a punch slaps his overcoat, the sound isn’t going to resonate because of the three layers of cloth. The best choreography comes out of the bodies of the people doing it. It’s organic to those actors.

Never make any assumptions on what anybody can do until you talk to and work with them. Plus, you have to be mindful of the actors themselves. Some may bruise more easily than others.

Someone joked, and I think this is a Richard Ryan quote, that the fight director’s real job is to come up with an answer to a question from the actual director in the time it takes to stand up from your seat, walk up to the stage and walk up to the actors. (Laughs.)

Plus, after a while of training and coaching, I have built up a great repertoire of scenarios and actions. What I think is the most fun is when you pull something from one scene and apply it to a completely different situation.

In Deathtrap, I pulled a concept I used in a performance of Romeo and Juliet, when Romeo is swordfighting with Paris. The placement of the sequence was a little different, so it had to be changed. I don’t want to obviously steal from myself. No one wants to do the fight sequence multiple times.

How many times do you have to practice?

It depends on the sequence. The fights in Deathtrap, once we figured out how they were going to work, weren’t terribly difficult for the actors to execute. They act through the sequences rather than having to worry about specific hand placement for a punch to read. One character gets hit with a log that’s made up of a big pool noodle. Although it’s a soft material, you still can’t hit someone in the face with it; you have to aim for big muscle groups.

In Disgraced, we had an actor beating the snot out of his character’s wife. That’s much trickier and tactical. The punches have to land at the right angles. Syracuse Stage’s Archbold Theater is really unforgiving in terms of sight lines. Throwing a punch in that theater is a nightmare.

For theater performances, a fight coordinator is working with a wider audience compared to film. The moves of the characters are broader. If I’m executing a punch, someone else would have to be executing the sound, whether they’re hitting their chest or clapping their hands. However, this has to be done in a way the audience can’t notice.

With film, the only audience the scene has to look good for is the camera. In film, the sound can be dubbed in afterward. Film has a slightly higher standard to fighting. They also slow things down, so the scenes have to move faster.