To honor the golden anniversary of the Everson Museum of Art, the venue is currently offering its own unique perspective with a celebratory exhibit.

Art Within Art: Everson at 50 works with a wide-open portfolio: primary documents related to the museum’s founding, artworks from its collection, TV footage from 1968, a slew of clippings from magazines and newspapers. There’s also audio in the form of an interview with I.M. Pei, the architect who designed the Everson’s building.

This array of archival material and various media is the backbone for a complex show that plays three roles. It revisits the building of the Everson, Pei’s first museum commission. It looks back to 1968 when the museum opened, a year when Martin Luther King and Robert Kennedy were assassinated and there were massive demonstrations against the Vietnam War.

And the exhibition looks at the museum as part of downtown Syracuse, part of a city that’s changed drastically over the last 50 years. Beyond that, it initiates a larger discussion about urban communities.

As might be expected, the exhibition offers an in-depth look at the process that led up to the opening of the Everson. There are copies of foundational documents, including Helen Everson’s bequest allocating $1 million for construction of a museum, the 1965 contract signed by I.M. Pei, and the construction plans. A mood of celebration is communicated by photographer Simpson Kalisher’s images of opening night at the museum as well as the response from national media. Ada Louise Huxtable, then the architectural critic for The New York Times, lavishly praised Pei’s design.

At the same time, Art Within Art doesn’t neglect the Everson’s collection. On display are Beverly Pepper’s large, stainless steel sculpture, Guiseppi Macri’s small piece, “Homeric Figure,” and “Rooftops,” a painting by Beatrice Wose-Smith that depicts a long-ago urban scene in Syracuse. Those artworks are complemented by two installations that Elliott Katz created specifically for the current show. 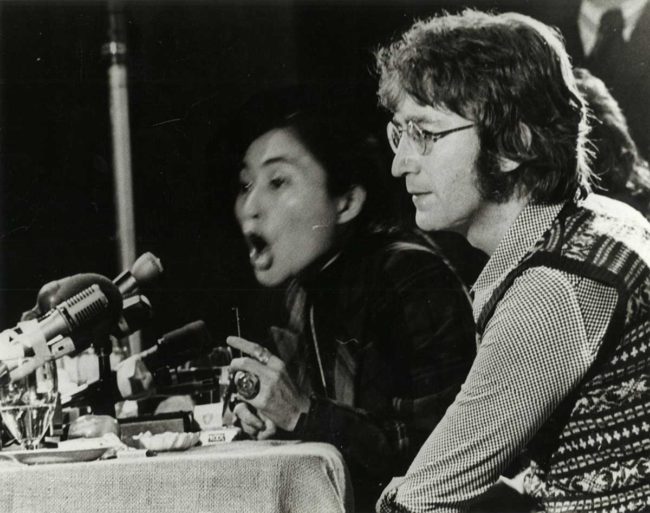 The October 1971 press conference with Yoko Ono and John Lennon for the exhibit “This Is Not Here” (Bob Lorenz photo).

The exhibition recalls 1968 through various means. A tabletop is filled with hardware from five decades ago including a phone, clock and other items. An old-style TV plays footage selected from 1968 broadcasts: coverage of the assassinations of King and Kennedy and the Democratic convention in Chicago; Muhammad Ali’s interview on William F. Buckley’s Firing Line, then a syndicated public affairs program.

In addition, the show looks at the Everson’s construction from an urban-planning perspective. Two controversies roiled the planning process. First, city officials considered building a cultural plaza in Thornden Park, near the Syracuse University campus; that proposal was heavily criticized and ultimately rejected. Then the focus returned to a downtown site, and the Everson was built at the corner of South State and Harrison streets.

That construction, as well as other projects like the building of Hutchings Psychiatric Center and Presidential Plaza, devastated the 15th Ward, a predominantly African-American neighborhood. Thousands of residents were displaced, and dozens of houses were demolished. A slew of small businesses had to relocate; some simply closed.

Art Within Art explores that time by screening The 15th Ward and Beyond, a documentary produced by Courtney Rile and Michael Barletta of Daylight Blue Media. In one sequence, Don Caldwell, Clarence “Junie” Dunham and other elders who grew up in the ward take a bus ride through the old neighborhood and discuss life before and after urban renewal.

The video has both historical import and relevance to the discussion of Syracuse’s future that’s taking place today, and that’s an essential element of the overall exhibit. “The show looks back and looks forward,” said D.J. Hellerman, the curator for Art Within Art. “There’s a similarity between conversations about Syracuse in the 1960s and conversations happening today.”

Clearly, the exhibit is self-reflective as it tells the story of the Everson Museum’s early years and considers the continuing impact of Pei’s innovative design. Yet its scope is broad rather than narrow. It also asks questions not easily answered: What is the role of a museum or other cultural institution in a city? How do we rethink American cities?

Finally, Hellerman notes that the show, at its core, links culture and place.

When she became executive director of the Everson Museum four years ago, Elizabeth Dunbar offered a straight-up mission statement on exhibitions: access the Everson’s collection whenever possible. Her very first show, Three Graces, soon demonstrated her commitment to that mission. It featured works by three artists, Carrie Moyer, Tony Feher and Polly Applebaum, all of which interpreted the collection.

This was one just one approach to utilizing artworks within the collection. The Everson also hosted Angela Fraleigh’s one-woman exhibit Between Tongue And Teeth, a series of paintings casting women as protagonists, not bit players. In that instance, a few pieces from the collection complemented Fraleigh’s works.

Then during summer 2018, Visions of America relied heavily on the collection, assembling paintings, photos and other pieces for an in-depth look at American life over 100 years. In addition, yet another 2018 exhibition, The Very Mirror of Life: Ceramics at the Everson 1968-2018, was selected from a permanent collection renowned for its ceramics holdings. It displays work by artists such as Adelaide Alsop Robineau, Nancy Jurs and David MacDonald. 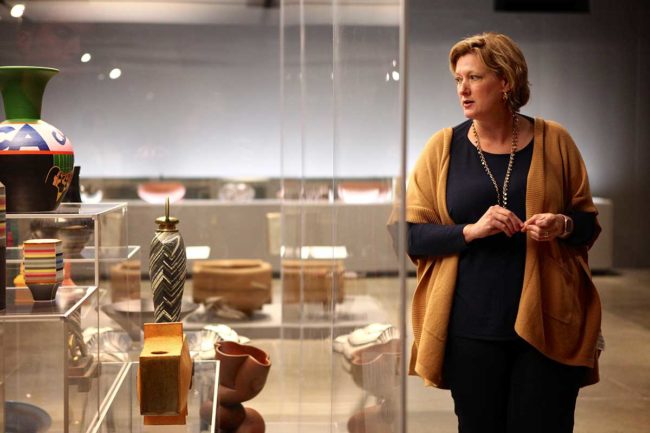 Shows like these certainly spoke to the collection but didn’t dominate the Everson’s exhibit schedule. Dunbar and the museum’s curator, D.J. Hellerman, oversee roughly 25 shows a year, covering a lot of ground. For example, retrospectives devoted to Bradley Walker Tomlin and Jeff Donaldson appeared at the Everson. Tomlin was part of the New York City school of abstract expressionists, while Donaldson was celebrated for his large, vivid paintings and participation in the Black Arts movement of the 1960s and 1970s.

In addition, the Everson showcased work by Vanessa German, whose mixed-media, stand-up sculptures are made from tar, plaster, and found objects. More than 20 of her pieces, called protectors or power figures, were displayed in the Sculpture Court. Another solo show, Darryl Hughto: From Diamonds to Sailboats, helped kick off the Everson’s 50th anniversary celebration.

And the museum moved down two paths with its community-exhibition space set aside for artists from Central New York. On one hand, exhibits like On My Own Time and Unique, which features work created by artists living with disabilities, are hung on an annual basis. On the other, there’s an openness to other types of shows: to work by tattoo artists or by those taking part in Re (Generation): Women Artists After 60, which opened Dec. 15.

Beyond that, other changes have taken place at the Everson during Dunbar’s tenure. The museum’s ceramics gallery was completely revamped, with a new floor, layout and lighting. Moreover, the director wanted more attention paid to acquisition of new ceramic works. “We were acquiring new work but doing it piecemeal,” the director said. “We didn’t have a staff member dedicated to that task.”

That situation changed last summer when Grant Johnson was hired as ceramics curator. He’s responsible for assessing the museum’s many ceramics pieces, for organizing exhibitions that will travel to other institutions, and much more. He’s the first curator of ceramics in more than a dozen years.

In a different but important realm, there have been various improvements in the museum’s physical structure, including new bathrooms, a new auditorium, and repairs to the building’s exterior. Plans were finalized for a new café; that project is slated for completion early in 2019. 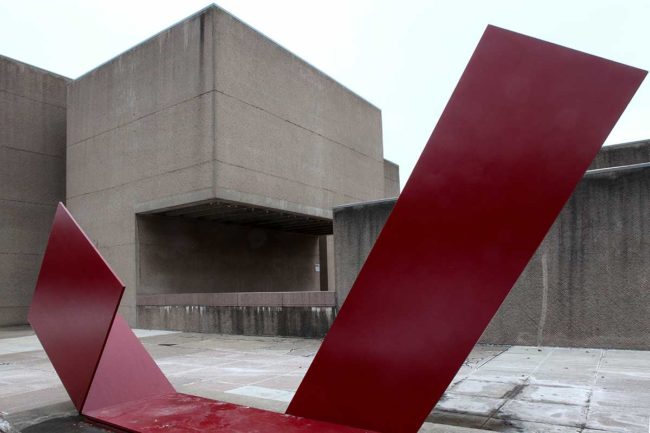 Outside the Everson during a typical upstate overcast December. (Michael Davis/Syracuse New Times)

Another goal for Dunbar from the very beginning was enhancing community engagement. Simply put, that means getting more people to come to the museum throughout the week, not just for receptions or lectures.

So the Everson has initiated activities ranging from family days to Friday events in the plaza combining music and food trucks, from yoga classes to art classes for children and adults. It also partners with Bruce Block on a monthly urban market, which provides a summertime venue for artists and crafters to sell their creations.

During fall 2017, the museum premiered its Everson Teen Arts Council, which brings in students from city, suburban and rural high schools for a weekly program. They learn team building, leadership and other skills. Among other things, they received instruction on how to mount an exhibit.

“The students were involved with all the tasks connected to putting up a show,” Dunbar said. “That included selecting the pieces, hanging them, and writing the captions.”

The council is worthwhile in itself and part of a larger but vital project: attracting more young people to museums. Throughout the country, the demographic for museum goers is trending older and older. That’s a concern for Dunbar or any other museum director.

“There’s a changing dynamic,” she said. “We are trying to appeal to a population raised on screens, trying to engage with an audience interested in experiences.”