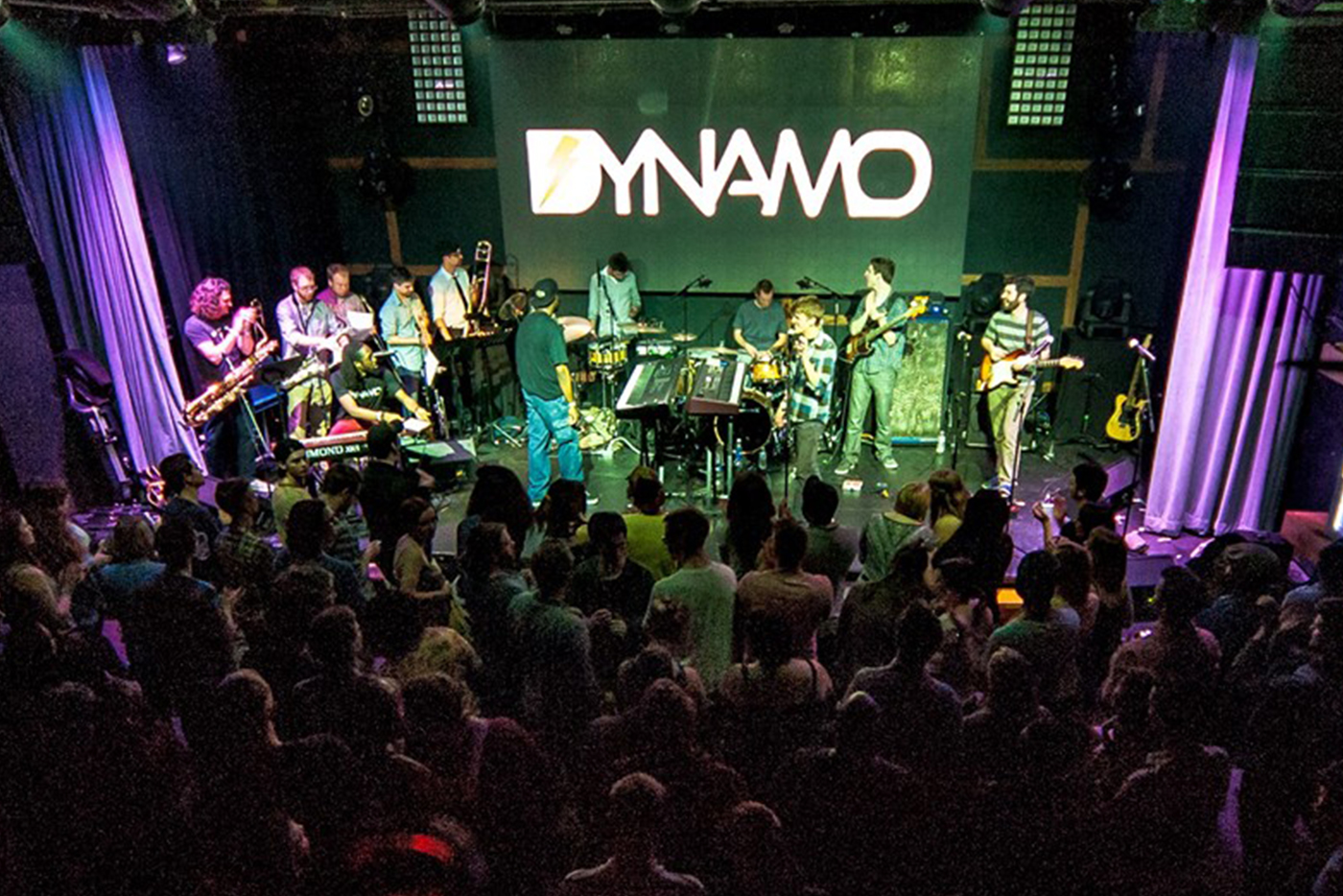 For local fans of the Nashville-based Dynamo, news of their next studio project is a dream come true. They’ll be recording live with audience members at SubCat Studios on Sept. 14, 15 and 16. However, the more interesting story is why Syracuse? And why live?

Keyboardist and founding member Ryan Connors moved to Nashville to get his master’s degree in piano at Belmont University, after studying classical percussion as an undergrad at West Chester University. “Oddly enough, I stumbled upon piano when I got to Nashville,” he recalls. “I did my first semester on drum set, then switched to piano in the second semester. I never took lessons until grad school and they kind of didn’t know if I was serious. But they made me audition and they thought I was good enough to study piano.”

Dynamo started forming in 2012 with several of Connors’ classmates. The band’s first album, Live at Ocean Way, recorded in December 2013 and released in March 2014, was actually Connors’ master’s thesis project.

Connors, a Snarky Puppy fan, had sat in the audience for one of their live-recorded albums while he was a student. The experience prompted him to ask Snarky Puppy about the pros and cons of recording live.

“I talked to those guys and researched the benefits,” he explains, “and my master’s thesis was a collection of that research as well as actually doing it. I wanted something to fulfill my degree requirement that would also benefit me in the real world.”

The album was a prime learning experience. The paid attendance at the shows offset the cost of recording. And the ears in the room helped give a sense of purpose that helped push the musicians to their best. But bodies in a room are hard for recording, especially for engineers. And one musician’s best take could easily be another’s worst.

“When I brought the idea to the engineer (at Ocean Way Studio), he was like, ‘There’s no fucking way you can pull that off,’” Connors remembers. “He said, ‘You are paying for the studio and you can do whatever you want. I don’t care if you fly kites in there, but recording live with an audience is the worst idea I’ve ever heard.’ I think engineers assume musicians don’t know anything about audio.”

The group proved that engineer wrong. They released another live album, Find Your Way, in late 2014, and their next album, Celina, is the latest attempt to capture the magic.

So, why Syracuse? Although Connors is from New Jersey, the band does have some Central New York ties. Nate Felty, on drums and percussion, is from Syracuse, and guitarist J.J. Murphy hails from Hamilton. But it’s taken more than that for them to record outside of Nashville for the first time.

“We chose Syracuse because every time we play here, there’s a bigger and bigger audience,” Connors says. “It’s a super-cool feeling when people know the words, when people wear the shirts. We’re a new band and you don’t usually see those results. I thought since they like us so much, we should give them the treat of being part of our next album. Syracuse is a place where we feel at home.”

The album’s title, Celina, also ties into that mentality. “Celina is a city in Texas where our vocalist’s (Dain Ussery) parents live,” Connors says. “We learned a lot of the songs we’re going to record in that town. We would set up shop in their garage and learn tunes.

“But Celina is more of a metaphor for what I’d like this album to be. It’s thanking the people there, and in Philly and in Syracuse and in Cleveland, where friends and family have been super-helpful and believed in what we’re doing. I tie that into the reason we’re recording in Syracuse. We have friends and family who we want to be part of it.”

While in town, the band will invite students from surrounding schools, including Cortland High School, West Genesee High School and others, to visit them in the studio and ask questions. The Syracuse clinics are similar to the many they have presented across the country.

“When we first started out, clinics helped a lot,” Connors says. “When you first start, venues can’t pay you hundreds of dollars. So we raked in money from clinics to sustain us on the road. Once we were over that hump, we proved we could bring people out and that people liked us. Then we started talking about guarantees. I like finding creative ways around problems. And there’s something to be said for the music we’re playing and the people we’re playing with. When that’s all lined up, you can find a way.”

At SubCat, the band will spend one day setting up, another for rehearsals and three days for recording the eight songs going on the album. They’ll play three shows each of the recording days, giving them nine takes of each song to analyze and select for the final record.

“We’ll just be looking for the right take overall,” he says. “It’ll get hard. Someone will say, ‘I like my solo on this take’ and someone else will say, ‘I messed up on that take.’ People fight and then I say, ‘We’re taking this one.’ That’s how I approach it. Sometimes you can really hate something you play at first, then come back and like it. The whole thing is a learning experience. You end better than you were before.”

Dynamo’s live album recording sessions will take place at SubCat Studios, 219 S. West St., on Wednesday, Sept. 14, through Friday, Sept. 16, 3, 7 and 9 p.m. Tickets are $35 and available at dynamo-music.com. Reminder: Bring your own set of headphones.

“Don’t focus on all the reasons you can’t do something. Think about how to get beyond the problems. Finding out we could book clinics and make money while we got our feet on the ground touring-wise is an example. I’d hate to see someone say you can’t make money touring. There’s always a solution. Even within the clinics, I don’t encourage people to go into music. I just try to show them how exciting life can be when you find out what you want to do. For me, that’s music, but it could be anything. Computer programming. Teaching Spanish. Just find what floors you and you won’t have to worry about money. That will follow. When you can put your heart and soul into what you’re doing, that’s how you’ll be successful.”