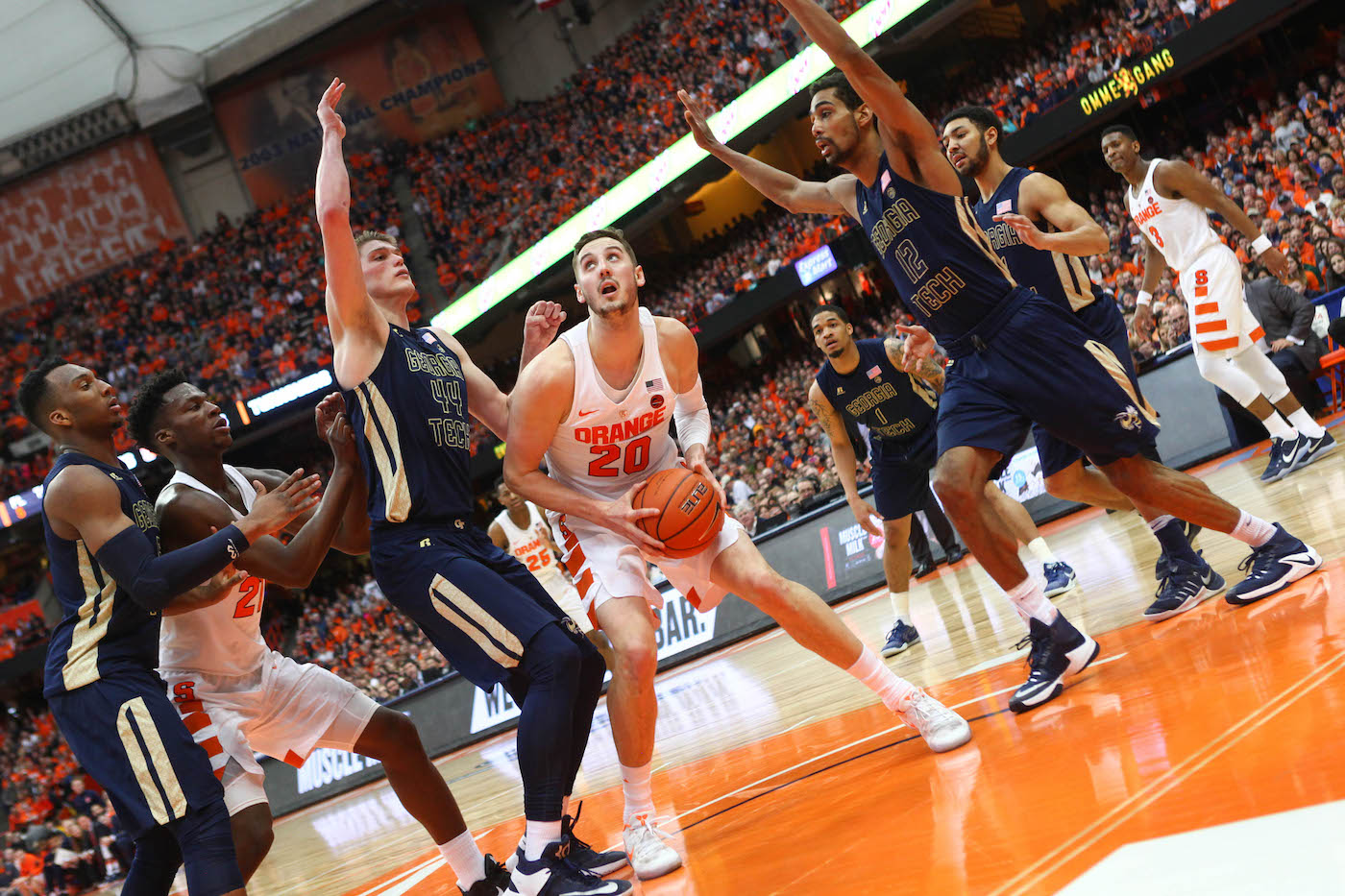 SU must overcome struggles away from home for postseason success.

As we ponder the Syracuse University men’s basketball team’s chances for a deep postseason run, let’s start with a few facts:

Fact No. 1: The Orange was 16-3 at the Carrier Dome this season and 2-10 on road or neutral courts. We’ll also point out that Syracuse is two buzzer-beaters away from an 0-12 road record: John Gillon’s game-tying 3-pointer at North Carolina State and Tyus Battle’s game-winning 3-pointer at Clemson. 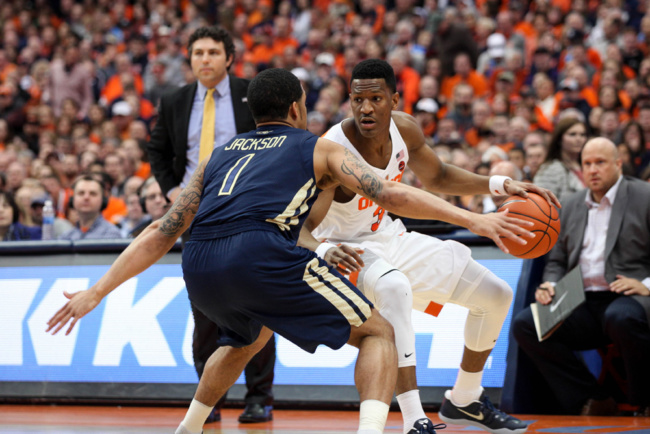 Now comes the tricky part where you’re dealing with people and not facts: How do you get a team that’s clearly capable of playing good defense to play good defense away from home in the most important games of the year?

Let’s hope Syracuse coach Jim Boeheim and his staff can find that answer this week as the Orange, seeded eighth, will face No. 9-seed Miami on Wednesday, March 8, noon, in the second round of the ACC Tournament at the Barclays Center in Brooklyn. If Syracuse wins, it will face regular-season champion and No. 1 seed North Carolina in the quarterfinals at noon on Thursday, March 9.

“What matters is your ending,” Syracuse fifth-year senior forward Andrew White said. “You’re always remembered for how you end and I think this team has the ability to do some really good things going forward to start the postseason if we focus on the right things.”

Publicly, at least, Boeheim dismisses Syracuse’s poor road record on the facts of life in the loaded ACC. Only three ACC teams — North Carolina, Notre Dame and Virginia — had a winning record on the road in league play, and they were all 5-4. Louisville was 4-5 and five teams, including Duke, were 3-6. The Orange is lumped in with the other six teams that were either 2-7, 1-8 or 0-9.

“It’s very hard in this league,” Boeheim said after the Orange thumped Georgia Tech 90-61 in the regular-season finale March 4 at the Dome. “It’s also very, very hard to get 10 wins in this league, and to beat three top-10 teams.”

Boeheim, of course, was making Syracuse’s case to receive a bid to the NCAA Tournament as the Orange finished 10-8 in the ACC and defeated three teams that were in the top 10 when Syracuse beat them: Florida State, Virginia and Duke.

But here’s something else to remember on Selection Sunday and why Wednesday’s game against Miami could be crucial: Road record is one of the nine criteria the NCAA Tournament Selection Committee uses when making its decisions, and it hasn’t put a team into the field with fewer than three wins away from its home court since 1993-1994. 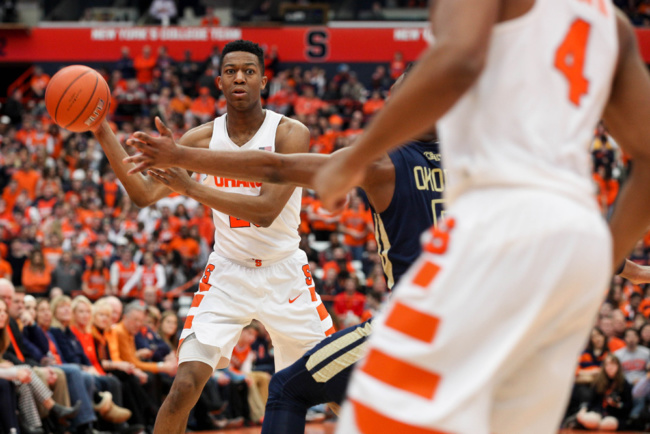 And CBS Sports’ bracket expert Jerry Palm said that a team with 14 losses has not made the tournament since 2011. So, a loss to Miami would be a double whammy in that it would be the Orange’s 14th loss and it would deny Syracuse a third win away from home.

All of which brings us back to our original point: What will it take for the Orange to play the same kind of defense against Miami that it did on Jan. 4 at the Dome, where Syracuse held the Hurricanes to 38.9 percent shooting in a 70-55 win?

“The main thing is our defense; it all starts on defense,” Battle, a freshman guard, said after the Georgia Tech game. “As you could see, when we got stops on defense it led to easy transition buckets, easy threes. When a team is turning the ball over like that, it kills their momentum. So when we’re moving in the zone, we’re really tough to beat.

“We beat Miami off our defense,” Battle added. “We’re a good offensive team; a lot of games we snuck the wins out because of our offense. But when our defense is good, as you saw tonight, it’s usually a big (win).”

So why can’t the defense be that good away from the Dome? Certainly, the Syracuse players feed off the large Dome crowds, and that’s the case for every home team, making it more difficult to win on the road. But the defensive principles don’t change, the court is the same size, and if you can move your feet and raise your hands at home, why not on the road?

“We know it’s win or go home, so we’re going to bring it,” Thompson said.

But is it as simple as turning a switch off and on? That’s what makes this postseason so intriguing, because anyone who has watched the Orange this season can see the team making a deep postseason run, or losing by 15 in the first ACC Tournament or NCAA Tournament game.

“We just have to try to force ourselves to have energy,” guard John Gillon said. “I think that’s it, that’s the only difference: the energy. Because the energy makes up for a lot of things, a lot of plays that we won’t make on the road. We make them here (at the Dome) because our energy is so much higher.”

When asked why they would just now start to bring that energy on the road, Gillon smiled and said, “It’s do or die, man. It’s time.”

Shocking News And Dictation Blues
Keeping the Tipp: Irish icon has all eyes smiling on Tipperary Hill
To Top