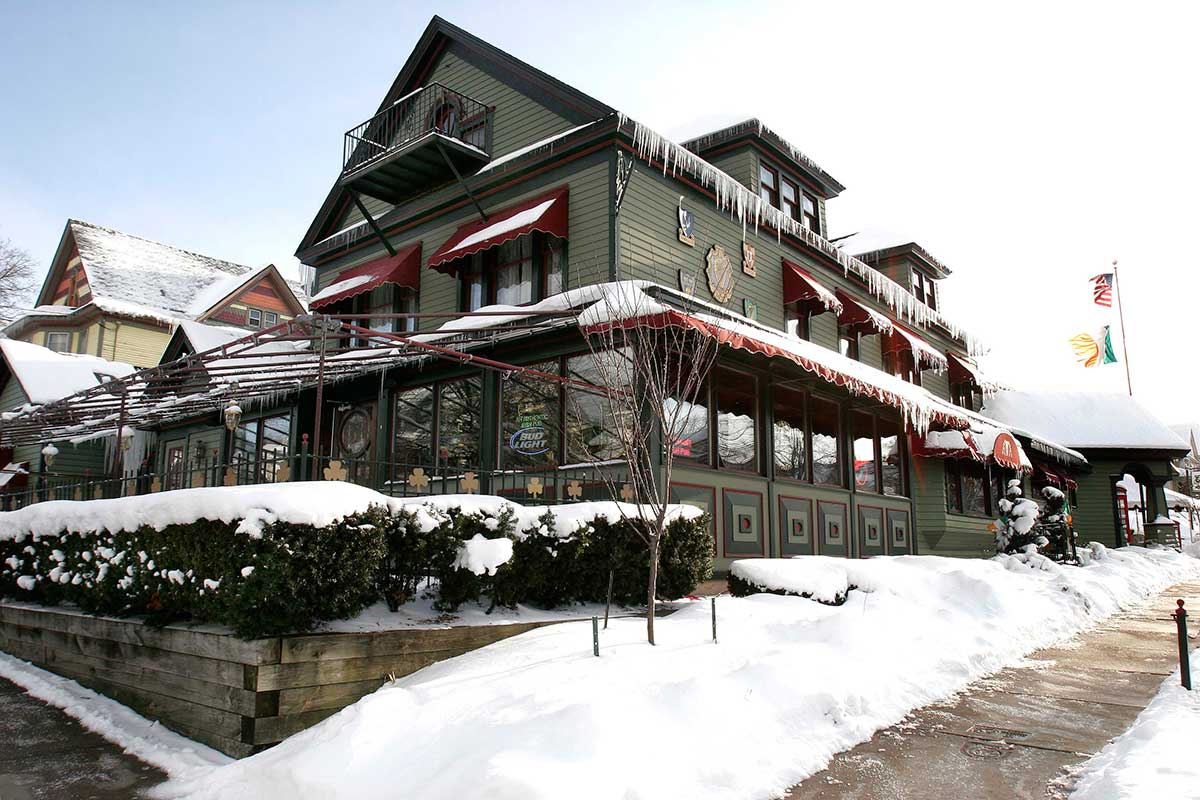 Keeping the Tipp: Irish icon has all eyes smiling on Tipperary Hill

Pub owner Peter Coleman has all the Irish eyes smiling on Tipperary Hill.

Peter Coleman just turned 80 and moved back to his old neighborhood, Tipperary Hill. He had been living in Westvale for 44 years but had never abandoned the home turf.

Sixty-two years ago he took over management of a little neighborhood bar at the corner of Tompkins Street and Lowell Avenue from his father, who had gotten sick. The son eventually created Coleman’s Authentic Irish Pub, a cultural institution for the Irish in Central New York.

“When I was 12 or 13, I used to come down and clean up the pub, but I never really planned on being a saloonkeeper,” Coleman recalled in a March 1986 Syracuse New Times interview. “I wanted to be a lineman for Niagara Mohawk, and worked about three months there. But when my father got sick, I had to come here. I had just turned 18. I was helping run Coleman’s at night. It was just a bar then, no restaurant. In 1956 he was out sick for a full year and then came back. He died in 1961, so I had five good years working with him here.”

As he moved back home in time for the annual Green Beer Parade, held Feb. 26 at Tipp Hill, those in attendance acknowledged that Peter Coleman was the institution. 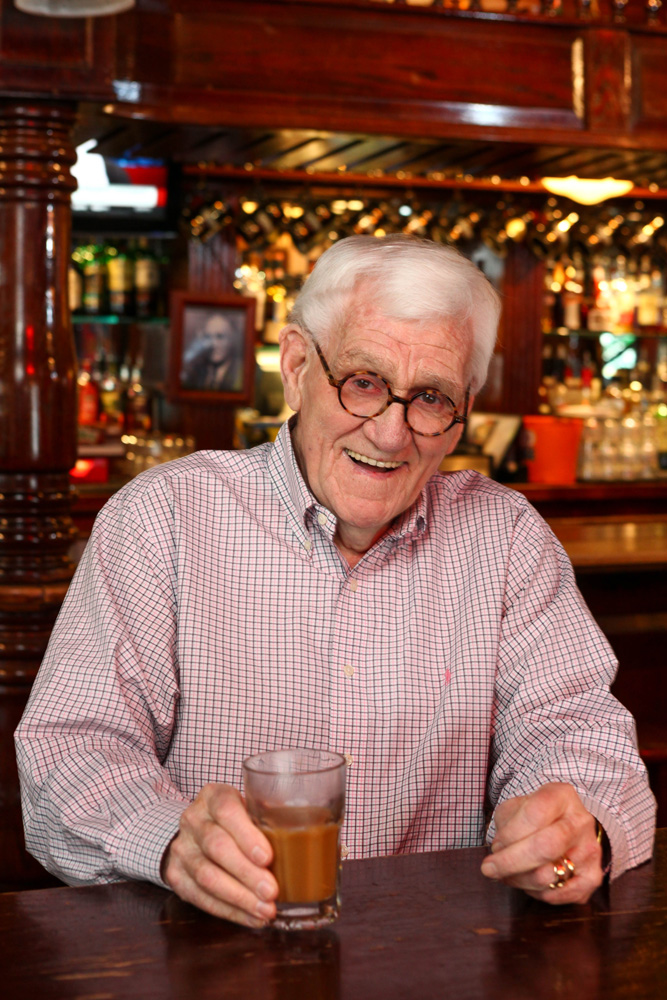 What is your secret of maintaining a long life?

In my case, I drank the first half of my life, and I sip the second half.

Back in the day, the city’s ethnic communities established annual celebration days with parades in their neighborhoods, like Columbus Day on the North Side. (The late WSYR-Channel 9 news reporter) Nancy Duffy brought the pressure for the downtown Irish parade downtown. What is her legacy?

I loved Nancy Duffy. When I first met Nancy she was suggesting a parade for St. Patrick’s Day. I told her to go up to the zoo and ask the director if we could borrow one of his elephants and paint his ass green for the march. And that’s how it started.

We had meetings here (at Coleman’s). We talked to all the hierarchy and decided the neighborhood was too small. It’s not quite as good as our Green Beer Parade (organized annually by Coleman for a block and a half on Lowell Avenue), but it’s worth it to be downtown.

What was it like growing up in the neighborhood?

Growing up as a youth, this neighborhood was unbelievable. You could sleep on your porch and not lock the door. Everybody knew each other. They sat on the front porches. I just bought a house here and the first thing I did was open up the porch. Hopefully, we’ll go back to those days.

I got out of St. Pat’s High School in 1955. My family lived all our lives on Bryant Avenue. I lived with my mother until I was 30, just like Christ did, then I got married. The younger generation, a lot of them got married younger than they do now, and moved out to the suburbs.

It’s a completely different kind of neighborhood. It’s been all right, but it’s not like it used to be growing up. That’s why I put so much attention into the neighborhood now. Back then, I’d leave my house on Bryant Avenue at 2:52, it would take me 45 minutes to come down here to work, which is only two blocks away. You’d talk to the Dwyer sisters, Mrs. McCabe, Mrs. Lynch. That’s the way it was back then.

I love this Hill, and it’s coming back. It’s been good to me. After I got married, I lived next door to here (Coleman’s), bought an old house and fixed it up. We had our first three children there when this was still a little pub. It was too tight, so we moved out to Westvale.

The kids are all grown up. My baby Dennis is third generation running this place. And he’s got three kids. He’s taking over my house in Westvale and I’m building a house one block down the street here. I’m right back here in the neighborhood where I started.

An intense Irish-Italian competition can be seen historically in city politics. When Joe Nicoletti beat Joe Fahey in a Democratic mayoral primary, the Irish stayed home for the general election, enabling Republican Roy Bernardi to capture two terms in City Hall. Were you ever drawn into the competition? Did they want you to run for mayor?

I never got involved in politics. Never. They asked me to run for mayor once. Are you kiddin’ me? Run for mayor when I’m running an Irish pub? That just doesn’t make any sense. This is fun. I don’t think politics and mayor is much fun.

We have both (Republicans and Democrats) coming in here. You’re a Republican, a Democrat, whatever you are, this is an Irish pub, anything goes.

Did international Irish politics, such as the Irish Republican Army campaigns in Northern Ireland, dominate conversation at the pub?

We never really ever felt any of that here. Thank God!

What is distinctively cultural for the Irish folks in Tipperary Hill?

There’s an awful lot of young people who are getting into that Irish dancing. Other than that, I don’t know. That’s a pretty good question. Drinking is distinctively Irish cultural.

Is that stereotype or part of the culture?

A little bit of both. I think it’s stereotyped too much. Now it’s changing. When I was growing up in this neighborhood, drinking was different. Back then it was fashionable to do a little drinking to excess; you got away with it. Everybody drank, it seemed like, and smoked. Now it’s changed. You have to be careful how you drink and you try not to smoke. All that stuff is changing. Thank God!

What do you want that is not here?

I’ve always been fighting for that feeling. Talking about the old folks dying out and the young folks moving away, we want families. We want the young folks with children. You’ve got parks, the zoo. This is really an unclaimed jewel. Everything is right here. You can still walk around the neighborhood and it’s safe. I’m trying to get these antique lights coming up the street. If you light up a neighborhood, it’s a little bit of safety.

You want to create that comfortable feeling. I don’t know if you can captivate it again, but I’m gonna try like hell as long as I can. Moving back here, I think, sends a message.