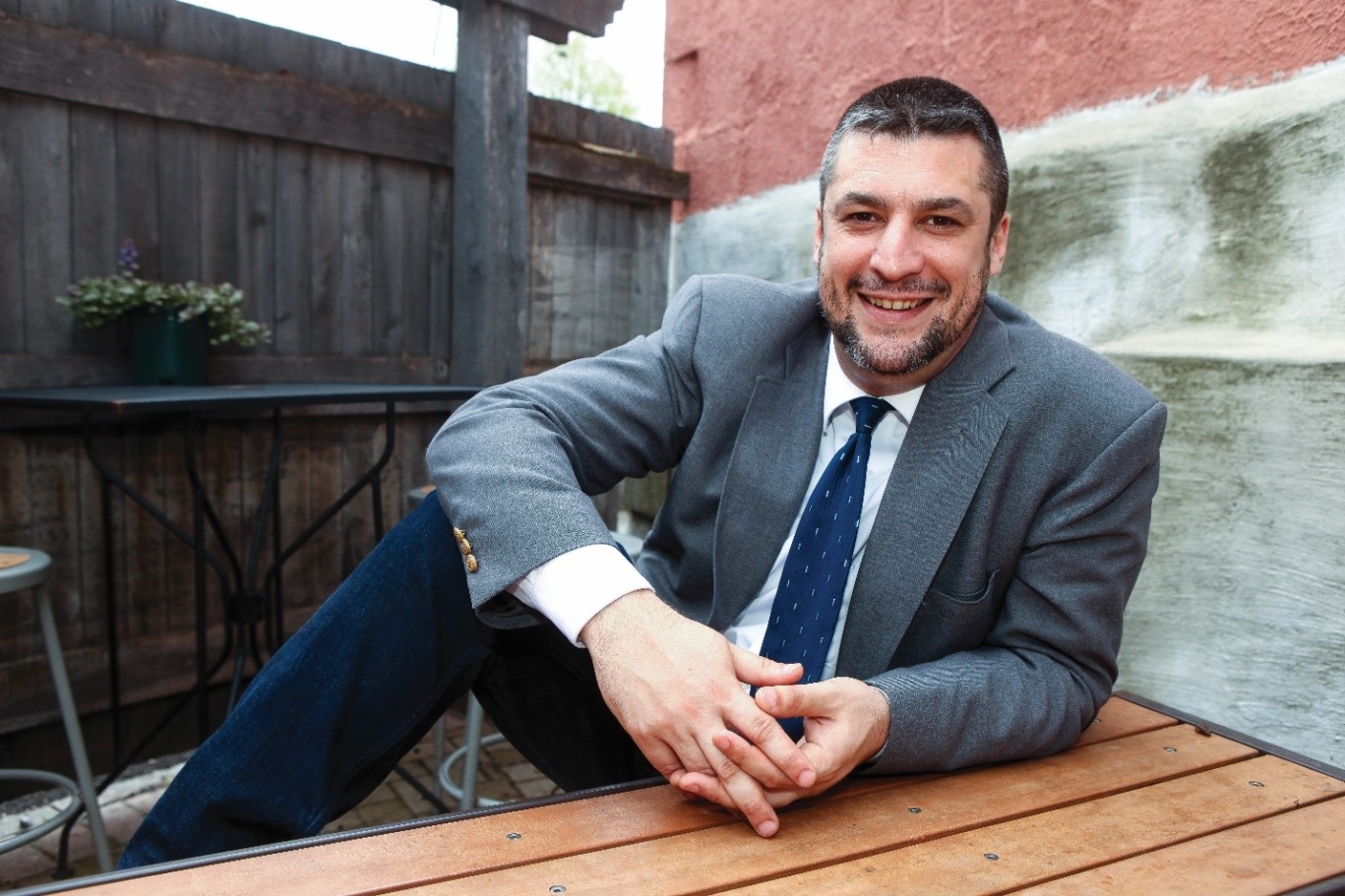 “After I got out of high school,” he recalls, “I went to New York City for a few years trying as a singer-songwriter. I moved to England in 2004. I lived in Europe for about 11 years, the last five or six working with the West African performer Sekou Kouyate. We did this kind of New York-Africa fusion project.”

The hip-hop/activist released a handful of CDs and did extensive touring in Europe during the 2000s. Yet Driscoll’s involvement in the 2016 presidential campaign for Vermont Sen. Bernie Sanders led him to consider running for an open seat on the Common Council in 2017.

He also fondly remembers his father, Neil Driscoll, who covered the Lee Alexander mayoral administration as a columnist for the Syracuse Herald-Journal and served under Mayor Tom Young as director of intergovernmental affairs.

“People would stop him all the time to get his ear,” recalls Driscoll, 39. “I loved it. He was a public servant and to this day — he passed away last year — I still get people coming up to me all the time telling me, ‘Your dad gave me some great advice at a crucial point in my life,’ or ‘He provided me with some resources.’ The last few years of his life I got to appreciate that more and more, and my decision to get involved in politics as well.”

What got you into music?

On the East Side I was too small to play ball. In high school, I was 5-foot-5. I wasn’t a real athlete and ever since I was a small child I’ve been drawn to music. I learned it was a way to transcend barriers with people, so I fell in love with it.

Actually, the first guitar I had was because my grandfather had collected some kind of offer from the back of a Campbell’s Soup can. My mom bought me my first Washburn guitar for my birthday. My seventh-grade teacher at Levy Junior High, Joyce Suslovic, she was awesome. She pushed me up on stage a lot. First was “No Woman, No Cry” at a Levy talent show.

Where did you get your sense of community?

Again, I think through music. I really loved it at Nottingham (High School). It was great because I was into all kinds of music. I could sit with the kids who loved Wu-Tang Clan and I could sit with the kids who loved Rage Against the Machine and Nirvana. Those were the groups I could go from the rock kids to the heavy rock kids all around. That was a real tour for me to build a sense of community at Nottingham High School. Throughout my career path, that was what really fostered it. I always prided myself on not just sitting at one lunch table at school. I’ve been that way throughout my life, kind of finding different ways to relate to different people.

Why did you run for the Common Council? Is it that kind of lifestyle?

I’m sure none of my friends expected me to wear suits most days. That’s a big change of pace. It was really the Bernie Sanders presidential campaign that drew me in. Obviously, my father had been in office. When I was on tour as a musician I used to read a lot of books about politics in America. I read a lot of Noam Chomsky and Jane Meyer. I never expected to run for office, but when I got back here and I got really engaged with the Bernie Sanders campaign I kind of saw how the sausage was made and I thought, “Yeah, why not me?”

Are you going to run for mayor when Ben Walsh is done?

I don’t know. At the moment I feel like Ben’s doing a great job thus far. So I have no plans to run for mayor at the moment. But Nader Maroun (Driscoll’s predecessor on the Common Council) was termed out. He’d done his eight years. So if there’s a higher position that comes available that I would be a fit for, yeah. If I prove to be a good public servant and people like me and I can do it at a higher level and direct more resources to more problems in the region, then I’d be open to that. But I’m definitely trying to focus on the here and now.

Part of the here and now is 35 percent, the total turnout of city voters for the last mayor’s race. Does that mean we’re giving up on the system?

Giving up on voting and the process? Pretty close. Thirty-five percent is not a good number. Everywhere we look we see signs of massive dysfunction in government. That’s a big reason I got involved. Things are obviously broken, and I wanted to try to take care of this little piece of garden and see if I’m any good at that.

What should the city’s relationship be with the state and what is the carryover from former Mayor Stephanie Miner’s conflict with Gov. Andrew Cuomo?

There’s definitely still some residual in the breakdown in communications. I wouldn’t really care to comment on whose fault it is or place blame, but there’s definitely still a lot of dysfunction here locally as well. We’re in the honeymoon period with the new Common Council, with Walsh. So it’s hard to comment on what the new culture is going to be. We’ll know that probably a year or two down the road. But it seems like Walsh is much less likely to rush into confrontation — try to avoid confrontation as much as possible. Myself as well. I wouldn’t run from it, but I wouldn’t run toward it, as far as confrontation goes.

Mayor Walsh was quoted in these pages, saying, “Development and opportunity are about relationships. That means having really difficult discussions that people aren’t comfortable with, including discussions about race and discrimination, discussions that we, as a community, have not been willing to have often enough.” Can we have these discussions?

Absolutely. I commend the Walsh administration for trying. But I think your point earlier — we have 35 percent voter turnout. We also have at community meetings, which I go to probably three nights a week, very low turnout. Most of them are older folks. No people 30 and under attending. The Walsh administration has been trying to initiate conversations around the new police chief and what that culture should be like. They’re trying to have that conversation. I commend the administration for trying to do the public outreach. But something’s got to change. We need more engagement from the community and people trying to reach out. But the myth that American government is broken is a challenge for all of us.

Syracuse ranks among the poorest cities in the country for communities of color. Is there any way we can raise our status?

We didn’t get here overnight. We’re not going to reverse it overnight. One big thing for me is not only the community grid option, taking down Route 81, but how do we redevelop that when we take it down. I’ve seen how it goes back to redlining, back to the 1950s, when you look at the money that was lent out, home ownership was made inaccessible to people of color throughout this country, but particularly in this region. There were conscious decisions made by people in power, so now we have to have some decisions by people in power to reverse those trends. I hope there are things that can be done by his administration, by this Common Council to reverse the concentrated economic segregation, the racial segregation. I think the mayor has committed to an economy that works for everyone.

There was a time when there was an element of prosperity coming from local manufacturing. Human service folk say that is a large segment of the urban population, unemployed or underemployed, who could respond to training for that kind of work. Could it happen here?

Unless some things change at the federal level, I don’t think those kind of jobs are going to come back. But I do think there are some exciting programs going on now with the Syracuse City School District for careers from technical education. But we also have jobs in this area which go unfilled because we don’t have the training. We’re currently in a bit of a negative spiral, but I do think we can revitalize the economic base, the job base here, but it’s going to take some creativity. It’s not looking to the models of the past, but identifying what are the models for the future.

After large fire, Herkimer Diamond Mines is ready for summer prospecting
Do you agree with Trump’s zero tolerance policy? (poll)
To Top