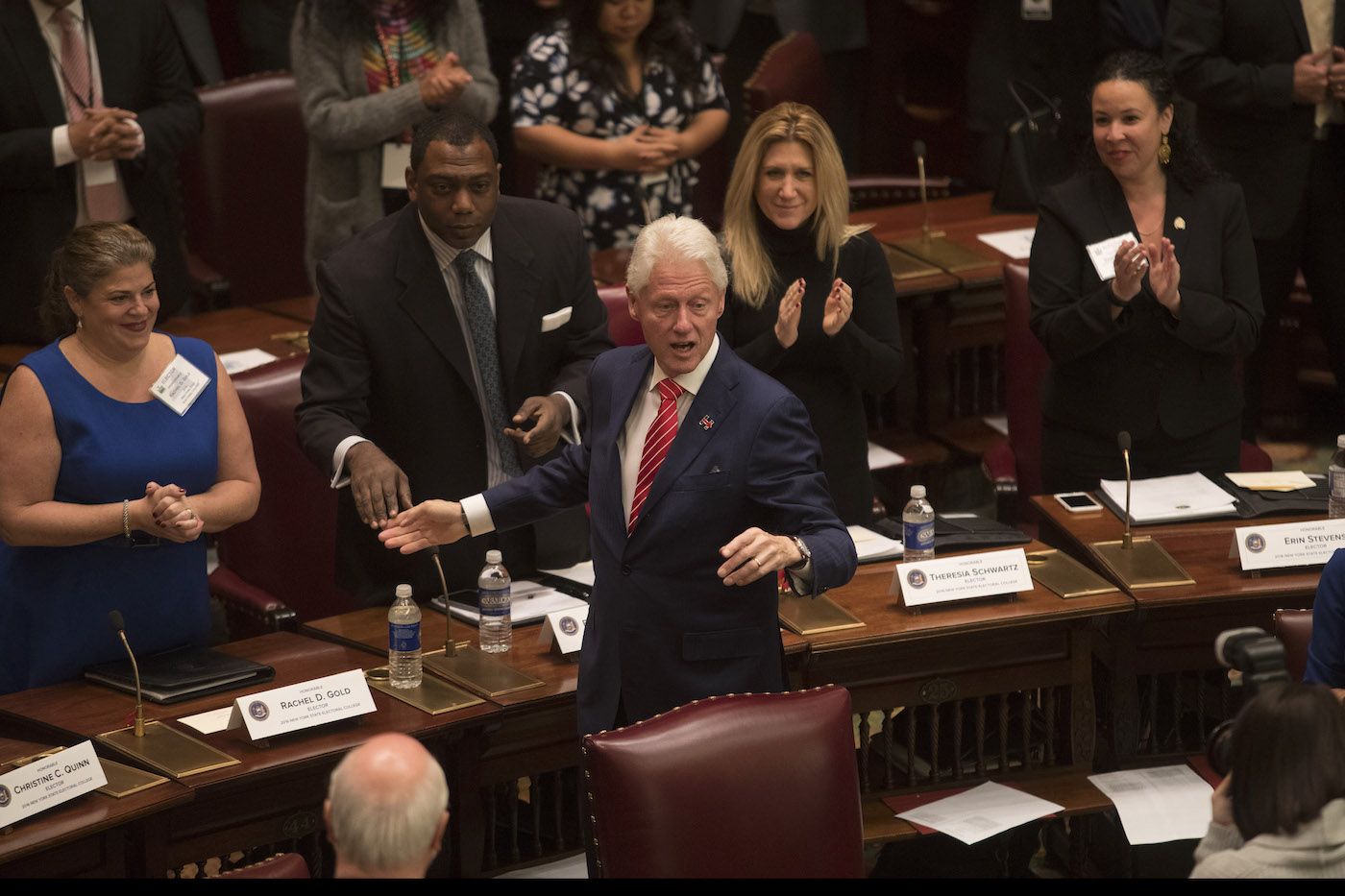 A month and a half after Election Day, the Democratic Party still fails to grasp the real reason the power carpet was swept out from under their feet.

The party has been spitting out a new reason almost every day to explain Hillary Clinton’s defeat — James Comey, Clinton’s emails, blank ballots, Bernie Sanders, the Electoral College, fake news memes and most recently, Russia, Russia, Russia. On Monday, when Bill Clinton cast his vote in Albany as one of New York’s Democratic electors, he said “at the end, we had the Russians and the FBI deal. But she couldn’t prevail against that.”

While it cannot be denied that each one of those factors absolutely played a significant role in the election’s outcome, it is ridiculous to continually claim that any one of those is the sole reason for Clinton’s undoing.

Let’s remember, it’s not just about the presidency. No party has ever lost more seats in Congress and in state legislatures than the Democrats have under Barack Obama’s term. Wisconsin GOP Sen. Ron Johnson’s re-election was even a surprise to him. Sen. Rob Portman of Ohio was considered to be one of the most endangered Republican senators, but throughout the fall, he pulled ahead in the polls and his opponent conceded minutes after polls closed. And in Virginia’s 10th congressional district, Republican Rep. Barbara Comstock won re-election by six points, even though Clinton won the district by 40,000 votes on the presidential level. Do you think James Comey and Vladimir Putin are the reasons why Republicans won those races?

So, what happened? Chuck Schumer predicted back in July that Democrats were entering an era of electoral dominance, saying “we’re going to have a Democratic generation.” Why didn’t that happen? Well, all we have to do is look at the map and the math. Clinton and many of her Democrats down-ballot have simply lost their way when it comes to connecting to the white working class of middle America.

After Ronald Reagan’s rise to power thanks to the “Reagan Democrats,” Bill Clinton again transformed the Democratic base by being the new champion of the working class, the “Bubba voters,” which secured the Midwest as safe Democratic territory for a quarter of a century.

President Obama triumphed just four years ago with the same message, painting Mitt Romney and Republicans as caterers to the wealthy. Now, the tide has turned again. With Donald Trump as the clear populist candidate, even as a billionaire himself, the Democrats couldn’t help but appear as the opposite. They are now often referred to by many as “the coastal elite.” They dominate urban areas across the country. They have an overwhelming amount of rich Hollywood nobles backing them. Clinton was painted as a Wall Street puppet, cozy with the donor class and hounded for getting hundreds of thousands of dollars in paid speeches. Not exactly the kind of person you’d think would resonate with a farmer in northern Michigan.

And it shows. In Iowa, a state Republicans had lost in five of the last six elections prior to 2016, 31 counties that voted for Obama switched to Trump. In Michigan the number was 12; Wisconsin, 22; and Minnesota, 19. Some of those counties swung by double-digit margins, and many had voted Democratic for decades.

And people in those counties had their reasons. They felt the party has sold them down the river. They felt they have left the Rust Belt to rust further by increasing business regulations, supporting job-killing trade deals, defending a health care program that crippled their finances, and in many ways, pushed them into a socioeconomically different 21st century a little faster than they’re comfortable with.

Those are the people that have felt left behind, ignored and even talked down to. Many of them voted for change in 2008 but eight years later, they still struggle to put food on the table, find and keep a well-paying job, and send a child to college. All the while a candidate comes into their town touting the “progress” the country has made, like when Obama said in a press conference last week that “the country is indisputably better off. Those folks who voted for the president-elect are better off than they were when I came into office for the most part.”

The election results would signify the opposite.

It’s that kind of ignorance that got the Democrats in trouble during this round. The same ignorance that brushed off Bernie Sanders as a viable candidate, who like Trump, was a populist figure and champion of working class whites. He was the one with large crowds. He was the one who overwhelmingly won rural counties in dominantly white states during the primaries — the same counties that voted for Trump in November. The fact that Clinton won only four states between New York and Nevada and outperformed Obama in Philadelphia but lost the state of Pennsylvania should alone be an obvious in-your-face omen that Democrats need to do some evaluating.

But the party doesn’t seem eager to bring in new faces or take dramatic steps in order to improve their relationship with that voting bloc. They again whisked in Nancy Pelosi to lead them in the House, a San Francisco establishment figure who has overseen the party’s obliteration in that chamber since 2010. They are waging a war against Keith Ellison for DNC chair — who is supported by, of all people, Bernie Sanders. And they are continuing down the road of politics as usual, thinking next time they just need to run a candidate who maybe isn’t under FBI investigation during the election and they’ll be fine.

What will it take for them to stop pointing fingers at Fox News, angry white men and young people who didn’t vote for Hillary Clinton before they start looking at themselves? If anything, something as drastic as the election of someone like Donald Trump should’ve done the trick.