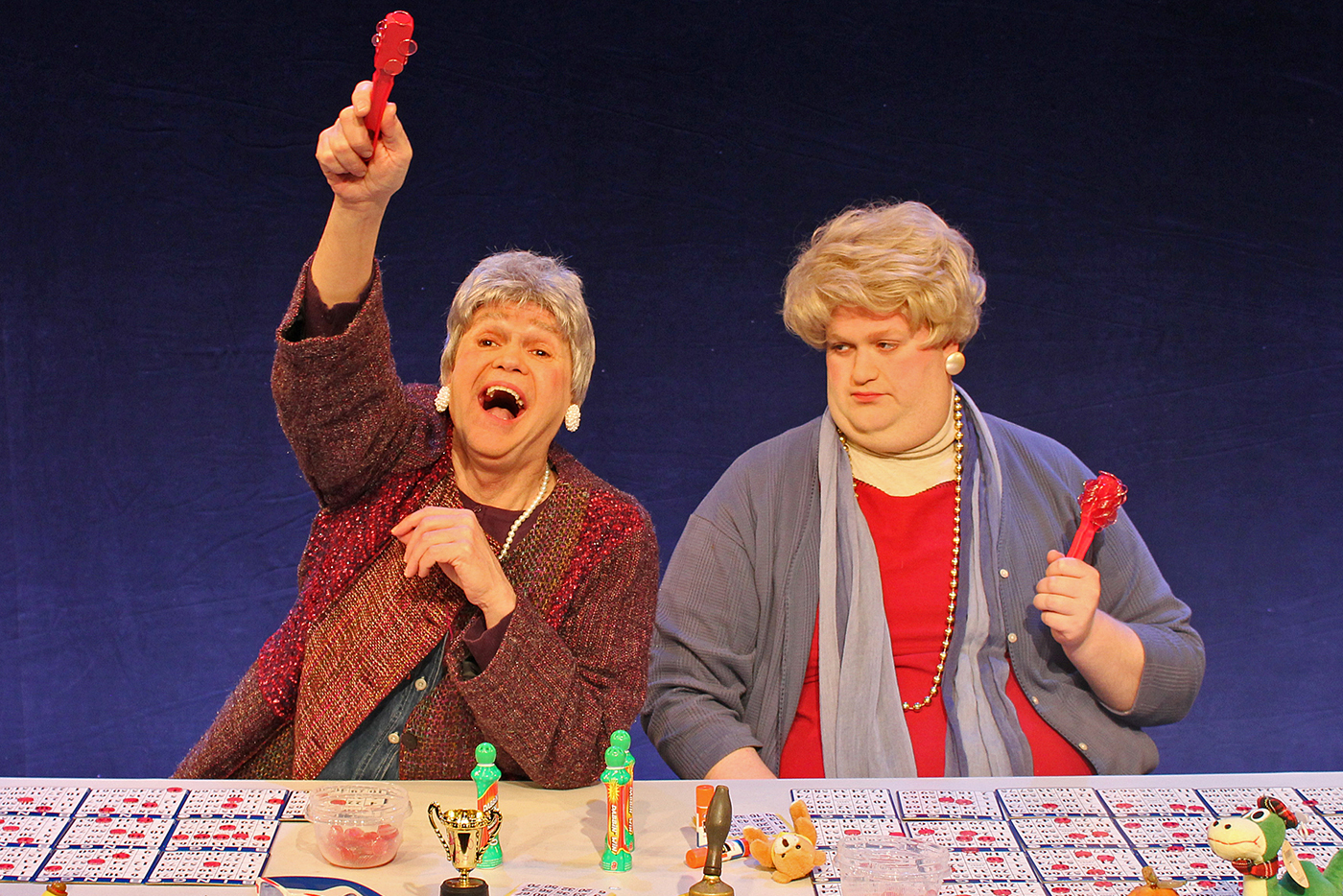 We’ve had colorblind casting for a generation, frequently with happy results. It means you don’t have to be a white guy to play a white guy, and so James Earl Jones can appear as a plangent King Lear.

So think of The Queen of Bingo, running through Sunday, April 9, at Cortland Repertory Theater Downtown, as an example of gender-blind casting. Veteran Cortland Rep director Bill Kincaid must have felt there was no need for an estrogen test when casting the roles of Chicago sisters Sis and Babe in this comedy written by Jeanne Michels and Phyllis Murphy. So he called on thin Chris Nickerson and hefty Jason Sofge to put on skirts, without any whiff of camp.

Unexpectedly, having two guys put on skirts to take out the bingo cards lightens the tone of this show. Queen opened in 1993 and has appeared on the Syracuse New Times beat on several occasions. Some earlier directors have emphasized the loneliness and needfulness of the sisters on the reliable premise that it takes inward pain to generate outward comedy. Instead, the tone here is celebratory.

Director Kincaid starts winding up the laughs by having the voluble Babe (Sofge), emerging from the audience, bark at an unseen interloper who has taken the preferred seat. This forces the sisters to play in the smelly hallway outside the boys’ locker room in a Chicago parochial school.

Celebratory means that Kincaid has removed all the satirical hooks Michels and Murphy might have written into the text. The interpretation welcomes audiences already favorably disposed to the board game. As the production is staged cabaret-style, with audience members seated four to a table, this means that in the last 20 minutes before the first act’s intermission, everyone gets a three-game sheet and a bowl of plastic wafers to cover the numbers as they are called. The object is not just to get five in a row but to cover the entire 25 squares.

Sis and Babe play bingo at St. Joseph’s School, somewhere in blue-collar Chicago. Eric Behnke’s set design might just as well have served for Nunsense, except for the piped-in organ music. Neither of the sisters is married, although Babe was about a decade ago. (She counts years on her fingers.) There is no tension between the sisters, but in the time-honored biology-is-destiny of comedy, corpulent Babe gets more than her share of the gags. Much of this is non-lethal aggression against safe targets, delivered in laser-sharp falsetto: “Play bingo with the Protestants at the Elks? They don’t know sin.”

Like professionals arriving for work, Sis and Babe come prepared with the right equipment, including daubers, magnetic chips and reliable good-luck charms. They break through the fourth wall to make eye contact with audience members, treating them like rival players. This almost becomes interactive theater, but no innocent is drafted to become a stooge. This allows the audience to see how competitive the sisters are, especially Babe. She makes cutting remarks about other players before or after she greets them with a smile and a nod.

As in the darker versions of Queen of Bingo, Sis and Babe are driven by a sense of emptiness in their lives. Both are weary of money woes and fear aging when retirement brings more blues than frivolous leisure. Where they differ is that Sis is sustained by the company and the process and does not care much about winning. Her startling revelation is that she has been playing every night, even at downmarket Mary Immaculate Church, and looks upon the spent money as payment against the gloom.

The humor turns darker and sharper in the second act when Babe reveals that her craving for victory flows from her diminished sense of self by the shame of her weight. What the script does here is to present Babe’s real pain while simultaneously mocking the whole rhetorical trope. She wails that she’d rather move to Hawaii and wear a muumuu all day than order a dress in size 18, just as the unseen Caller belts out, “I-18!”

While Sis and Babe deliver 90 percent of the lines, their work is complemented by the indifferent voice of Tim Mollen as the Caller. Clad in a black suit with Roman collar, Mollen also appears as smarmy Father Mac Muldoon, the Cork-accented cleric who assures us all is well.