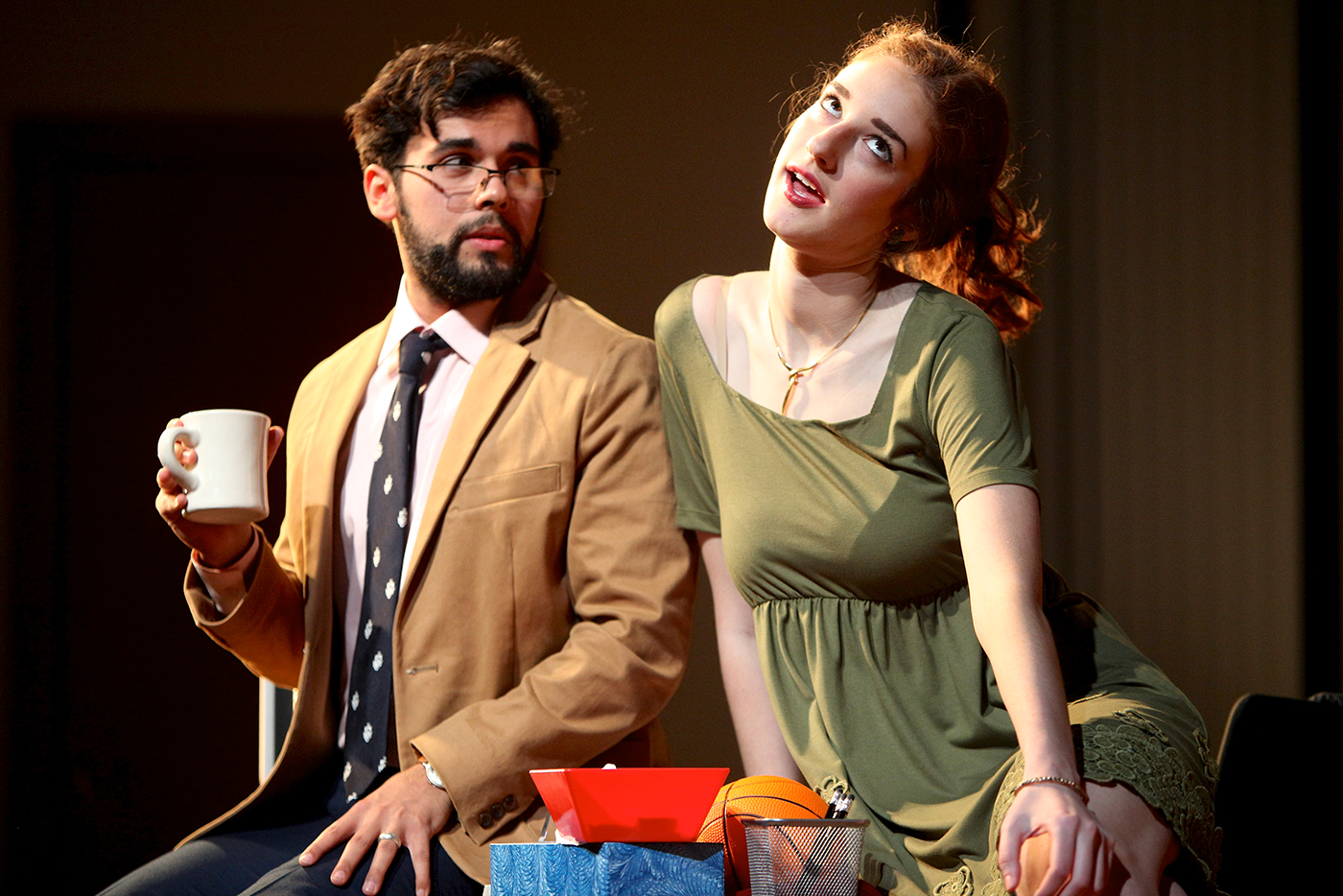 SU Drama’s “Laura and the Sea” is a dark suicide comedy.

At first we acted out stories from the Gospels, soon joined by the love stories of the troubadours. Later dramatic action was drawn from fables, folktales, tales of wonder and eventually history, and then on to novels, news stories and movies.

What we see for the first time in the Syracuse University Drama Department world premiere of Kate Tarker’s Laura and the Sea (through Sunday, Nov. 13) is the blog as the default raw material. When Laura, a top travel agent, unexpectedly kills herself, her colleagues piece together a memorial blog. As we all know now, bloggers speak in their own voices and usually focus on themselves. There is some question of how much of reality the blogger even perceives or can connect with.

Laura is billed only as “a new play,” rather than a world premiere, but it has been seen only in workshop before this production. New SU Drama instructor Katherine McGerr brings this “new play” in many senses to us. Playgoers steeped in Arthur Miller or even Sarah Ruhl are likely to find it disorienting.

Action switches between three simultaneously represented locales presented on Roslyn Palmer’s unchanging set. Pay attention to lighting and sound cues to see when we have moved on from the chic offices of J. Travel, somewhere in Manhattan. Next is a pleasure boat docked somewhere near Manhattan; we can tell when office manager Annie (Jesse O’Brien) hoists a huge sail. And third is the memorial blog itself, with characters speaking in their own voices and often projected in a lighted crawl up above.

Time moves fluidly back and forth. A character may speak of Laura’s loss, and shortly she will appear on stage speaking in her own voice. In cyberspace we lose that orientation to the actual world we inherited from our ancestors.

As with messages in blogs or tweets, the context of the internet becomes part of what is communicated. Credit not only Roslyn Palmer’s set, Greg Folsom’s lighting design and Kevin O’Connor’s sound design but also Rasean Davonte Johnson’s projection design (a new title for us) for helping the audience stay with the action. Because characters do not address each other by name, we could not be sure what to call them without seeing their utterances identified.

Director McGerr has conveniently cast the six players as distinct physical types. Audiences know who they are and what they’re like before we link persons with words. The CEO is a tall guy usually in a dark suit, Jack (Pascal Portney), whose power over his employees extends to sleight-of-hand magic. Brunet Annie (Jesse O’Brien) asserts her authority in lengthy speeches. There is some question how well people pay attention to her.

Jack and Annie are closed off in a glass-walled office upstage. At a flick of the wrist, blinds close into an opaque screen, and we can no longer see authority.

Downstage are four desks or work stations. Bearded, earthy Stan (Adam Coy) sits at stage right. He speaks candidly, as one would in a blog rather than conversation with another human, of his wish to see his co-worker Mary naked. Tall and red-haired, Mary (Adele Fish) remembers that the deceased Laura used to apply sunscreen to her bare back. Toward stage left, Joe (Dominic Martello), the shortest character, was unmistakably drawn to Laura. When an attempt is made to clear her desk, he retrieves her calendar from the waste basket.

In a play where every word and gesture can have meaning beyond itself, we can see that travel is a metaphor for experience. “Where would you go?” also means what would you do? Significantly, the employees of J. Travel never go anywhere and show no interest in doing so. They only know what they see online. In 2016 America, however, travel agents have been damaged by consumers finding their ways on sites like kayak.com and priceline.com. It’s like what Napster did to music stores but does not fit Tarker’s viewpoint.

Kevin O’Connor’s sound design makes an unusual contribution to the sense of disconnection in the office, with abundant white noise. Along with assorted bells and ringers, many unheeded, is the oppressive roar of air conditioning, drowning out other sounds and discouraging conversation.

Laura and the Sea is billed as a “black comedy,” but Tarker’s tone has little in common with such grim contemporary practitioners as Martin McDonagh or Tracy Letts. There’s often a lighter and frivolous humor one would not expect in a play that includes a suicide. But then again, disconnection is much of what Laura is about.

Playwright Kate Tarker has won a passel of fellowships and awards. She attended Oregon’s Reed College, where Steve Jobs learned calligraphy, has an M.F.A. from Yale, and now lives in Brooklyn.