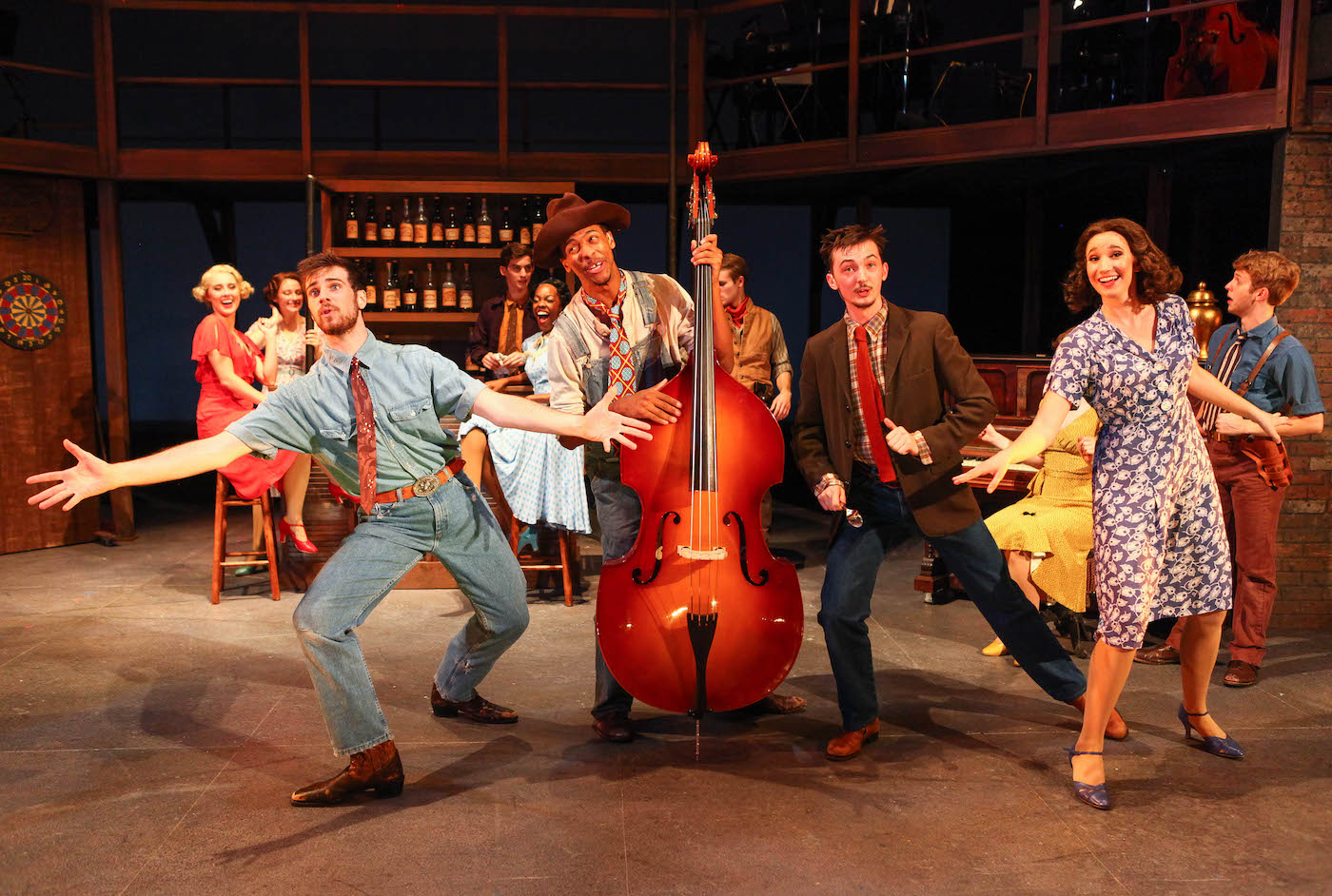 Many of the most affecting stage works are journeys, as we travel with characters to see where the road leads. In Horton Foote’s The Trip to Bountiful it’s a search for an ineffable past to fill a loss of self. More explosive is Ken Ludwig’s updating of the Gershwin brothers in Crazy for You: The destination is the Nevada burg of Deadrock, where we’re greeted by two six-person choruses of cowgirls and cowboys. Both journeys deliver rewards.

The unseen star of the Syracuse University Drama Department production of Crazy for You (through Sunday, Oct. 15) is director-choreographer Brian J. Marcum, the new kid on the block. Bearing extensive Broadway and national credits as a performer and director-choreographer, Marcum has recently become an assistant professor for SU Drama. Standards have never been higher, so if Marcum is going to knock our eyes out, his reach must extend beyond what we usually grasp. That’s what he does.

Crazy for You has been a bulletproof show since it first appeared in 1992. Ken Ludwig, a comic playwright with a taste for the 1930s (Lend Me a Tenor), started with George and Ira Gershwin’s 1930 hit Girl Crazy, rebuilt the plot and culled hits from other Gershwin shows. Every number is a hit, even if it’s not immediately familiar.

Susan Stroman won her first Tony Award for the choreography in the original show, yet Marcum adds steps and visual gags she did not attempt. Ludwig keeps the action set in 1930, but turns Crazy into both a tribute and a spoof. Is the snotty but gorgeous rich girl Irene a cliché? Ludwig’s script will eventually invert her.

Indulgent rich boy Bobby Child (Crawford Horton) just wants to dance, but his bossy mother (Leslie Noble) wants him to tend to business. So she sends him to Deadrock to foreclose on a bankrupt theater.

Upon arrival he is immediately rejected by the local beauty, Polly (Brooke Solan), but decides to rescue the theater by impersonating the Broadway producer Bela Zangler by putting on a wig, false mustache and beard. Amazingly, Deadrock is overflowing with performing talent, including dudes who can fake combat with blank-shooting guns and tumble like gymnasts. Even with such advantages, it takes two hours and 40 minutes for Bobby’s plans to negotiate all the reversals.

As popular as Crazy for You has been with audiences, many college companies have shied away from it because so much rides on the talents and energies of the leading man. Lanky junior Crawford Horton brings a kind of Tommy Tune persona to Bobby Child, whose arms and legs can swing like semaphores, and also offers the level of inexhaustable energy that few can maintain after age 25. He sings in 13 numbers, with solos in headliners like the title song and the second-act lament, “They Can’t Take That Away From Me.” His native wit and physical dexterity show off best in items like “Slap That Bass.”

Horton’s height presents at least one challenge to director Marcum, when Bobby has to face off with the real Bela Zenger (Matthew Steriti), whom he has been impersonating. It’s a comic shadow-box routine, borrowed from a Marx Brothers movie, and includes the number “What Causes That.” It works when the two hold off getting too close together.

Matching Horton’s height and abilities, both comic and musical, is versatile Brooke Solan as Polly. In the 1930 show there were two girls in Deadrock, demure Ginger Rogers and raucous Ethel Merman. So Solan’s Polly is both a fighter but also a tender lover, as in the show’s most affecting song, “But Not for Me.”

Elsewhere the quality of performance is testament to how selective the SU Drama program has become. Outstanding are Jack Fortin as the loudmouthed local Lank, and Myles Justise Hayward and Adriana Schaps as eccentric English travelers Eugene and Patricia Fodor. As Irene, flame-haired Zofia Weretka becomes the major scene-stealer by smashing expectations with “Naughty Baby.”

Music director Brian Cimmet, leading a 10-player orchestra on a platform above the action, honors those jewels from the Gershwin songbook, and also takes a role in a well-timed sight gag. Costume designer Kristin Isola works magic tricks to transform Polly from jeans to gown in one scene, and saves her razzmatazz for silver garments on the chorus in the finale.

Across town, Appleseed Productions returns after 18 months of silence to allow veteran player Becky Bottrill the best dramatic role of her career in Horton Foote’s The Trip to Bountiful, running through Oct. 21. Much admired for musical roles, like Always … Patsy Cline, Into the Woods and Funny Girl, Bottrill had to put on 20 years to play the role of widowed Carrie Watts. A white wig, geriatric makeup and a rayon dress give her the look, but Bottrill’s angst and pathos are what plumb the depths of character.

Director Tina Lee, who helmed the Syracuse New Times Syracuse Area Live Theater (SALT)-winning The Prisoner of Second Avenue on the same stage, is in top form. Newcomer Hannah L.R. Benedict gives smashing support as the daughter-in-law from hell who can inflict death in a thousand tiny cuts.

Goya, Picasso And More In A Dazzling SU Art Show
Keeping It Reel For 14th Flick Fest
To Top