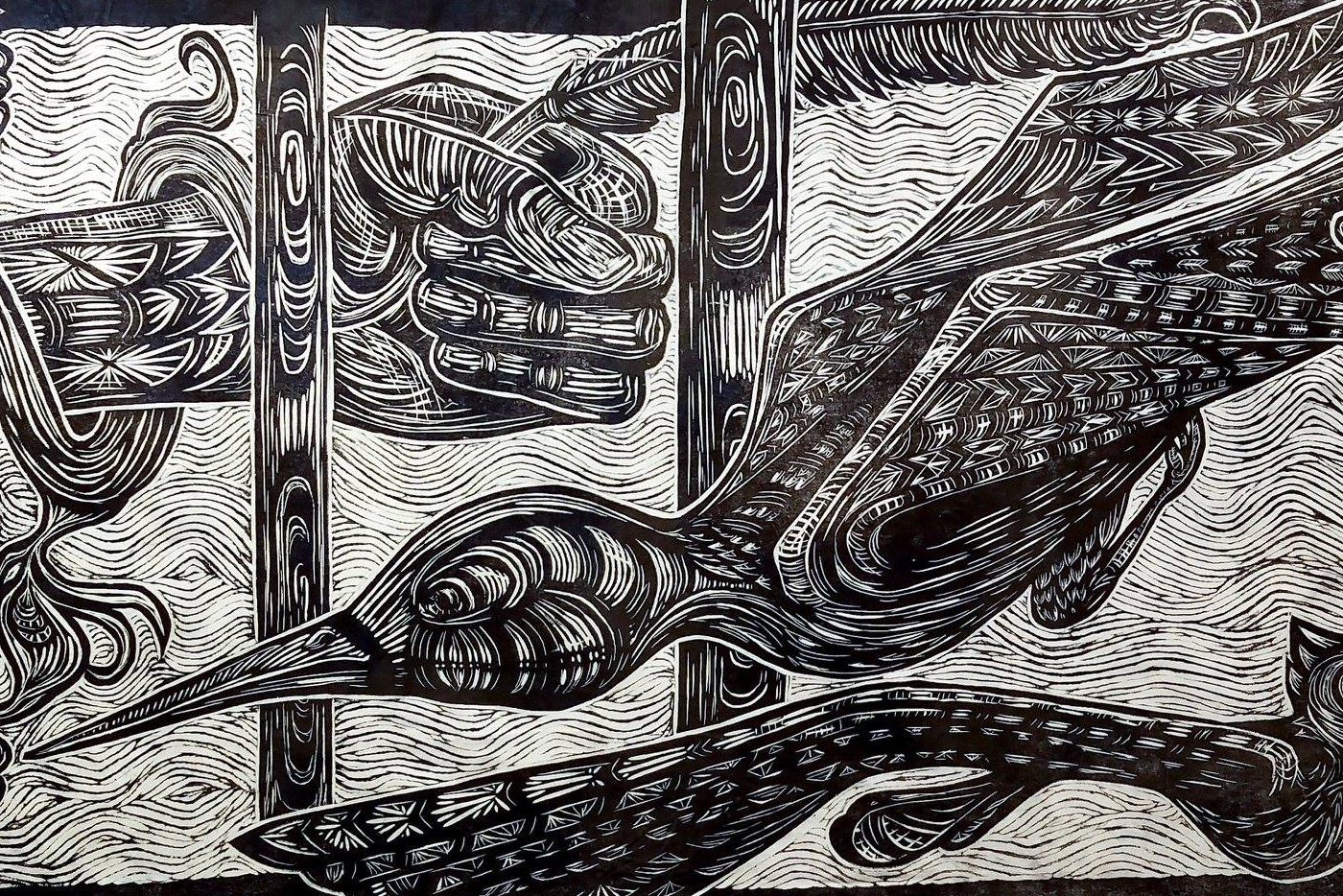 Immigrants turn life experience into art in “Carving Through Borders.”

Carving Through Borders, a series of woodblock prints on cloth, focuses on issues related to immigration and migration, criticizes policies regarding detention and deportation, questions the notion of borders. The exhibition at the ArtRage Gallery is defiant, reflective and provocative, as it showcases work by 15 artists, most of whom live in the San Francisco Bay area. In addition, the show celebrates the art of printmaking.

In her print, D.J. Agana recasts the Statue of Liberty with an ear of corn in her right hand, in a garment decorated with what appears to be Mayan patterns, standing in the midst of clouds and raindrops.

Artwork by James Williams as featured in Carving Through Borders.

Several artists utilized birds as a metaphor for freedom to cross borders. Erin Yoshi’s piece portrays hummingbirds while Imin Yeh concentrates on the milkweed plant, a prime source of food for monarch butterflies that travel between the United States and Mexico.

Other artworks detail multiple approaches to common themes. For example, Rommy Torrico combines images of corn and small gravestones with references to the North American Free Trade Agreement, a series of trade protocols for the United States, Mexico and Canada, for a surrealistic touch.

Crystal Galinda integrates several elements into her work, including text, a Chicana figure, and a circle design incorporating butterflies, a skull and a tiger.

The print by Oree Originol is stark by comparison, as it depicts a farm worker picking fruit from a tree, and a woman sitting at a Macintosh computer. The artwork seems to emphasize lack of awareness of the labor that goes into food production. Yet the woman’s role is unclear: Is she a well-paid employee of a Silicon Valley firm or someone receiving average wages?

“Who Built Your City?” by James Williams, highlights the changes that have made San Francisco one of the highest rental markets in the country and uprooted longtime residents. The artist concentrates on architecture, showing new buildings shoving aside existing structures. The upheaval symbolizes social changes.

This freewheeling show also presents Santi Armengood’s print, in which two figures seem to float by each other; Susalita Cortez’s portrayal of a fence split asunder; and a print by Mocabel, an artist identified by one name, that depicts two adults and two children waiting to cross the border.

These, and other artworks, were first displayed in 2014 at a San Francisco venue, Galeria de La Raza. CultureStrike, a San Francisco-based group that does cultural programming and advocates on immigration policies, organized the show.

They collaborated with the Syracuse University Printmaking Program. Holly Greenberg, an associate professor in the SU School of Art, and nine students traveled to San Francisco, where they set up a pop-up studio on streets within the Mission District. Students and artists worked together for two days.

That the exhibition first appeared in 2014 doesn’t make it any less relevant today. CultureStrike continues doing its work and produced “Visions from the Inside,” a series of letters from people held in detention while awaiting hearings on immigration status.

During the 2016 presidential campaign, Donald Trump discussed border security many times, stating that a wall would be built along the border between the United States and Mexico, with Mexico paying for construction costs. As president, he has reiterated that promise. It’s not clear when or if Congress will pass legislation concerning such a project.

Carving Through Borders runs through July 7 at ArtRage, 505 Hawley Ave. The gallery is open Wednesdays through Fridays, 2 to 7 p.m., and Saturdays, noon to 4 p.m. For information, call 218-5711.