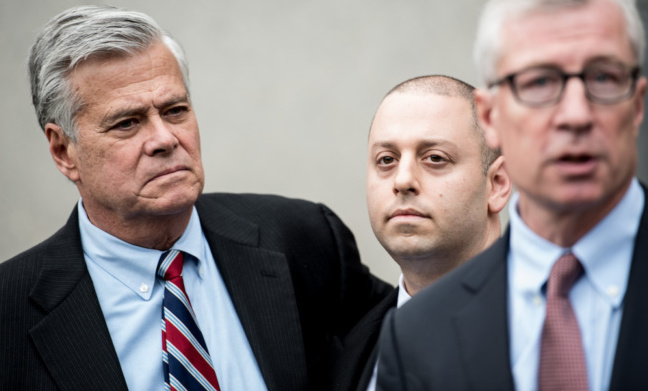 The former New York state Senate majority leader used his heavy hand as a powerful legislator to convince companies to hire his son, Adam, for well-paying jobs in exchange for doing legislative favors for those companies. They were both indicted for those crimes in May 2015.

Throughout their trial, Skelos’ lawyers maintained his innocence and argued the actions he took were not illegal, but simply part of the normal operations of state government. Skelos was then convicted on charges of extortion, conspiracy and bribery later that year. Even though he was sentenced to five years in federal prison, he escaped time behind bars while his appeal process played out. He also escaped heavy legal fees by using his campaign money to pay for them.

He escaped prison time again when his conviction was overturned by a federal appeals court back in September. And now, with a retrial looming in June, Skelos is attempting to escape once again.

Last week, court documents revealed that the disgraced lawmaker and his son have asked that their retrial be relocated to somewhere outside of New York state.The documents find that Skelos’ lawyers recommended Pennsylvania, or even as far away as Ohio, Michigan, Kentucky or Tennessee.

Their reason? It’s a classic one. The media.

Yes, the Skelos’ lawyers argued that a retrial by a New York jury would not be fair because the 2015 trial was covered so extensively by the press.

Shucks. All those reporters covering a corruption trial of one of the state’s top political leaders? Reporters covering the fifth Senate majority leader in a row to be indicted on criminal activity? How dare they?

It’s almost laughable that in their reasoning, the Skelos’ lawyers actually gave us the most truthful-sounding statement they’ve made during this entire absurd process.

“Both the media and elected officials have cheered on the prosecution as part of a righteous crusade against public corruption,” the layers wrote, according to The Albany Times Union.

Actually, I don’t think I could have said it better myself. That statement is a far cry from the lawyers’ ludicrous claims during the 2015 trial that Skelos supplying Adam with a three-figure salary job to which he hardly showed up for was merely a “normal father-son relationship.”

It’s more likely that the lawyers are referring to the mountains of editorials from national newspapers, local publications and the New York tabloids since Skelos’ arrest that denounce his actions and demand the state Legislature push through concrete ethics reform in order to prevent future Skeloses from taking advantage of public service in the future.

“Having been told what to think about the Skelos case by an indignant media for three years, the potential jury pool in New York and surrounding states is now so poisoned that the Skeloses cannot be assured of a fair trial unless the case is transferred out of this part of the country,” the lawyers said.

Yes, the editorials, blogs and opinion columns on New York state corruption haven’t exactly been advocating for Skelos’ vindication, but that’s only because hardly anything has been done to stop the rampant corruption coming out of Albany. And as the face of that corruption, Skelos’ escape from prosecution despite overwhelming evidence of abusing his political power doesn’t exactly make those editorials any kinder.

But here’s the thing. The citizens of New York don’t need the media’s editorials to, as the lawyers say, “be told what to think.” They don’t need the press to tell them to be mad at corruption in New York. As you might imagine, they’re pretty good at doing that on their own.

Polls over the last several years consistently show 90 percent or more of New Yorkers believe that ethics reform should be a top priority for lawmakers. Last November, a whopping 73 percent of voters across the state supported a ballot proposition that would allow judges to strip corrupt politicians of their generous pensions, in hopes that would deter future wrongdoing.

Not only do New Yorkers not need help being mad at corruption, but people in other states don’t need help either. Two of the states recommended for Skelos’ retrial — Ohio and Pennsylvania — both rank in the top seven most corrupt states in the union, according to an analysis by Five Thirty-Eight, with New York unsurprisingly taking the top spot. Indeed, the mayor of Allentown, Pennsylvania was convicted just three days ago of 47 counts of corruption for shaking down vendors, the very same deed Skelos is accused of doing.

It’s unlikely that Skelos will be granted his request. It hardly ever is. But even if he does manage to stand trial hundreds or thousands of miles away from Manhattan and away from the New York media, the people there will likely still find his past actions as indefensible and come to the same conclusion that the New York jury did, and as the rest of us already have. Corruption is corruption, no matter where you go.

This final attempt to escape the justice New Yorkers finally deserve will not amount to anything. And it shouldn’t. The citizens of this state have been waiting long enough to see their representatives who used their public service for personal gain get their just rewards. The time for escaping is over.