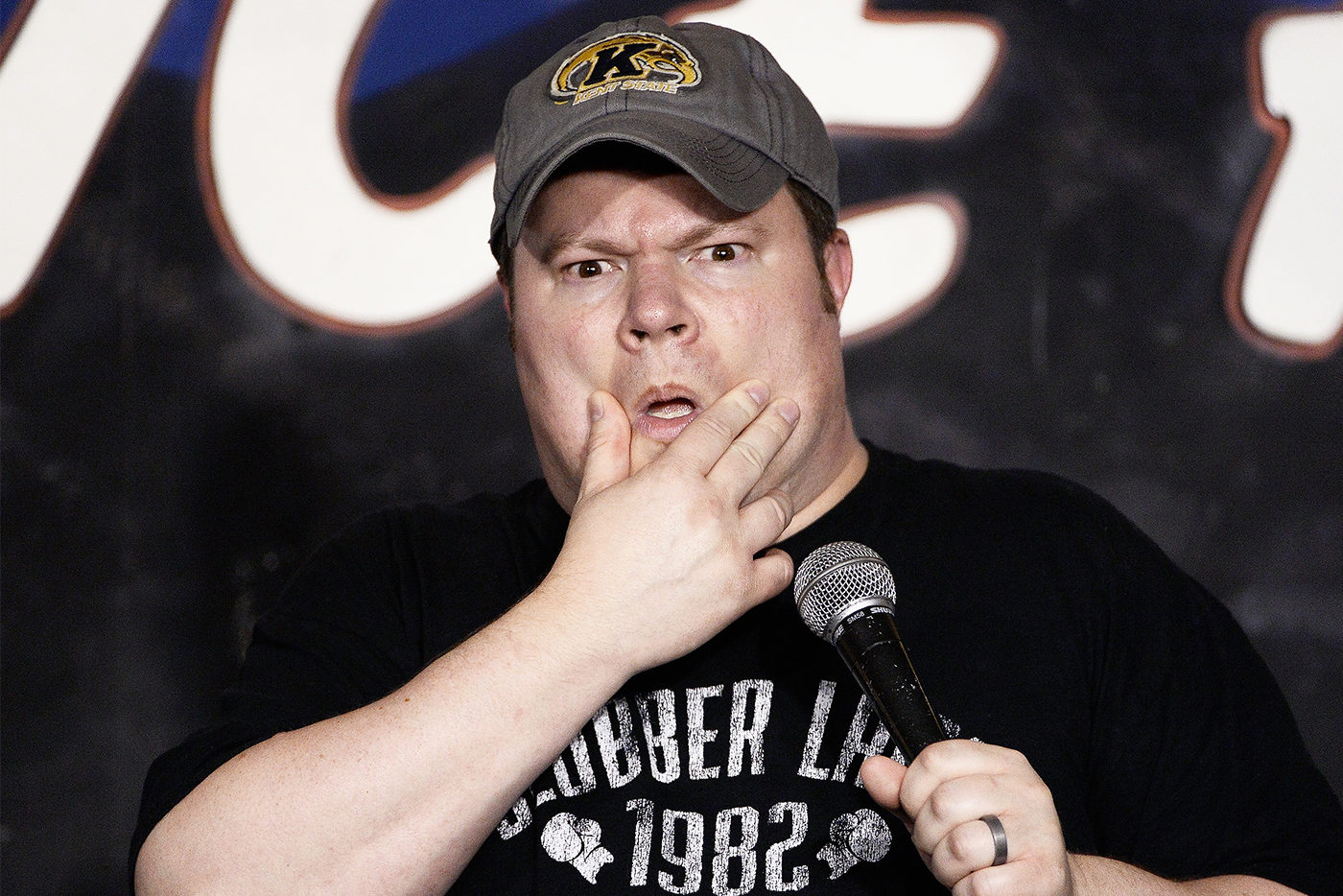 During a phone conversation from his home in Los Angeles, the Ohio-born husband and father of 1-year-old daughter Madden Jae gave some insights into his life and current projects: a sporadically updated husband-wife podcast called “Domestic Disputes,” a frequently updated series of bits via iTunes called “Caplets” and a possible animated television series.

Anything good currently going on in LA?

Right now, I’m just wasting away. (Laughs.) Well, I’m with my wife and daughter. I moved out here in 1999. It’s kind of home, unfortunately. I’m trying to produce my own animated project, which I can do from anywhere, but (laughs) my wife still wants to live here, so here we are.

We both met each other at Kent State, but we went 10 years apart. She was a fan of mine after seeing me on Chelsea Lately. I met her after the show. I normally don’t stay after the shows, but I got snowed in. The guy who introduced us married us at the same place.

So she didn’t show any signs of being a crazed stalker?

No, no. If she was a stalker, I’d be flattered. Everybody should have such a hot stalker.

She told me the night before, when she dropped me off at my hotel room, because I didn’t want to drive back–they kept giving me free MGDs (Miller Genuine Draft)–she’d give me a ride to the airport if I needed one.

I tried to contact her, but it wasn’t happening, and so I called a cab. Calling a cab in Kent is not like calling a cab in Los Angeles. You might wait a day or so.

What did you study at Kent? Is that when you got into comedy?

College was a way to procrastinate, really, and to put (comedy) off. My mom wanted me to go to college. It was something along the lines of, “If you don’t go now, you won’t get student loans.” I just wanted her to give me the money she was going to put toward my college and let me pursue stand-up. She didn’t trust whether I’d goof off, which she may have been right.

I wanted to be a stand-up comic since I was 11 or 12 years old. I pooped my pants at basketball practice in the sixth grade. It was a soul-crushing event as an 11-year-old. That was the first story I could use to tell people, and they laughed with me. Now I’m glad I pooped my pants. They’re just pants … oh, and shoes.

It was worth it. I was bitten by that bug. I would say it’s better than sex, because I’m good at it.

How did you get involved with Chelsea Lately?

I knew Chelsea (Handler) from being around. We didn’t hang out or anything. She ran a completely different lifestyle than I did. We’d say hi and talk for a minute.

When her show began, they brought us in for mock roundtables. I remember sitting there next to Chelsea. She pretty much began making fun of the way I talk, my fat neck or whatever. I was able to defend myself. We had great chemistry, because I was efficiently afraid of her. It worked out well.

Did you see your comedy and successes developing the way they have?

I always wanted to do this on as grand of a scale as possible. What I’ve realized over the years: As a stand-up, you’re more or less self-reliant. I went through the idea of development of television shows. I just want to rely on me for my creation of art.

That’s why I want to work in animation. It allows you to go wherever, especially with comedy. I’m a Simpsons, South Park, Family Guy nerd. I love that medium.

Do you get frustrated at times?

If you ask my wife or members of my family, they’ll tell you I’ve done really well with my career. I feel like I haven’t done shit yet. I look at my career as the hill that gets higher faster than you can climb it. Goals get loftier as I go. I don’t want to stop getting better. I never want to stop making something, you know, memorable.

Talk about the animated series.

It’s called Cartoon Comic. I started writing it a couple years ago, before our baby was even considered. It’s basically my life. I look at it as a stand-up’s life: I woke up today and dot-dot-dot.

I love how Louis CK did his sitcom. He opened the door for a lot of comedians to break out of the standard mold of what industry people want to see. They wanted Seinfeld or the structure of a character playing out over the course of eight years.

Sometimes his daughters are in the show, and sometimes they are not. It all depends what that experience was for him. What he did is genius.

Has the startup been difficult?

I’m self-funding the demo, which is not cheap. It’s easier for them to see rather than to be told about it. I’m trying to produce a demo, which is basically like a trailer. It’ll be five minutes, because nothing that I do can be brief.

The next step would be shopping for networks. If it doesn’t get picked up, I’ll put the trailer on Kickstarter and fund the series. I believe in the show and can’t wait to get started.

Your other endeavors, like your podcast, is a continuing saga. Was your wife on board with creating Domestic Disputes?

We haven’t done an episode in a couple months. We’re lazy about it. We record episodes from home, which is beautiful. But the problem is working around the schedule of the baby. She’s either asleep or she’s awake and won’t let us do it.

My wife is more capable than one may give her credit, for not having any experience in comedy or anything like that. She’s able to push my buttons while we’re recording, which is fantastic. But she also does her own voice in the animated show.

She and I started it out with taking a specific topic we’ve been arguing about around the house, and we’re going to work the podcast around that. Listeners can vote on who they think is right. But three episodes in, it was like: Whatever, just hit record and we’ll start bickering. After four years of marriage and six years of living together, we don’t have a shortage of things to complain about. The love is there.

Any tips for marriage?

For a long time I was a very single man. I wasn’t good at dating. If I went out with somebody and I didn’t think she’d be the one I’d end up marrying, I’d be like what’s the point of going out again? I’d rather just hang out with my dog.

When you find the right person, the worry isn’t there. There’s no thinking. This is exactly the person I should be with. I never had to second-guess what her intentions or feelings were. I’m not that hot to look at, so she has to like me as a person.

Any other future projects or specials?

Caplets comes out through iTunes every month. I’ve done 31 of those, which is actually kind of amazing. (Laughs.) After about the eighth one, I had nothing. I was writing them in the car, and I still am. Sometimes they turn out great, and other times I’m like, oh no. Now that I’m this far into it, I’m proud of the work. It’s a long time to do new material every 30 days. When Madden can sleep a little better, we’re going to do podcasts again.

For more on John Caparulo, check out johncaparulo.com, his comic bits “Caplets” available through iTunes and his podcast “Domestic Disputes,” which can be accessed via his website or SoundCloud.