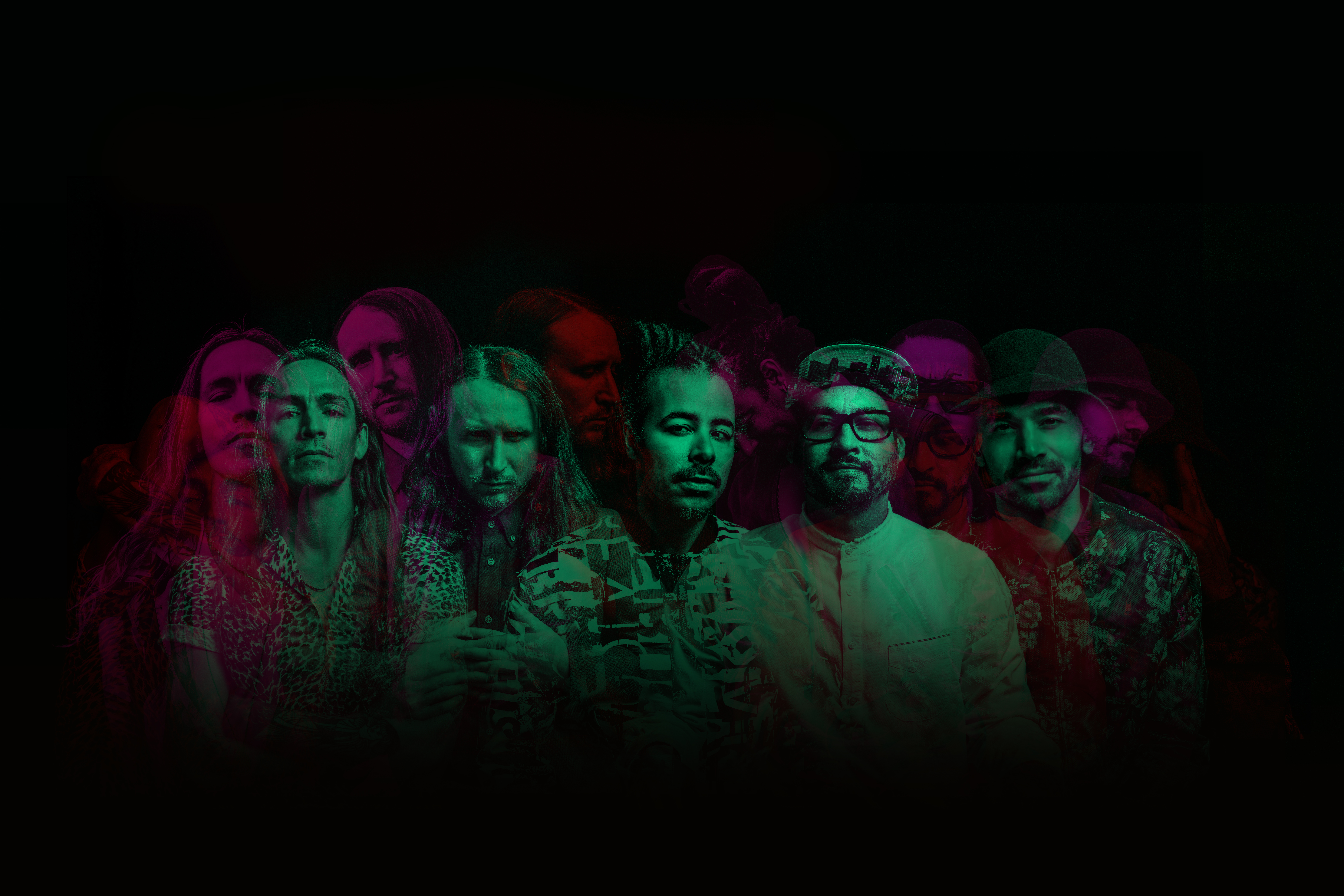 California-based alternative rock band Incubus takes the stage and makes their debut at the Lakeview Amphitheater in Syracuse.

Incubus, by definition, can be either a demon or a California alternative rock band, which has roots dating back to the early 1990s. Luckily, central New York and the Lakeview Amphitheater, 490 Restoration Way, will be being paid a visit by the latter.

This afternoon, we were able to chat with Jose Pasillas II, drummer and founding member of the band, which is celebrating its eighth studio album 8, which was released in April of this year.

Congratulations to a new album and another tour. How have things been?

Things have been great! It’s been one of my favorite efforts thus far. Everyone’s been receiving it well. In the last week and a half of shows, we’ve been playing a lot of new material. It been really good and fun.

There was a six-year span between If Not Now, When? and 8. Did that help with writing and recording?

We don’t really don’t plan a specific amount of time in between records or what we’re going to do. It was a natural gap for us. We put out the Trust Fall (Side A) EP a couple years ago and were planning to produce a second EP. After juggling writing music, touring and rehearsing it would have been a bit much. That following summer we toured with the Deftones.

We decided after that we’re going to focus our attention solely on writing, so we came out with the LP. It was a busy time for all of us. We were also busy with our individual projects, and then it just happened to be six years of time. We don’t question time or process anymore. We do what we feel is natural and follow intuition.

You’ve been performing as Incubus since 1991. How has music progressed for you as a band?

By in large, it’s the same process. For the most part, we write as a band. The ideas come from Brandon (Boyd, vocals) and Mike (Einziger, guitar) vibing off each other, whether it is a simple idea, a melody or lyric. Mike may also come up with a couple written guitar sections. We’re all in the room together, devouring the idea. The concepts and songs change and evolve. Yeah, that part has been pretty much the same since the beginning.

The music is evolving. We’re a rock band, an alternative rock band. The music we’ve been playing, I think, has been evolving from record to record. They’re vastly different. I think it’s pretty obvious. It’s fun for us.

I think we are waiting longer in between records is because we’ve written so many songs. We want to push ourselves, push the envelope with recreating ourselves.

How have you developed as a performer?

I just keep playing. There is no limit to art or music. I find inspiration in people, music and places. I’ve enjoyed being in the moment.

I didn’t have formal training, but followed and listened to my favorite drummers. I emulated what they did and made my own style through the years.

I’ve kept the same set up as I have for years. I play DW, Drum Workshop drums, Zildjian cymbols and Remo heads. Those companies have been really good to me.

Incubus has been labeled with term nu metal in the early years, and it’s followed your career. It doesn’t have the best connotation. Does that affect you in any way?

That was a category we were lumped in. We never fit into any genre of music our entire careers. We grew up in the ’90s, putting on shows with Pennywise, Save Ferris, Korn, Pantera, Black Sabbath, 311 and more. We’re across the board, never fitting in, but we made ourselves acclimate to be part of the music scene someway and somehow. It’s just a term, so people can get an idea where you fall even if it may not have anything do to with you. We don’t pay mind to it. We’re a rock band and play rock music.

To go along with not falling into a category, how has the music industry changed in the last couple decades?

It’s a radical difference. We were a band which got involved with a label interested in long-term and developing the band. Nowadays , if you don’t have a song that’s palpable to a large audience right away, it’s like you don’t have a chance.

t’s changed a lot in that respect. It’s just like how people consume music. You don’t really sell records anymore. You stream music. To calculate how well a band is doing is looking at streaming. It’s the day and age of music, but we’ve survived it. In 26 years, we’ve developed a great fan base where we don’t have to sell music. We can put out songs, tour and have that loyal fan base.

It’s not good or bad, but it’s just changing. Genre lines have blurred.For this new album, we worked with Skrillex. That might sound strange, but it’s not when looking at the greater context of music. For me, it’s exciting.

Did you receive criticism for working with Skrillex? How did you deal with it?

No. Actually we haven’t. We didn’t work with him in a typical form where we write a song and Skrillex comes in and does dub step with it. He came in with a handful of songs and mixed the record. We didn’t have a conventional guy mix it. He wanted to try it out, and what he brought back was so compelling. The songs were colorful and he very much respected what we came up with as a band, but he made it that much better. It was a pleasure working with him, because his energy is amazing.

Incubus switched from Epic/Immortal (Sony) to Island. You enjoy working with major labels, but would you ever consider an independent route?

Minus the first few years, we’ve been with a major label. For us we’ve played with the idea of going independent or maybe putting a record out ourselves, but it takes a lot more time and effort to build a team, which has to support you. Also, we’d have to learn all the facets of distributing and marketing. We’ve always chose to go with something that’s had that in place. We were with Sony for 17 years. We’ve also had great relationships with Island. When we signed with them three years ago, it’s been working out better. But who knows what will happen in the future? Take it as it comes. The bridges will be crossed when we get there.

I was about to ask: How do you see Incubus evolving in the next five years?

You can’t really say how. I just imagine us continuing to write, put out records and playing the music live.

How touring with Jimmy Eat World? They’re only a couple years “younger” than Incubus.

They’re a great group of guys. We performed with them a long time ago. It’s been cool to get an extended tour with them. Judah & the Lion are opening up for us, too. They’re a group filled with a lot of really good guys. The bill is really solid, and it’s only the beginning of the tour.

Let’s go back to the album. Talk about that song “When I Became a Man.” It’s a really weird, funny interlude that reflects to little nuggets you’ve done on Fungus Amongus and  S.C.I.E.N.C.E. Where did that come from?

(Laughs.) It is a little nugget. That song was completely unplanned. We were jamming out at our producer’s studio. Chris (Killmore, keys and turntables) played a programmed beat on the synthesizer. Brandon was on the mic, and it caught his attention. The song literally came out right then and there. It was really funny, but we weren’t going to put it on the record.

We played it for Skrillex. He’s like, ‘Dude, this thing has to make the record. It’s funny. It’s you guys.”

Any pre- or post-show superstitions?

We just hang back and relax, wait for show time. We’re an easy going band before and after. We’re lucky to be performing music?

What are you listening to currently?

I find myself listening to a lot of the things I’ve listened to as a teenager. I always go back and listen to my collection at random.

It’s funny. I’ve been listening to a lot of Top 40 music with my daughter. She loves ZEDD, Rhianna, Shawn Mendes. She’s a preteen. But we’ve been connecting over it. I’ve been exposed to music I normally wouldn’t listen to.

What can people expect from the show?

It’s going to be a fun ride for an hour and 45 minutes and an awesome visual show. Please check out Jimmy Eat World and Judah & the Lion. It’s a great night of music.