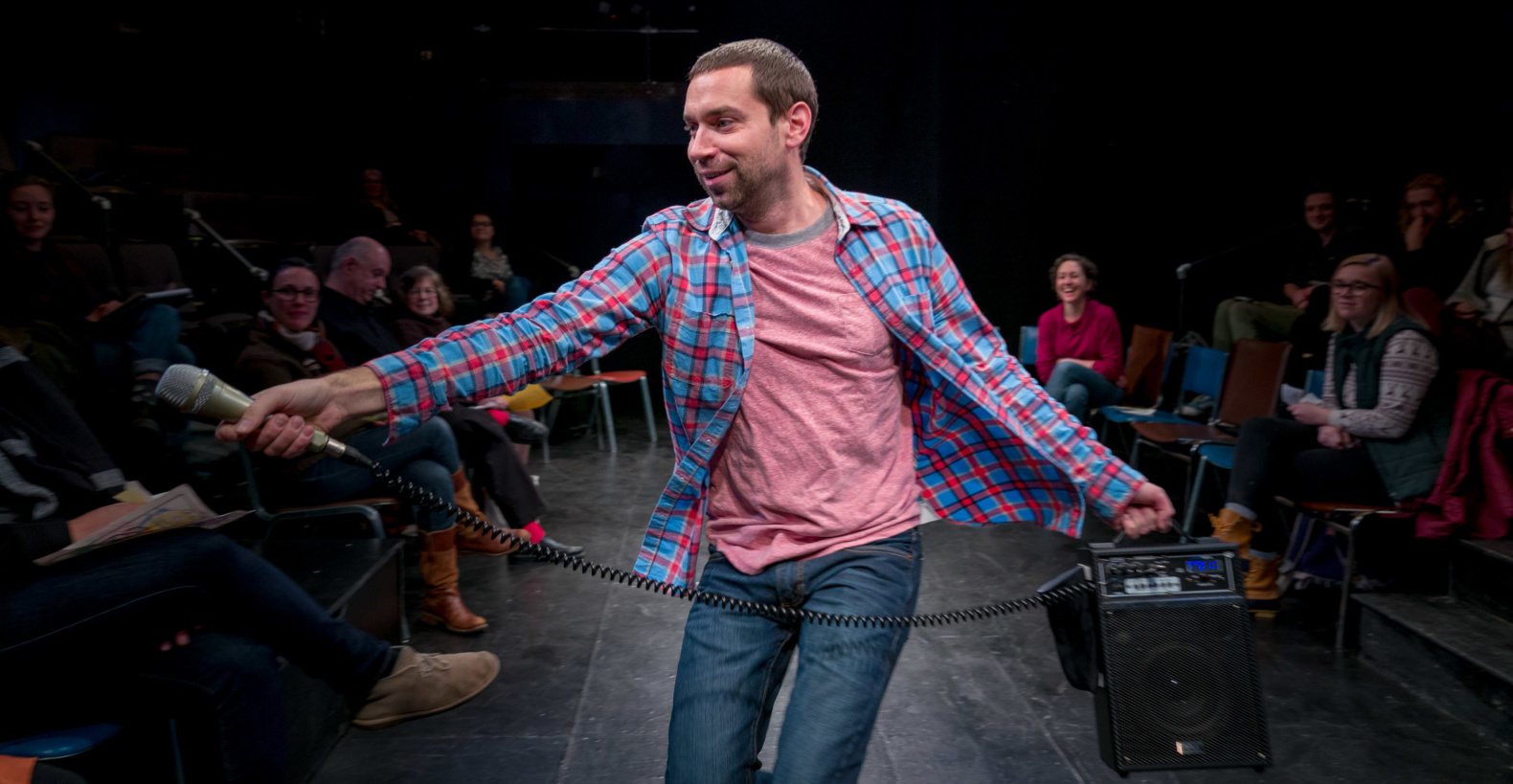 The words “includes audience participation” can provoke the same wariness in a playgoer that “some assembly required” do in a gift-giving parent. Will you become the tongue-tied stooge of an intrusive performer just for sitting in the wrong place?

In Duncan Macmillan’s new play Every Brilliant Thing, running through Dec. 10 at Ithaca’s Kitchen Theatre Company, perhaps 20 audience members sitting in different places get into the act, but most of the time it’s painless, like reading a one-syllable word, on cue, off a Post-it note. But the dialogue between player and audience, the complete deletion of a fourth wall, is unlike any other play ever to appear in these parts.

Macmillan, a hot British youngster still in his 30s, is known for accessible, audience-friendly material and radically innovative packages. His Lungs (March 2014), a love story, is set on an absolutely bare stage where actors had to prowl around without so much as a single taped marker on the floor. He’s part of the school called the Apathists along with fellow Britisher Mike Bartlett. Their nearest American ally would be Annie Baker.

For the first 15 minutes of Brilliant, it doesn’t feel like watching a drama at all. The already intimate Kitchen Theatre has erected more seats on the stage so that the performance space, now in the round, is at the widest, no more than 12 feet across.

Karl Gregory, the Syracuse University graduate who has become an audience favorite in Ithaca, is still handing out Post-it notes as he begins the dialogue Macmillan has written. When an audience member breaks into an (apparently un-scripted) extended coughing fit, he consoles her without dropping a beat. Most of the audience knows him, dressed casually in a plaid overshirt, and we’re never quite sure when he ceases to be Karl and becomes the protagonist.

We’re into the action when we hear the resonant date, Nov. 9, 1986, repeated several times. The protagonist’s mother attempted suicide, a shattering experience for an 8-year-old. Most of the action, including the interaction with the audience, is a means of responding to this trauma. But whose trauma?

A little legwork reveals that Macmillan based the play on a short story titled “Sleeve Notes,” and he appears to have been born about 1980. But in the three years the play was in development at venues like the Edinburgh Fringe, where it was a huge hit, the protagonist was played by Jonny Donahue, a roly-poly comedian with a working-class accent. Donohue not only took the role to New York City and several U.S. cities, but his name is cited on the program, not as co-author, but a more tentative “ . . . with Jonny Donahue.” Yes. Comedian. Brilliant confronts suicide and depression with comedy.

With the help of veteran Kitchen director Wendy Dann, the role is tailored to fit Karl Gregory. He speaks the lines with American stage diction in American idioms. When he and a lover repair to a gay retreat it’s Provincetown, not some spa in the United Kingdom.

The most British part of the play is the word “brilliant” in the title. We tend to inflate it to denote conspicuous excellence, as in Einstein was brilliant. In Britain it can mean merely satisfying, apt or spot-on.

Thus when the protagonist asks for consoling things that make life preferable to suicide, the “brilliant” list begins modestly: Ice cream. Water fights. Staying up past your bedtime and being allowed to watch TV. The color yellow. He acknowledges that these are things an 8-year-old might crave. Thus brilliant things need not be extraordinary, like dinner at Maxim’s or climbing Mount Everest, but they can include the arts. The narrator favors black American singers like Billie Holiday, and even more Ray Charles’ “Drown in My Own Tears.”

The monologue examines some of the romantic appeal of suicide, which is traced back to J.W. von Goethe’s Sorrows of Young Werther and the dreadful beguilement of celebrity suicides like Marilyn Monroe’s. Death’s beckoning arises from more than disappointment or a sense of worthlessness.

Optimism has a poor reputation among intellectuals, but has fared better in popular culture. Irving Berlin’s 1954 hit “I Count My Blessings (Instead of Sheep)” anticipates Macmillan’s intentions, but it’s a bit sappy. Every Brilliant Thing grabs you by the lapels and makes you laugh and listen. The audience is pulled in, even the woman who must remove one shoe and one sock and turn that sock into a hand puppet. Karl Gregory, a dynamic comic actor instead of a mere comic, argues for life, even up to a million brilliant things. SNT