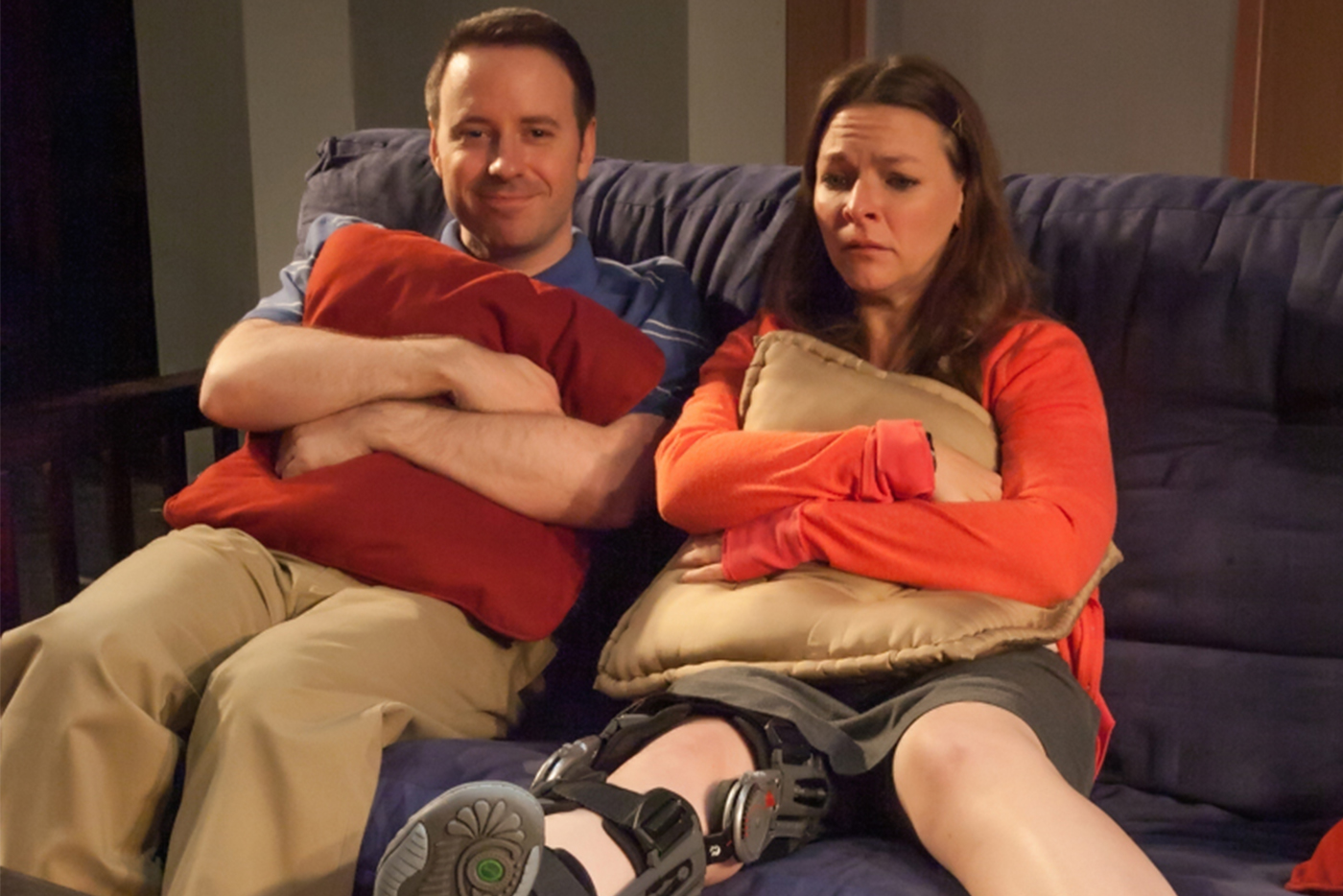 His was an outrageous proposal: $2,153 for dance lessons. Ever Montgomery (played by Zack Calhoon) initially looks like a clumsy uber-nerd, his plaid shirt buttoned up to the collar. He might even be a stalker.

He lives in the same building on the Upper West Side as inactive Broadway dancer Senga Quinn (Rachel Burttram), and he’s been watching her. She learns that the source of this inflated fee-for-service is that Ever will soon have to attend a formal dinner where he is to receive an award and — to his dismay — be required to dance. So he’d like to take to lessons pronto with a pro.

Now at Ithaca’s Kitchen Theatre Company, Mark St. Germain’s Dancing Lessons is a one-act, a bit less than 90 minutes, but so complex that nuggets of exposition appear nearly all the way through. We never learn everything, such as the implicit significance of their uncommon given names Ever and Senga.

Sara Lampert Hoover’s deft direction underscores St. Germain’s intentions, however. When we first see Senga she’s lounging listlessly on a couch, half-covered by a blanket, trying to tune in the right music and not finding what she wants. Only when she stands up do we see that her right leg is encased in a stiff brace. This is before we learn she is — or was — a dancer.

Well before the beginning of the action Senga had injured the leg in an automobile accident, but she remains immobile because of a rare allergy to anesthetics, forbidding an easy return to her former career. Disconsolate, Senga has withdrawn from the world and barks an unfriendly “Go away!” to Ever’s knock at the door, even before she knows what he’s about.

St. Germain’s creation of Ever is a dizzying risk: American drama’s first romantic hero with Asperger’s syndrome. Zack Calhoon’s portrayal is a masterwork of authenticity and restraint. His Ever has all the physical tics, like hands pressed against thighs, the unwillingness to look the listener in the eye, and the staccato speech rhythms.

But this is no ABC After School Special urging our sympathy and concern for the afflicted. Instead, Ever mocks his condition, calling himself an “Aspy” and contrasts his progress with that of “neuro-typicals.”

Along with this he is a high achiever with an academic career in the earth sciences, hardly a victim. A keen ecologist, he rattles off statistics on climate change without reference to notes, but also with a sense of urgency. That facility with details recalls a patch of Dustin Hoffman’s Raymond in the 1988 movie Rain Man. It’s obsessive and a bit more than Senga wants to hear, and it’s not because she’s a climate denier.

Ever’s principal deficiency as a dance student still remains: He does not want to be touched. And she’s still not standing on two good legs.

As we begin to consider how this conflict might be resolved, we also realize that both Ever and Senga are more familiar figures than they first appear. While Senga temporarily achieved the glamour of Broadway, an allure thousands of American girls aspire to, it has given her nothing to rest on, including not very much money.

Like a character in A Chorus Line, she keeps calling up her roots. Hers are in Hamtramck, Mich., a hardscrabble patch of post-industrial rustbelt surrounded by Detroit. It’s also an immigrant town; Quinn would not have been a common name there. But it was redeemed by a strawberry festival. Ever assures her he knows all about it. We can also feel that playwright St. Germain wants us to see that broken leg as a metaphor for all the other wounds that Senga is carrying.

If Ever’s affliction is not also metaphorical, it becomes less strange as the action skips on. At bottom Ever brings the guilelessness of a Charlie Brown, and his impossible aspirations are winning rather than absurd. Which leads to this show’s singular achievement: It’s often laugh-out-loud funny.

To describe the play as a comedy about Asperger’s syndrome is to make it sound like an exercise in bad taste. But once we see the physical peculiarities and the distinctive speech patterns as something we might possess ourselves, Ever’s difficulties become our own. And Calhoon’s timing enhances the lines, not unlike the way a Yiddish accent can make many jokes funnier, as Mel Brooks has long been telling us.

The intimate space of the Kitchen Theatre’s 99-seat venue enhances the intensity of Dancing Lessons’ conflicting emotions. Senga’s emotional journey takes more twists and turns in what is, we never forget, her bedroom. Actress Rachel Burttram lays Senga’s soul bare and invites Ever to touch, a caress they both need. David Arsenault’s set and Tyler M. Perry’s lighting allow us to see through walls as well as epidermis.

Playwright Mark St. Germain is an important and highly individual writer, not a shadow or artistic sibling of some better-known figure. His home base has been Barrington Stage in the Berkshires, with many projects going on to off-Broadway.

Local audiences will remember his Camping With Henry and Tom, produced by Contemporary Theatre of Syracuse in the mid-1990s, in which Richard Harris as Warren G. Harding, otherwise our worst president, saves democracy from the incipient fascism of Henry Ford. A more recent success, Freud’s Last Session, in which the psychologist and writer C.S. Lewis debate about God, ran for two years off-Broadway. It’s high time we see more of him around here.