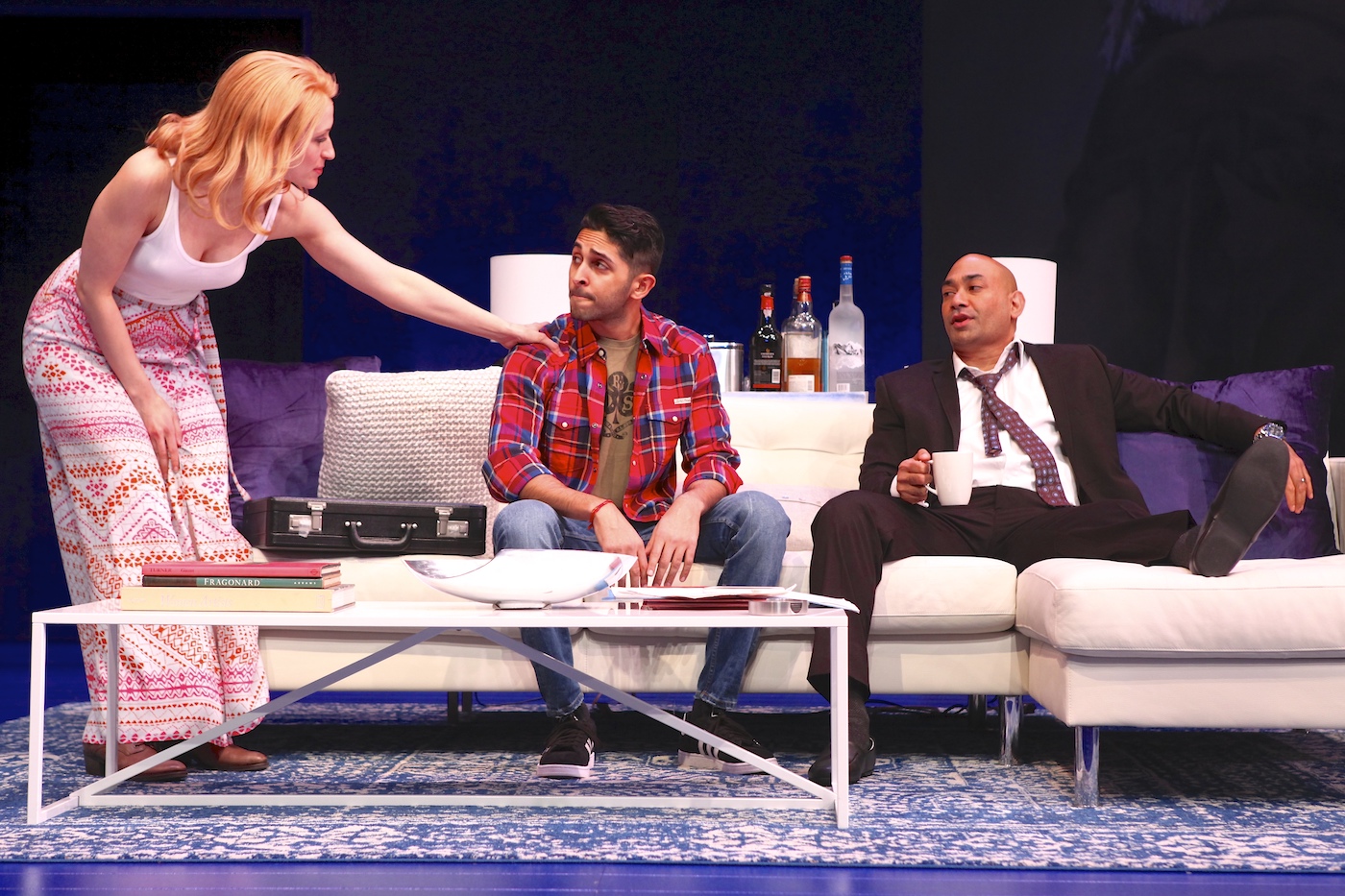 Set designer Lee Savage might almost be listed as a co-director for the Syracuse Stage production of Disgraced. Ayad Akhtar’s Pulitzer- and Tony-winning one-act drama, directed by May Adrales (remembered fondly for the 2014 production of Chinglish), runs through Feb. 12.

We’re in one of the American theater’s favorite neighborhoods: the fashionable Upper East Side in Manhattan. The large apartment is graced with stark, white furniture, well lighted by Seth Reiser, but with curious Asian accessories, like a gilt dancing Shiva at stage left.

Overpowering the scene is an outsized print — big enough to be the screen of a drive-in movie — of a Velázquez portrait that hangs in the Metropolitan Museum of Art. Soon we are told the subject of the 1650 portrait was Juan de Pareja, in life the artist’s slave. Not a European, de Pareja was known by the archaic designation of “Moor.” 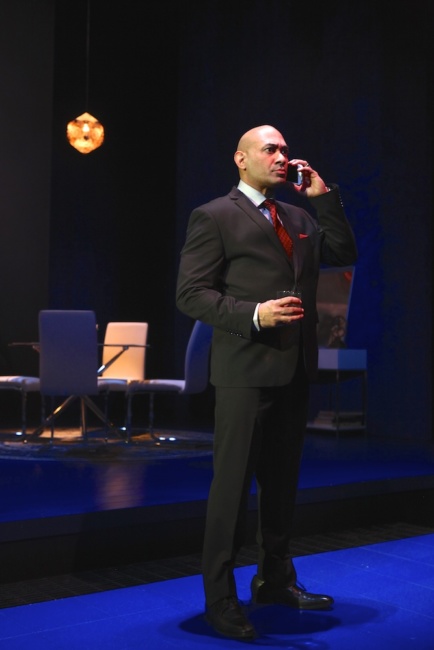 The initial significance of the artwork is that artist Emily Kapoor (Victoria Mack), a slender blond woman, has taken it as a template for her portrait of her husband Amir (Andrew Ramcharan Guilarte), a man of South Asian heritage with a shaven head. We will learn that Amir is a formidable presence, as a corporate lawyer for a high-powered law firm specializing in mergers and acquisitions. Yet at the rise of the curtain he looks a bit diminished: His pants are off because Emily is concentrating on details above the belt.

Emily, although clinging and loving of her husband, is also riding an upward arc. She’s going to have a big show soon, and her art dealer Isaac (James Ludwig) and his wife, Jory (Gillian Glasco), are expected for dinner.

Amir, like playwright Akhtar, is of Pakistani heritage, and although raised a Muslim is no longer observant. He calls himself an “apostate.” Because his parents were born on either side of the date of the violent splitting apart of India and Pakistan in 1947, his father was technically born in India and Amir is happy to be taken as an Indian. When Emily professes a love of Islamic art and seeks to employ motifs from it in her work, he disparages her because he thinks the religion is “a backward way of thinking.”

The contrast between husband and wife is emphasized with the unexpected arrival of Amir’s nephew, Hussein Mali (Nik Sadhnani), who has renamed himself Abe Jensen (Jewish and possibly Scandinavian) in order to appear assimilated. Abe is agitated by the arrest of a local imam on possibly trumped-up charges. At first Amir wants no part of this, but Emily insists, and the husband complies. He will appear in court to support the imam but not as an official counsel. The heat surrounding the case means that the case is reported in the press, and Amir’s name appears in an article in The New York Times.

Dinner is served, and it becomes the core of the drama. Art dealer Isaac arrives first, and speaks frequently of his Jewish heritage, followed by his wife, a member of Amir’s firm and, as we learn, a competitor in taking a slot as partner. She turns out to be a sleek African American who knows how to speak the language of power. Everyone’s so cool and urbane, no one pays attention to her race.

This feels a bit schematic for a while: a Jew, a black woman, a WASP and a Muslim. At least we know that no one at dinner is a Breitbartian knuckle-dragger. But this is not cable TV, and characters do not speak from their designated viewpoints. Instead, what might have been said by Diner A is actually pronounced by Diner B. We know already that Emily is a champion of Islamic art despite her husband’s disdain. Isaac, counter-intuitively, also speaks up for Muslim culture, earning an even stronger rebuke from Amir.

For such a short play, only 90 minutes, Disgraced is long on exposition. Just about everyone gets in a remark on the etymology of the word “Islam,” meaning perhaps “submission” or “peace.” Eight pages of program notes bring us up to speed on such questions as the acronym behind the naming of Pakistan and the works of the 13th-century poet known as Rumi.

Among the many successes that director May Adrales delivers with this play is her handling of all this erudition. Not only does data fly by like so many champagne bubbles, but tension is growing between Amir and the other three, under the dialogue, no matter how assimilated, reasonable and secular he may sound.

He is the Other. Jews, blacks and women certainly know discrimination, but he derives from a tribe colonized by imperialism. Thus comes his unexpected, shocking, atavistic response to remembering the 9/11 attack on the World Trade Center. Compounding this are two unrelated issues: a sexual secret we could have done without and some shattering news concerning Jory’s career moves that prompts Amir to bellow to Jory, “I’m the nigger here.”

Along with its many awards, Disgraced is a play designed to provoke discussion. On the weekend when President Trump has banned travelers from seven Muslim-majority countries, and mosques have been burned to the ground in Texas and Quebec, it would be a mistake to think the play is primarily about politics and the clash of civilizations. One of the things Disgraced makes clear is that tolerance by itself is ineffectual, a virtue that rewards only itself. What we have here is the fall of a good man, who turns out to be more like Juan de Pareja than portraitist Emily ever conceived. A Moor.

The word “Moor” comes up repeatedly in the dialogue. Surely playwright Akhtar is inviting us to compare Amir with the most famous Moor of them all, Othello of Venice, who also secured an elevated place in his adopted society. His principal Iago turns out to be Isaac, and delicate Emily, so flattering, loving, even fawning, is his Desdemona.

Andrew Ramcharan Guilarte brings many colors to the role of Amir, including a disarming lightness in earlier scenes. He’s not patronizing when he shows that he knows better against Islam’s naïve defenders. Most agreeable is his reluctance to give into his darker impulses as we head toward the denouement.

James Ludwig’s Isaac starts out as such a charmer, as he papers over the character’s innate duplicity. Gillian Glasco’s Jory is so polished and articulate we sense that management may have many reasons to prefer her. Victoria Mack disappoints as Emily, marred by poor projection. And Nik Sadhnani’s Abe/Hussein is indeed two characters in his first and second appearances. Syracuse actor Bezhad Dabu originated this role in the first Chicago production.

Despite More Diversity, Are The Oscars Still Out of Touch?
Barroom Philosophers Get Philosophical
To Top