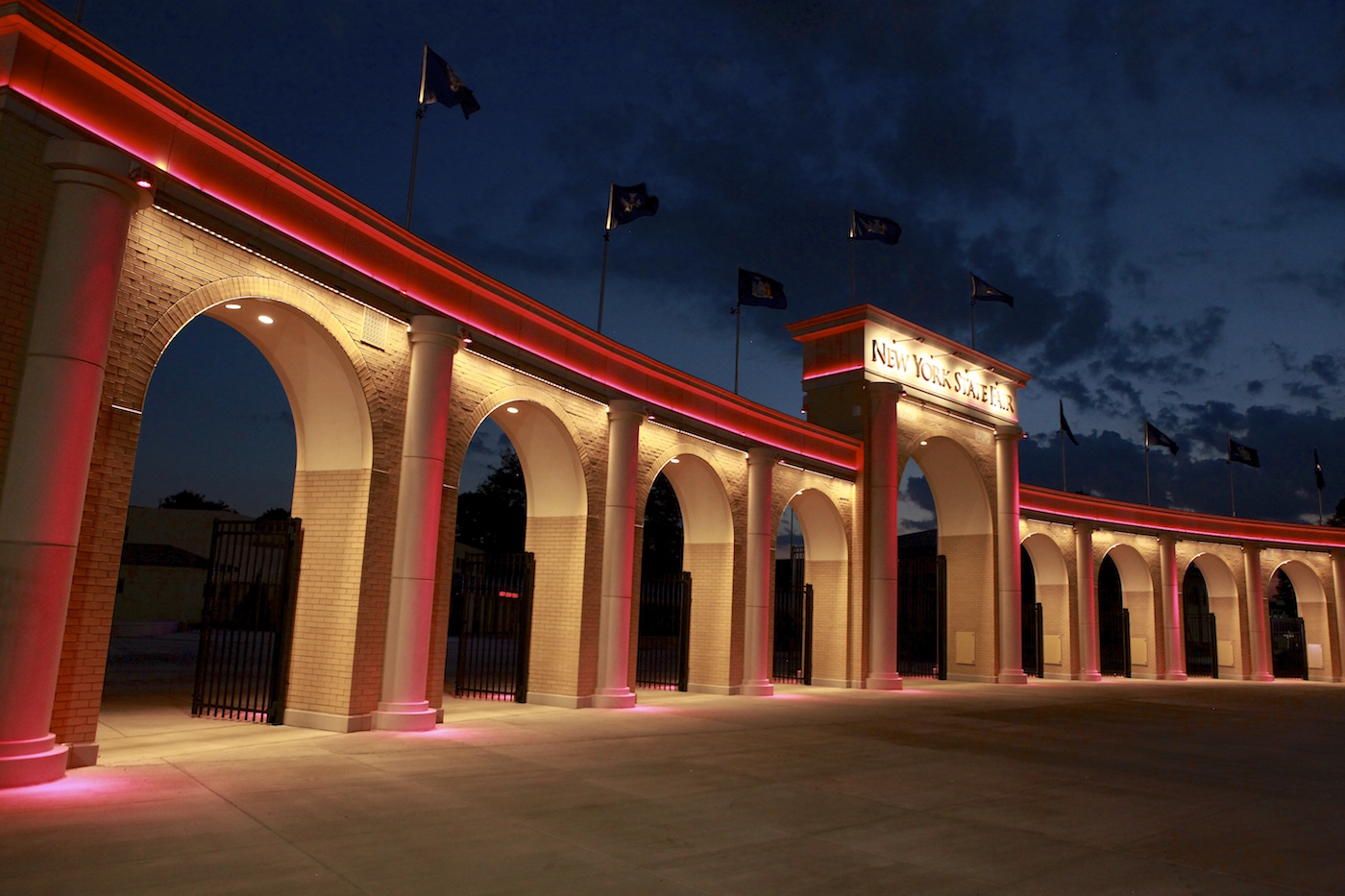 Our most cherished summer tradition gets a big-time makeover.

OK, let’s address the elephant that’s not in the room: the Grandstand, which made an explosive exit from the New York State Fairgrounds last January. And yes, for those who visited the Syracuse Nationals car show in July, the Grandstand’s void was as apparent as David Letterman’s dental work.

Yet the time for mourning is officially over as the State Fair kicks into its end-of-summer, 12-day run starting Thursday, Aug. 25. There’s simply too much that is brand-spanking new, thanks to a $50 million renovation that literally starts at the front door.

That’s where fairgoers will see the new main entrance, which is a flashback to the arched carriage-gate style that welcomed turn-of-the-20th-century visitors. Also new is the concrete plaza directly behind Chevy Court, with a digital billboard display that details the day’s events.

Other cosmetic wrinkles include four landscaped islands that are now situated on Hiawatha Street between the Dairy and Cattle buildings. Near the annual PanAfrican Village is a new fair entrance, titled Gate 11A, on Bridge Street that allows easier access to walkers coming from Solvay.

The state’s Lottery Players Pavilion, another victim of the wrecking ball, has relocated its scratch-offs to the Coliseum’s former restaurant space. And the ramp to the Dairy Building’s Milk Bar (still a quarter for cups of white or chocolate moo juice, although it briefly flirted with a 50-cent price) now features bricked steps that were buried for years underneath mounds of concrete.

Meanwhile, several restaurants got the physical boot from their longtime stands, which were yanked down with the Grandstand. Some will return in tent-like configurations close to their original spots. The legendary Gianelli’s Sausage food stand, with its distinctive artworks by local favorite Elliott Mattice, will cook up a storm in one tent, with an adjacent tent for seating, both near the Horticulture Building. Even the venerable Potato Booth, with $1 spuds plus sour cream, cheese and butter as toppings, has moved down the hall to the restaurant space inside the Horticulture Building.

Filling much of that Grandstand void will be an expanded 15-acre Midway with 75 rides from Wade Shows, including Surf’s Up, which involves a giant, spinning surfboard. (Will Brian Wilson hang 10 before his Aug. 29 Chevy Court concert?) Also, Kiddieland has been relocated from the fair’s boondocks to a spot near the International Pavilion. And Nickelodeon’s PAW Patrol cartoon series will bring its Roll Patrol road tour on Friday, Sept. 2, through Sunday, Sept. 4, at the Family Fun Center near the Youth Building. The 18-wheel semi-truck provides an interactive experience for kids of all ages.

Hawk Creek Wildlife Center, from East Aurora, will bring its popular “Birds of Prey” show featuring the winged creatures daily at 11 a.m., 1:30 and 3:30 p.m. at the New York State Park. Hawk Creek also has a new fair event titled “Cats Gone Wild!” that features endangered felines; the shows take place at noon, 2:30 and 4:30 p.m. near the International and Horticulture buildings.

And for those in the mood for a snappy wisecracker who tosses around bowling balls and sharp instruments, Hilby the Skinny German Juggler Boy begins his stint on Monday, Aug. 29, with daily shows at 1, 4 and 7 p.m. near Chevy Court. While much of the 2016 New York State Fair may indeed be new, the annual return of Hilby’s ham-on-wry routine should be a welcome comfort zone for tradition-minded fairgoers.

View photos of The Fair’s former self: