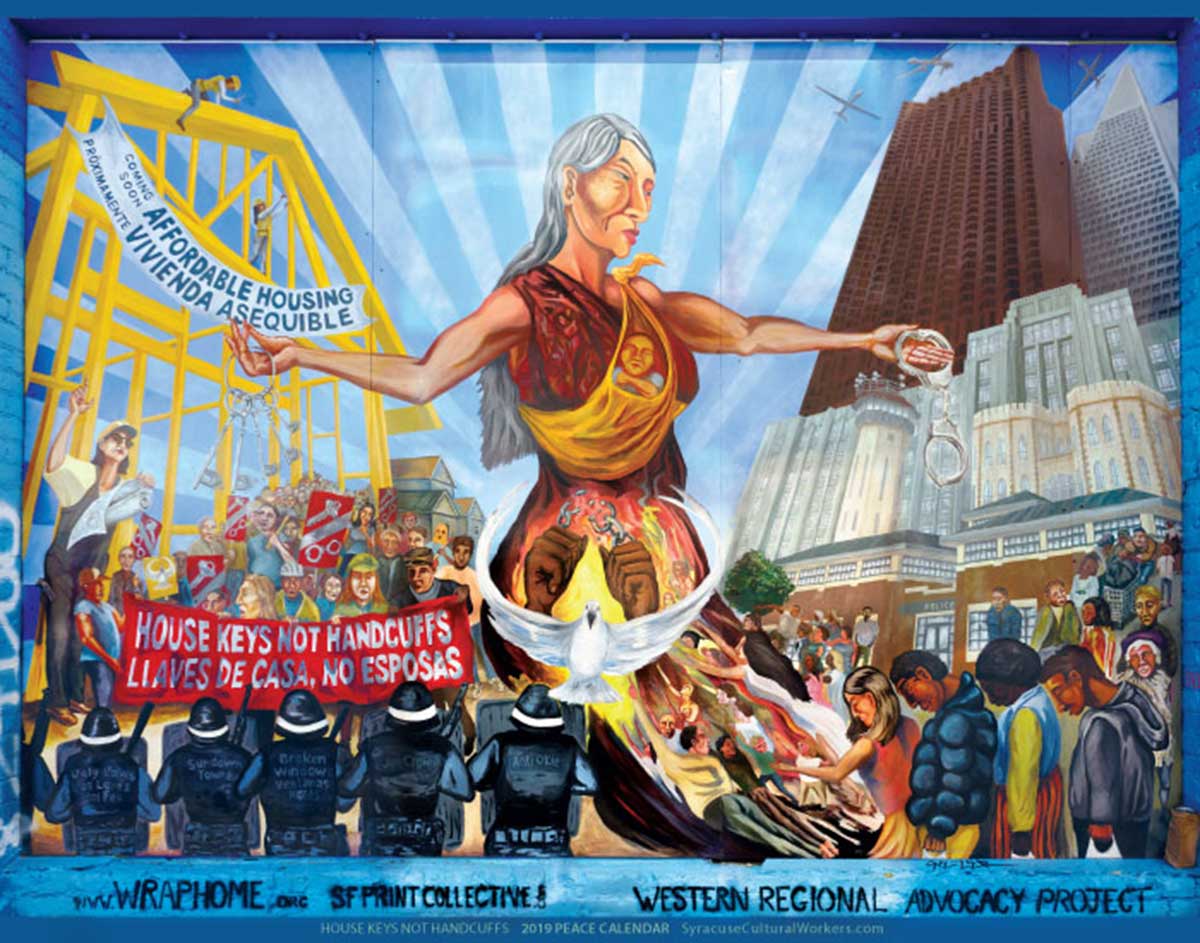 Images from the 2019 Peace Calendar range from artistic illustrations about environmental protections to photos of global demonstrations for human rights.

Each edition of the annual Peace Calendar published by the Syracuse Cultural Workers reflects a process of mixing and matching, choosing photos or sculptures or other artworks that explore various themes. The works must be both relevant and visually incisive; this is, after all, a calendar.

And so, the 2019 Peace Calendar references work by Nizar Ali Badr, a Syrian sculptor who makes his pieces entirely from pebbles. The illustration for August features six tiny stone figures, each carrying a heavy load. They represent refugees, and the page deals with the refugee crisis and the question of global responsibility.

Millions of bags and other plastic items are dumped into oceans, prompting artist Angela Haseltine Pozzi to found Wash Ashore. The group, based in Bandon, Oregon, calls plastic the ultimate predator, a major threat to sealife. Wash Ashore organizes pickups of beach trash and then recycles the waste into large, colorful sculptures. In the calendar, there’s an image of a piece representing a parrot fish.

An image of a mural in San Francisco’s Clarion Alley has a woman as its centerpiece; in one hand, she holds house keys and in the other handcuffs. The work, and accompanying text, references several developments: an affordable-housing crisis in San Francisco and other cities, quality-of-life laws and ordinances designed to regulate homeless people, a failure to fully fund federal programs supporting low-income housing. 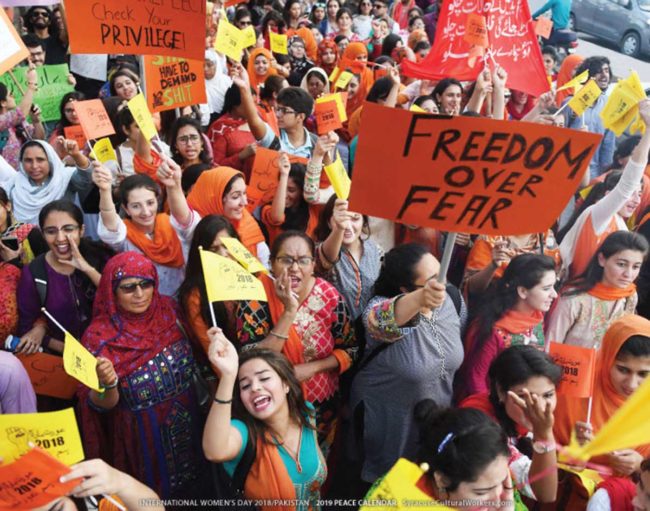 An aerial shot of a celebration and demonstration in Pakistan for International Woman’s Day. (Provided by Syracuse Cultural Workers)

Other illustrations show different approaches to utilizing artwork. For March, a sprawling image of a 2018 International Women’s Day demonstration in Pakistan depicts dozens of participants marching forward. The illustration for September features a closely cropped photo focusing largely on five high school students in its foreground. They took part in the March for Our Lives demonstration in Washington, D.C.; it was organized after 17 students were killed at a high school in Parkland, Florida.

Hal Cameron’s mixed-media piece is showcased on the November page, along with the headline “Asonamakewin Passing Language Along.” The artwork, which shows an indigenous woman interacting with a child, symbolizes the teaching of traditional languages, some of which are spoken by just a couple of hundred people. It also communicates a link between language and culture.

The 2019 calendar, in a 14-by-11 wall format, is distributed locally and to independent bookstores, food co-ops and community centers around the country. It costs $15.95 and is available at the Syracuse Cultural Workers storefront, 400 Lodi St. That venue is open Mondays through Fridays, 9 a.m. to 6 p.m., and Saturdays, 11 a.m. to 5 p.m.