It’s the hottest ticket in town.

Director Michael Barakiva started the Syracuse Stage season last September with his stylishly entertaining revival of Blithe Spirit at the Archbold Theater. Now he closes the season at next door’s Storch Theater with the Syracuse University Drama Department’s rousing production of Spring Awakening, running through May 11. Barakiva has even more style to burn in this impressive mounting, flanked by a passel of talented students who give the director everything they’ve got. And they have to, because this rock musical about troublesome teen-age sexual awakenings in 19th-century Germany isn’t exactly a Sunday drive through wine country.

The winner of eight Tony Awards in 2007, Spring Awakening is composer Duncan Sheik and lyricist Steven Sater’s adaptation of Frank Wedekind’s 1891 German play, which was so overstuffed with social taboos (think suicide and masturbation) that the show was often banned in Deutschland. The musical opens with the song “Mama Who Bore Me,” as young Wendla (played by Delphi Borich) –so virginal, so innocent– asks her mother (Celia Madeoy) about the facts of life. But the flustered mom cops out about copulation in a scene that draws laughs from the audience (“You have to love a man with all your heart” is the maternal wisdom), yet will later lead to dramatic repercussions.

Wendla will inevitably embark on a relationship with Melchior (Brady Richards), a hunky atheist who is more hip to hayloft humping, although he is still an emotional babe in the woods. Early on, Melchior, sometimes nicknamed Melky, assures his buddy Moritz (Ethan Butler) that wet dreams are part of an adolescent’s coming of age, yet that’s just the tip of an unraveling subplot that also entails scholastic skullduggery and contemplations about ending it all.

Moritz’s woes dovetail with the plight of sultry Ilse (Ana Marcu), his former childhood pal and now a village outcast who hangs with a bohemian enclave. Remarking about how one artist employed her body as a canvas for his paintbrush, Ilse has one of the show’s best lines: “That’s men: If they can’t stick you with one thing, they’ll stick you with another.”

SU Drama’s students are in the early 20-something range, close enough in years to incarnate their slightly younger characters, as they rail against the social oppression of that time. Sure, they wear 19th-century togs (designed by costumers Maria Marrero and Simon Brett), but audiences will quickly relate to their plot situations, especially when the cast members whip out microphones and launch into belt-em-out mode to express their characters’ swelling angst, notably in the rocking manifesto “Totally Fucked.” 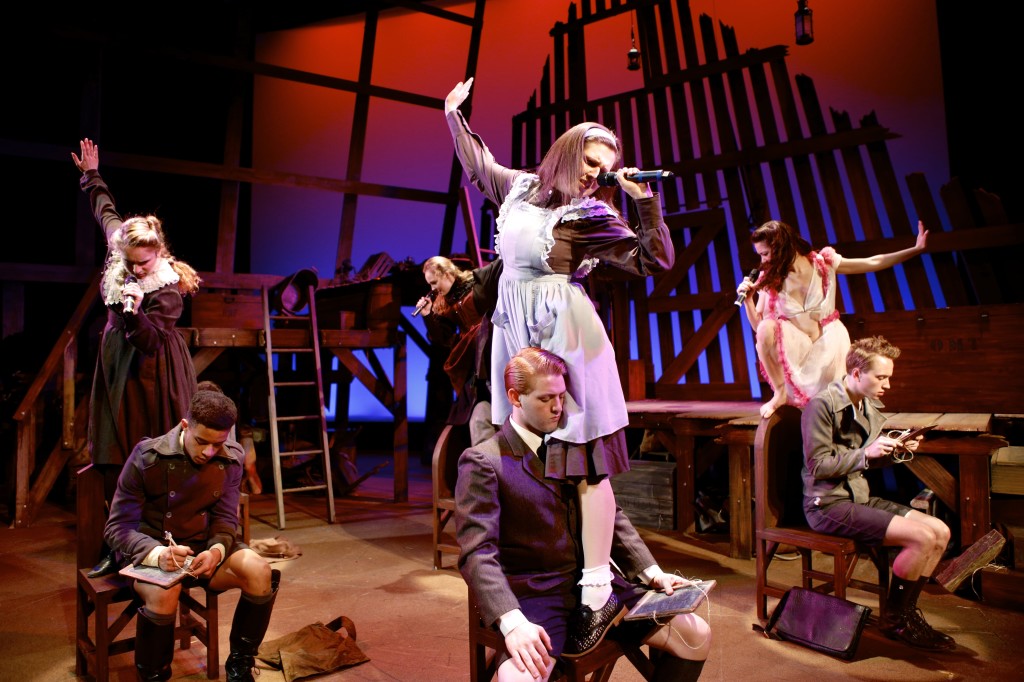 Delphi Borich manages to transcend the sometimes jaw-dropping naivete of her Wendla, making her always believable — even when she asks Melchior to whip her with a switch, so that she can fathom the unbearable pain that her girlfriend experienced at the hands of her abusive father. Brady Richards stresses Melchior’s guileless nature in that scene, which paves the way for the first act’s climax as the couple consummate their passion, a complex, disturbing scene that director Barakiva stages with careful nuances.

Yet Spring Awakening is more than just a show about loins in overdrive, even as it boasts perhaps the first mimed circle jerk in local theater history. The cast members, for instance, appear in modern dress for the final number, “The Song of Purple Summer,” to emphasize the timeless universality of their youthful characters’ 123-year-old adolescent yearnings. Brian Cimmet’s punchy musical direction and the throbbing choreography of Andrea Leigh-Smith likewise accompany the provocative alt-rock soundscape.

Aside from the students acting their hearts out, adult players Joseph Whelan and Celia Madeoy flesh out a roster of supporting characters. Whelan’s roles are mostly variations of meanies, from abusive dads to stern headmasters, yet he manages to find some defining moment for each part. Madeoy shows her considerable range through a half-dozen bits, from Wendla’s mom to a monocle-wearing school leader to, most memorably, a piano teacher who heaves her décolletage toward a student. In one dazzling segue that emphasizes this musical’s in-your-face theatricality, Whelan and Madeoy play grieving parents at a funeral, then shift gears and costumes just seconds later to portray a pair of scholastic scoundrels.

It seems unlikely that other theater groups in the area would be capable of properly casting this show with the age-required performers without it resembling the Bowery Boys meet Grease. So catch SU Drama’s smashing Spring Awakening while you can: It’s the hottest ticket in town.