Forget Henry Fonda. The 1981 film version of On Golden Pond was the much-loved Fonda’s last appearance, for which he won an Oscar. No matter how the dialogue made him sound crusty or abrasive, Fonda–Young Man Lincoln, heroic Juror 8 in Twelve Angry Men–was still Fonda, and we were prepared to love him.

Two years before the movie, however, playwright Ernest Thompson, a talented one-time wonder, produced a prize-winning play in which bitter but ironic protagonist Norman Thayer Jr. shrinks from facing up to the emptiness he feels. As the show mounted by Appleseed Productions (running through May 11) demonstrates, Norman’s humor is often mean. He’s not giving much love and not seeking it, either.

The movie tended toward sentiment, in part because it was a unique reconciliation vehicle for Papa Fonda and his daughter Jane. On stage, however, the semi-estranged daughter Chelsea (Joleene DesRosiers Moody) takes a smaller if still critical role. Here the more important relationship is between sourpuss Norman (Tom Minion) and his rescuing wife Ethel (Anne Fitzgerald). Emotion, when it appears, is nuanced, coded and understated. Although neither religion nor church are ever mentioned, the Thayers are Protestant-like characters in an A.R. Gurney comedy. Their deep feelings are rarely so vulgar as to be displayed prominently.

Early on Ethel announces that this is the couple’s 46th summer at a rustic camp named Golden Pond (portentous symbolism) in Maine, to which Norman snorts, “And probably my last.” He’s nearing his 80th birthday and bridles at being called “middle-aged.” In a monologue, Norman proudly tells us he is a professor of English emeritus from the Ivy League University of Pennsylvania. Significantly, he never displays his erudition with quotes from Shakespeare or Frost, nor does he appear to be at work on an uncompleted monograph. Instead, he dawdles over time-passers like Parcheesi or Monopoly. No diversion is too trifling to allow Norman to avoid facing the fact that his memory is slipping. 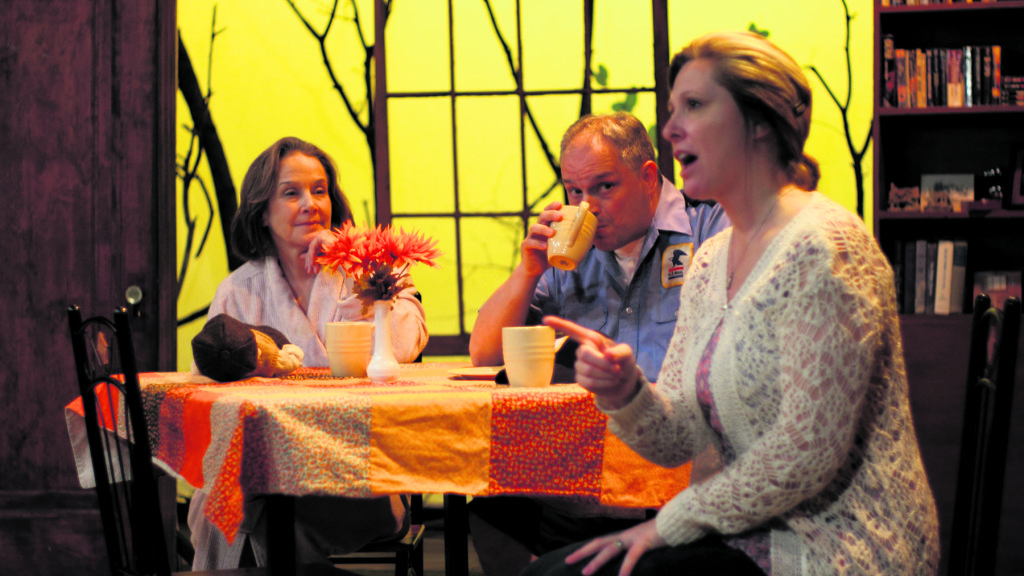 Then the mail arrives. Mailman Charlie Martin (Robb Sharpe) not only delivers letters but good-naturedly churns up memories. His high spirits make him oblivious to Norman’s parries and allow him to shrug off the hopelessness of his unrequited love for absent daughter Chelsea. Through Charlie we also learn that Chelsea is divorced, childless and somewhat estranged from her father, whose birthday she’s coming to celebrate. Chelsea brings with her a new beau, Bill Ray (Nat Dunn), who expects to sleep with her without benefit of wedding bells, as well as Bill’s smart-aleck, reluctant son Billy (Jared Dunn). Not a promising weekend.

On the surface little seems to be happening. Thompson’s strength as a playwright is to pack payloads of emotion into casual conversation. When Chelsea, trying make nice, says, “It just seems like we’ve been mad at each other for so long,” Norman interrupts with, “I don’t think we were mad; I just thought we didn’t like each other.”

Young Billy may be both eager and snotty, but Norman will rebuff either. Billy: “So, I heard you turned 80 today.” Norman: “Is that what you heard?” Billy: “Yeah, man, that’s really old.” Norman: “You should meet my father.” Billy: “Is he still alive?” Norman: “No, but you should meet him.”

Except that we are all mortals, and Norman senses his coming end, so we would have little reason to pin any emotion on him if it were not for Ethel’s steadfast love. She slaps Chelsea when the daughter insults him with the ironic defense, “He’s my son of a bitch.”

Respite from all this estrangement comes from an unexpected source. Cocky young Billy has been shielding a well of needfulness every bit as deep as Norman’s, and it takes abrasion, not sweetness, to uncover it.

(VIDEO: Featuring Ben Fiore and Ryan Burns discussing their process and a sneak peak at one of their original tracks for the On Golden Pond soundtrack, on stage April 25 – May 11, 2014 at Appleseed Productions. Cinematography by Bryan Simcox. Audio Recording/Mixing by Sean Walter)

As with his revival of Mary Chase’s Harvey last year, director C.J. Young revisits a once-popular work, dismissed as sentimental, and proves it to be acerbic and bracing. From Tom Minion he fashions a Norman who refuses to be ingratiating. Always deft at abrasion, Minion lets us see where Norman really is. As Ethel, Fitzgerald, often cast opposite Minion, puts resoluteness into support. Joleene DesRosiers Moody brings a stylish cool to Cheslea, with some of the manner of her former calling as a TV news reporter. Playing the mailman, Robb Sharpe‘s heavy Down East accent could be useful in a Pepperidge Farm commercial.