A successful Broadway comedy of ideas.

Gertrude Stein once said, “All writers want to hear three things: praise, praise and praise.” The four aspiring fiction writers taking advanced instruction from a seasoned pro in Therese Rebeck’s Seminar, through May 18 at Ithaca’s Kitchen Theatre Company, don’t get any of that. Instead, they see their little works of genius trashed, their vanity soiled and their egos pummeled. They plunk down $5,000 each to be humiliated because they are all driven by artistic ambition and expect they will come out ahead at the end. Certainly, the cast and audience will learn plenty with this 100-minute acerbic comedy, but everything’s quite different from what is expected.

Playwright Rebeck can fairly be called “hot,” and two of her works have appeared at Syracuse Stage: the one-woman Bad Dates (March 2006) and Spike Heels (January 2007), a deconstruction of George Bernard Shaw’s Pygmalion. For Seminar, her witty dialogues on creativity have something in common with those in Yasmina Reza’s Art, spoken in the salty language of David Mamet.

The seminar takes place in the comfortable, rent-controlled apartment of one of the students, Kate (Dana Berger), on Manhattan’s Upper West Side. It is not an academic program, like Syracuse University’s crown jewel, although the name of former instructor Tobias Wolff shows up in the dialogue. Given that the instruction is private and admission is tightly restricted, the tyrannical instructor, Leonard (Brian Dykstra), has license to be just as imperious as he wishes. The script says he is a novelist past his prime who is a powerful and influential editor. There’s not enough evidence to prove that Leonard is based on an actual person, but aspiring writers tell your reviewer that seminars like the one depicted do indeed exist.

At first the four students look like types, but that’s Rebeck’s ruse. She’s a skillful craftsperson, and Seminar boasts more than its share of breath-stopping plot twists. Leonard tips us off when he says that writers in their natural state are like feral cats — not nice to each other. It feels as though we’re supposed to identify with hostess Kate, a Bennington girl, Jane Austen fan and incipient feminist, but not so fast. Director Margarett Perry has dressed Berger as Kate far plainer than her lobby photo, which seems to set up some tension with gorgeous Izzy (Alex Sunderhaus), who uses her sexuality as a weapon. Kate is also the fiercest in fighting back at Leonard’s insults. 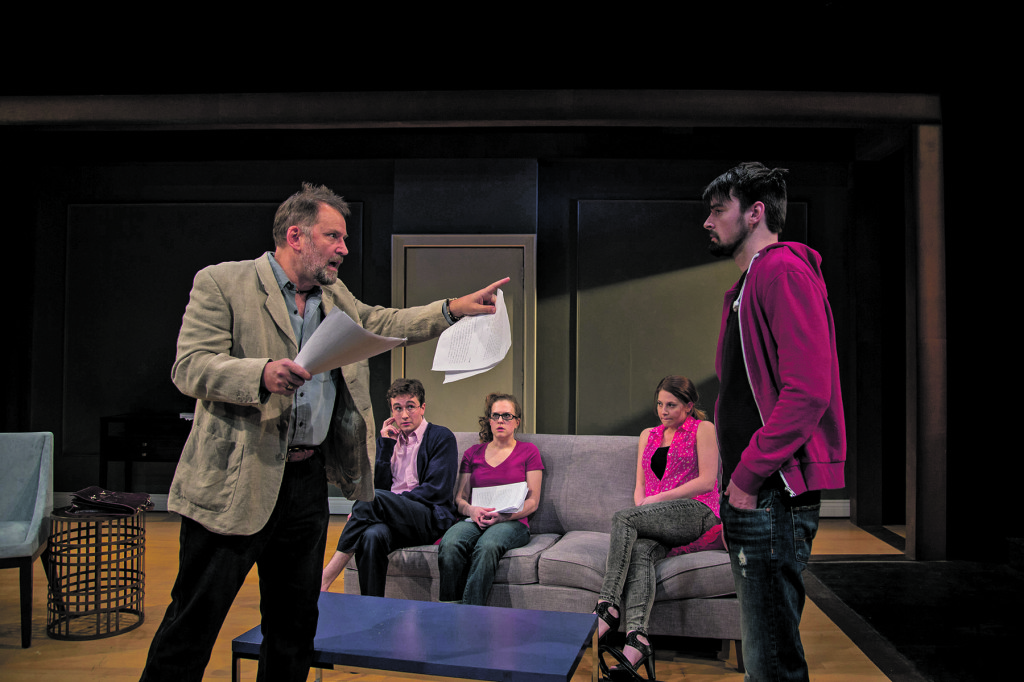 Culture conflict divides the two men. Bespectacled, confident Douglas (Matthew Bretschneider) arrives bearing a famous name, never cited, because he’s part of the family of a famous novelist with Harvard connections. In his opening monologue he prates glibly about literary theory, exteriority and post-post-modernism, which drives klutzy outsider Martin (David McElwee) into a rage. Remotely connected to Kate, Martin mostly visibly belongs to a different class from the others and has a penchant for saying the awkward.

Leonard gives no instruction, other than to talk about his non-literary travels between sessions. He favors bleak war zones like Rwanda and Somalia so that he might encounter “the most terrifying nihilism this planet has to offer.” There is also some despairing talk about whether fiction is a dying art form or if anyone is reading anymore and some heavy knocks against The New Yorker as the arbiter of what’s what.

When Leonard earns his fee it is in attacking the students. Kate says she has been working on her short story for six years, but Leonard rejects it by reading only the words before the semicolon in the first sentence. Dramatically, of course, Rebeck could not have all five players just stand there while Leonard silently plows through page after page, but effectively this means he can make his withering judgments within a minute. Hurt as they are, the students don’t challenge the judgment but instead find ways of approaching from a different direction.

Eventually Leonard is handed a thicker manuscript (let’s leave out who wrote it) that breaches his antagonism. He doesn’t read much more than a sentence, but the emotion begins to roll in a different direction.

Brian Dykstra, long a familiar face at Ithaca’s Kitchen Theatre, recently spent a six-month Broadway run with Tom Hanks in Nora Ephron’s Lucky Guy. His frequent director Perry knows all his buttons: brutal, hilarious and tender. All the students are professional newcomers, with Dana Berger’s multicolored Kate and David McElwee’s profound Martin having the most to do.

Although Seminar is filled with allusions to hip contemporary figures, it is never obscure or esoteric. Indeed, it is that rare thing: a successful Broadway comedy of ideas.

Senior Moments from Appleseed
Fleece and Desist
To Top