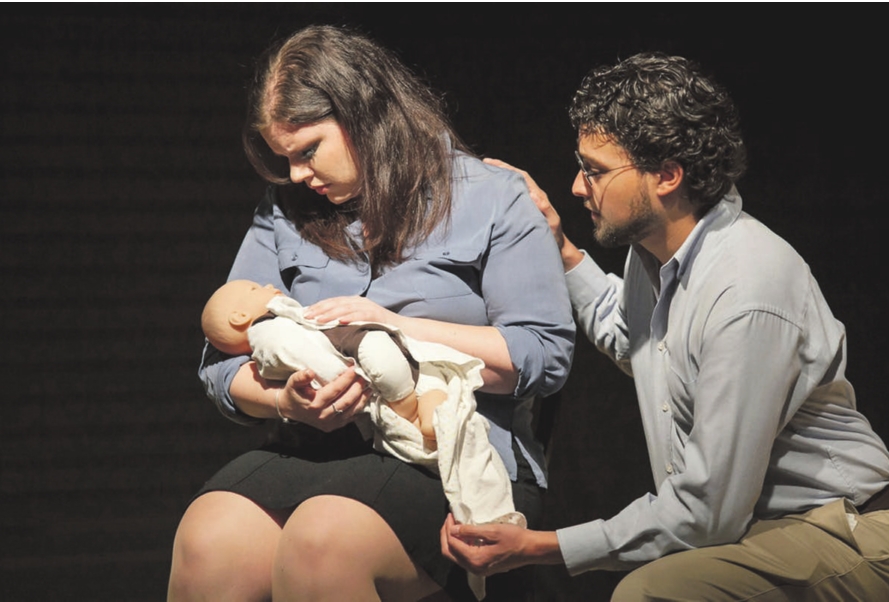 Those phrases “Turn off your cellphone” and “Unwrap your candy” are now repeated so often at the beginning of live performances that we barely hear them anymore. And that’s the point of the theatrical anthology Unwrap Your Candy, especially the first of Doug Wright’s four vignettes, a satire on boorish members of the audience.

As we sit at café tables at Central New York Playhouse’s digs in Shoppingtown, the viewer pivots around to the back of the hall where the lighting directs our eyes to the offenders sitting behind the rest of us. One is a snorer, soundly, if loudly, asleep. Taped voice-overs for the others remind us their minds are directed anywhere, such as the mall or the operating room. No, the author does not have their complete attention but the remaining three vignettes in Unwrap Your Candy are filled with snares for unwary viewers.

Playwright Wright has received plenty of acclaim, but he’s still not a household name. His play on the Marquis de Sade was turned into the little-seen movie Quills (2000) with Geoffrey Rush. The Pulitzer Prize-winning I Am My Own Wife appeared at Ithaca’s Hangar Theatre in June 2005. And in March, Rarely Done produced his book for Grey Gardens: The Musical. None of those is preparation for what comes here.

The remaining three items in Unwrap Your Candy feel like an extended homage to Rod Serling’s The Twilight Zone with a dash of Roald Dahl’s vinegar. Each is linked, one just barely, on the theme of parents and children, and two deny the laws of physics in favor of metaphysics. None of the three is preachy, but as with The Twilight Zone you’re invited to take something away at the end. And in thinking about them, the word “exploitation” comes readily to mind.

The first of these, Lot 13: The Bone Violin, while expressionistic, puts its meaning clearly on the surface. Under harsh lighting, five characters stand in place at the back of the theater, where the candy-unwrappers were. Under Christopher Best’s direction, four of them never speak to each other, only to us. They speak of a stupendously gifted child prodigy violinist, whom the worshiping mother (Gina Fortino) calls a “unicorn.” Although the uncomprehending father (James Uva) asks nothing of the child, two professionals—a geneticist (Jody Agostinelli) and a music scholar (William Edward White)—see their opportunities and take them. The geneticist is the colder of the two, but the scholar the more self-inflating.

Given the pretentiousness of the scholar, not a musician himself, one suspects Wright is also lobbing darts at critics who aggrandize themselves in reviewing plays. At the end everyone has so commodified the kid that he has become an item for sale on the auction block.

The middle drama, Wildwood Park, initially looks like the most conventional and realistic of the three: Mr. Simian (Nathan Faudree) is looking through a suburban house with a real estate agent, Ms. Havilland (Sharon Sorkin). Wright’s dialogue is deliberately misleading at first, with much blather about room size and bedrooms. Gradually we realize that the insinuating Mr. Simian is trying to drive the dialogue, although the competent professional Ms. Havilland has all the information.

Tension rises over the issue of a reduction in the price of a property because it has been associated with a horrible child murder whose perpetrator has not been identified. That the buyer might know more about what happened than the sales rep is the Rod Serling-esque element, but the discomfort-making power play between the genders, well handled by director Heather Roach, makes Wildwood Park feel like a oneact from August Strindberg.

Director Roach has cast two strong players with building reputations for these subtle and demanding roles. On the scene little more than a year, Sorkin impresses at every outing, most notably in the Elizabeth Taylor role in Rarely Done’s Suddenly, Last Summer (March). And Faudree took a step ahead of the crowd as the lead in the Syracuse political comedy film King Lee.

The final item, Baby Talk, directed by Justin Polly, complements the themes of the first two but adds big dollops of raucous laughter. The play is narrated by an uncomprehending psychiatrist (Steve Rowlands), another sign that Wright is distrustful of professional know-it-alls. A needful wife, Alice (Kasey McHale), and her supportive husband (Daryl Acevedo), have long looked forward to having a baby. When she gets pregnant she hears the fetus speak from the womb, and after some moanings that sound like a hump-backed whale, his first word is “conundrum.”

Baritone Dan Rowlands growls for the baby while smoking a cigarette and keeping his decanter of Chivas Regal nearby.

The concept is miles ahead of the smartass Bruce Willis baby in director Amy Heckerling’s 1989 movie Look Who’s Talking and sounds more like Rosemary’s Baby Waiting for Birth. How is Alice ever going to cuddle this little bundle of sweetness after they both suffer labor pains?

Dustin Czarny’s Central New York Playhouse is becoming a company where many voices may speak. The dark, edgy fare of Doug Wright’s Unwrap Your Candy is like a return to the glory days of Contemporary Theatre of Syracuse.

This production runs through Saturday, Aug. 24.