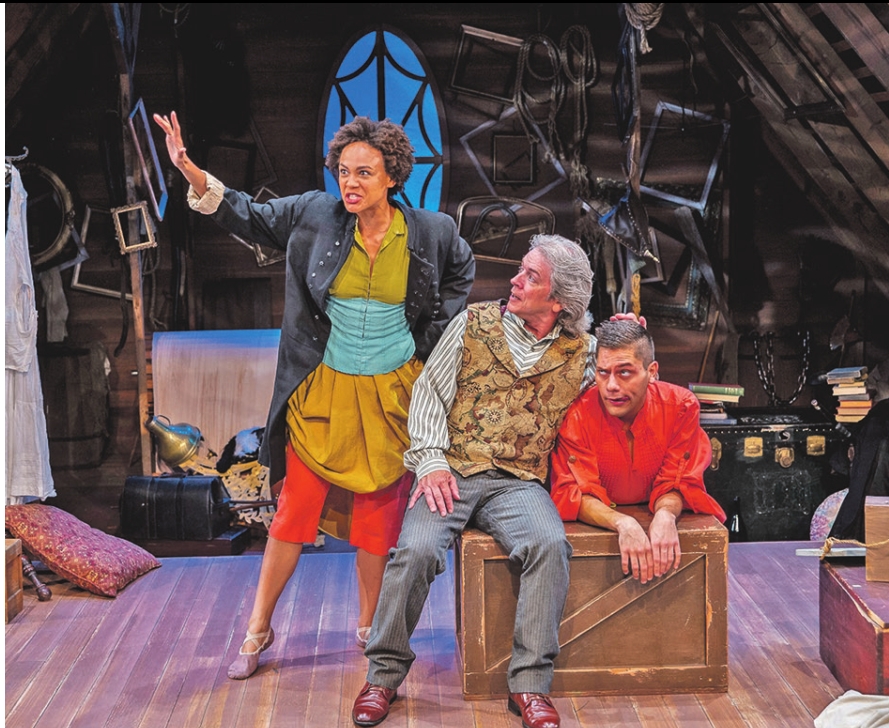 Shipwrecked! An Entertainment: The Amazing Adventures of Louis de Rougemont

It may be the area premiere of a play with an unfamiliar title about a guy most of us have not heard of, but most audiences will arrive at Cortland Repertory Theatre ready for the fun and revelations about to appear. The marquee-defying title can be repeated in full only once: Shipwrecked! An Entertainment: The Amazing Adventures of Louis de Rougemont (As Told By Himself).

We can trust the talents of Pulitzer Prize-winning playwright Donald Margulies (Dinner with Friends, Collected Stories) often concerned with themes of perception and credibility. He is straying far from his usual beat on Manhattan’s upper west side with a lengthy title that sounds like something from Victorian vaudeville. Make no mistake, the date of Shipwrecked! might be a century old and the setting exotic, but Margulies is also thinking about the contemporary scene.

The name “Louis de Rougemont” was a nom-de-plume taken by Swiss-born Henri Grin (1847-1921), who flourished in the London penny press of the 1890s telling tales of wild adventure in distant lands. He was a breathless success at what he did. Writing for the World Wide Magazine, he singlehandedly raised circulation to a million. Tales rolled forth of life in the South Pacific, living among the Australian Aborigines, searching for pearls and gold in New Guinea, riding giant turtles, seeing flying wombats and that hair-raising shipwreck. Tales like these are what Othello told in seducing Desdemona.

In the Cortland Repertory staging by prize-winning director Bill Kincaid, what we see resembles Mark Brown’s adaptation of Jules Verne’s Around the World in 80 Days, produced twice locally, at Syracuse Stage (September 2006) and Le Moyne College (April 2012). Here the laughs are just as frequent, and the story is easier to follow.

Scenic designer Jason Bolen’s stationary set appears to be an attic filled with rare collectibles, and action swirls around it. At the center is de Rougemont himself, played by local favorite Kim Hubbard, a Cortland-born professional with a national reputation. He invites credibility. His long locks are grayer than we remember, and for a man of middle stature, he projects a dignified mien.

The richness and expressiveness of Hubbard’s vocal delivery implies he would still have provoked excitement by delivering the entire text as a recorded book All the other figures in the story, from dogs to queens, are played by four younger, versatile actors. The two narrators, for example, Coleman Hemsath and Avery Sobczak, take care of the back story as well as the more extravagant claims. Playing as many as a dozen roles are willowy, ballerina-like Monique St. Cyr and wide-jawed Justin Charles. We’re suffering no gender or species typecasting here. When we first see actress St. Cyr, she’s de Rougemont’s long-suffering and faithful mother back in London, but moments later she has become the cockney Captain Jensen. Actor Charles has more fun leaping from de Rougemont’s loyal hound Bruno to Queen Victoria.

Part of the attraction of producing Shipwrecked! is in seeing how it pits human, live talent against the computer-assisted mechanical illusions of the cinema. Not only the promised wreck itself, but before that the attack of the octopus which, along with being fun, produces some of that dramatic frisson that storyteller de Rougemont got from his original readers.

Lighting designer Greg Solomon and sound designer Seth Asa Sengel, along with properties designer Lisa Guild, very much shape this action and contribute every bit as much to how the whole thing works as do the performers. Shipwrecked! runs a bit over 90 minutes as a long one-act, yet the tension never flags.

All that rhetoric in the title, like “Amazing” and “As Told By . . .,” are what tie Shipwrecked! to the issues in the present. Consider the appeal of reality television, beginning with Survivor in May 2000. Contestants are actual people plucked from life with traceable addresses and hometowns, then they are thrust into exotic and presumably dangerous corners of the world, like Borneo and Guatemala. As with de Rougemont’s World Wide Magazine, millions were soon addicted to each succeeding episode. Television, though, allows for more voyeurism, as the camera eavesdrops on supposed candid conversations, and female participants begin to shed some of their garments. De Rougemont had a more discreet sex life, a wife and two children.

Doubters will tell you that participants in Survivor can shower every night and sleep on clean sheets. De Rougemont’s tall tales had a shorter run in life, but a hundred years later, they leave a sweeter taste.

This production runs through Saturday, Aug. 24.