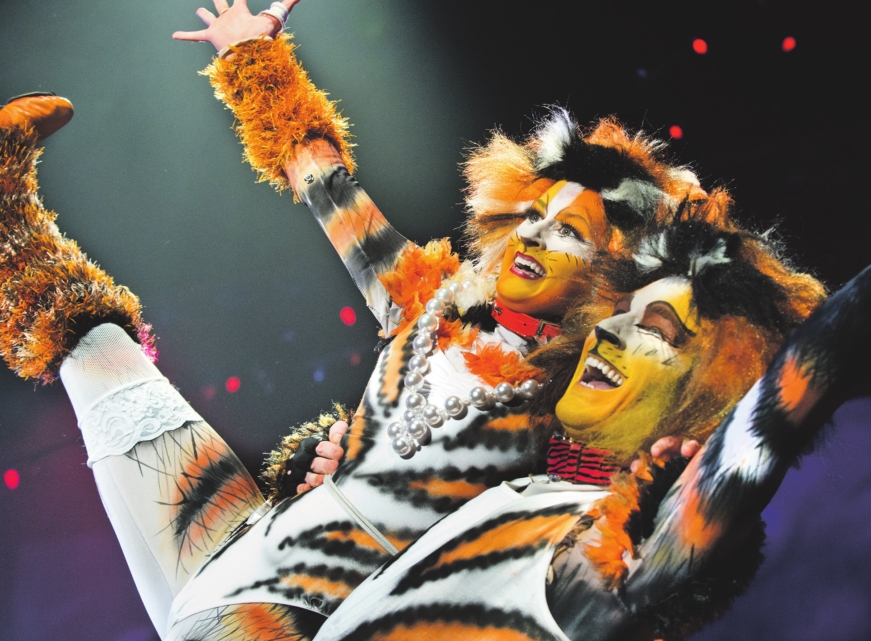 Since its opening in 1981, the show has won a gazillion awards, been translated into Urdu and Tlingit and been seen at least once by about as many people as are currently on Facebook. Unlike, say, The Sound of Music, it does not wear out, however. Part of the reason is that you don’t get to see it every day. It’s such a forbidding challenge to put on: the difficulty of the dancing and singing numbers, the expense of the elaborate costumes, all that. Companies know it will be strong box office, but they’re reluctant to take it on regularly.

But Cats’ appeal is more than rarity of appearance. Most audiences today have already seen it once, or at least know what they’re getting into. Still, even after 32 years the show is filled with unexplained wonder and surprise. Audiences can never quite grasp every threat of it.

Evidence is everywhere that Auburn’s Merry-Go-Round Playhouse sees Cats as the major effort of the season. Celebrity performers are uncommon on this beat, but the casting of 1980s-era pop diva Taylor Dayne (“Tell It To My Heart”) brings more than an illustrious name. “Memory,” heard in both in the first and second acts, is a bit removed from Dayne’s usual repertory. Not only does she bring the power and expressiveness required but all the dramatic enhancement as well.

Dayne’s shunned outcast Grizabella is at first hesitant and halting, and upon return, in full bravura. The body set of guilt and rejection are necessary to the setting. “Memory” is not only one of the greatest show tunes of the last generation, but one of the few that calls forth goose flesh upon delivery, which is what Dayne delivers. She has not been interviewed by the Syracuse New Times, but we can speculate Dayne is in Auburn this summer for the sheer pleasure of pulling this off.

Elsewhere, the production boasts a fusion of national and local talent. Director-choreographer Jacob Brent has been a specialist in Cats and played and danced the role of Mr. Mistoffelees, the short, all-black tomcat in both London and New York City. Other members of the cast, too many to name, have been appearing in different productions around the country. Thus, the difficult moves, such as high kicks with feet above the head, can look effortless. Unlike other productions this reviewer as seen, however, big production numbers like “The Naming of Cats” include tap interludes.

Heading the local talent are costumer Garth Dunbar, set designer Robert John Andrusko, lighting designer Dan Ozminkowski and music director Jeff Theiss. This Cats retains the color identity for different players: Victoria is all-white, for example, while Mungojerrie and Rumpleteazer have tiger stripes. Yet each is slightly different from what we remember from the last time, notably with a furrier head. Give credit here also to designer Jason Flanders for hair and makeup—lots of it. We’re still in an alley behind a theater that you can almost smell. And Theiss, usually head in charge of smaller productions like Altar Boyz, makes his 11 players sound like a rock symphony orchestra.

Based on rare light verse by Nobel Prize-winning poet T.S. Eliot, a highbrow Christian apologist, Cats weaves a subtle faith-based allegory, in which one of the key personages is named Old Deuteronomy (authoritative Patrick Mellen), named for an Old Testament prophet. A sinner, Grizabella, is redeemed in the second act, but the show is not then over. Overlaying all this is Lloyd Webber’s familiar obsession with show business, with parodies of familiar forms as well as spoofs of recognizable figures. Each individual number, a ballet with words, is a kind of peek-a-boo game to see if we know who or what is being referenced.

To make this easier, among the earliest is the rock-themed Rum Tum Tugger (Adam Ryan Tackett), who is riffing on the younger Mick Jagger, who had already been linked to Elvis Presley. The striped duo of Mungojerrie (Will Porter) and Rumpleteazer (Amanda LaMotte) are reviving vaudeville. Macavity, the Mystery Cat (Jonathan Tylicki), is one of those gentlemanly cat burglars of genteel crime fiction as well as a kind of disappearing Houdini. Bustopher Jones (Christopher E. Sidoli) is a kind of English clubman and possibly a spoof of poet Eliot himself, who favored privileged company and did not go for that starving-in-a garret routine.

Unusual in any production of Cats, Sidoli does triple duty, appearing shortly after the role of Bustopher as Gus the theater cat. This part was originally written for Sir John Mills, then a living legend but a non-singer. He relives an oral history that could not have been known in a single lifetime, feline or human. Not done yet, Sidoli also reappears as the full-throated Growltiger, kind of an emcee for the action in the last portion of the second act.

Because so many of the numbers exist discretely from one another, many players dominate the spotlight for short periods. Striking among them are Andrew DiConcetto as Skimbleshanks in “The Railway Train,” Josh Walden as Munkustrap, Lucy Horton as Jellylorum and Grid dlebone, Jessica Dillan as Demeter, and Justin Henry as Alonzo.

The Wright Stuff
A Close Shavian Experience
To Top