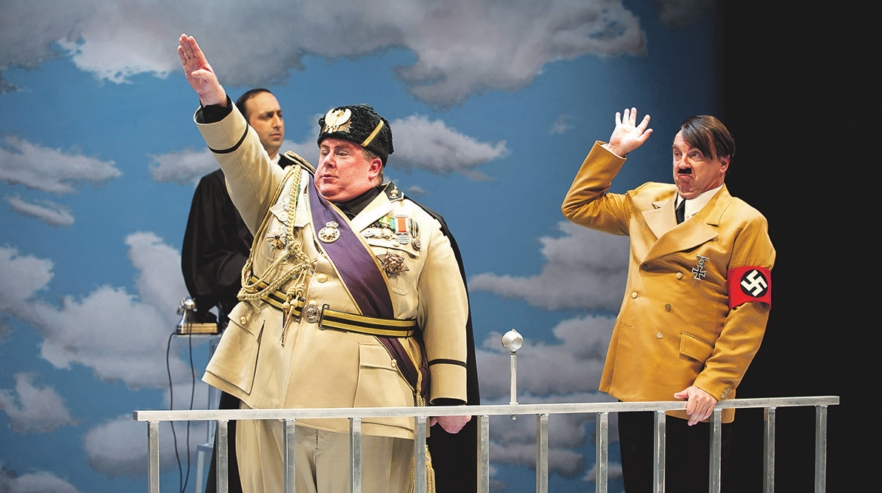 In the 10 years that artistic director Jackie Maxwell has been running the Shaw Festival, at Niagara-on-the- Lake in Ontario, Canada, the shows have become less British and less Edwardian.

In the 10 years that artistic director Jackie Maxwell has been running the Shaw Festival, at Niagara-on-the- Lake in Ontario, Canada, the shows have become less British and less Edwardian. Born in Northern Ireland, Maxwell also smiles on American culture and makes sure that the Irish as well as women playwrights and women’s themes are given their due.

This season’s two musicals are American: Guys and Dolls and the Craig Lucas-Adam Guettel Light in the Piazza. Few other festivals would program the intellectually demanding Faith Healer by Ireland’s top playwright Brian Friel or the one-acts A Wife for a Life by Eugene O’Neill and Trifles by early-20th Century American Susan Glaspell. Enchanted April, adapted from Elizabeth von Arnim’s book, is top-grade chick lit, and George Bernard Shaw himself is represented by one of his most enduring comedies, Major Barbara.

Shedding the slur that the festival is “fine art for tourists,” Maxwell also booked Tom Stoppard’s ultra-cerebral Arcadia. Don’t worry too much about that one, though: The entire run was sold out before it opened.

Plenty of tickets are still available, however, because there are a total of 10 productions on four stages, and the season runs until the end of October. On a recent visit, the Syracuse New Times examined a trio of productions. Two are dazzlers and display the festival at its strongest, and the third is a curio that you’ll be able to see only this once.

Lady Windemere’s Fan, subtitled A Play About a Good Woman (through Oct. 19 at the 869-seat Festival Theatre, 10 Queen’s Parade), is the Oscar Wilde comedy chock-full of some of his best one-liners: “I can resist everything except temptation,” or ”A cynic is someone who knows the price of everything and the value of nothing.” As with all famous lines from plays, like “Bah, humbug,” or “My kingdom for a horse,” it takes a superlative actor to make them sound as though we’ve never heard them before. Gray Powell, who plays Lord Darlington, the Wilde mouthpiece, underplays them and holds back on the flourish, as if Darlington had just thought them up. Other performers who get the most zing from the zingers are company regulars such as Corrine Koslo as the crusty Duchess of Berwick, Jim Mezon as the somewhat addled Lord Lorton and Sharry Flett as the incisive Lady Plymdale.

Around all the golden dialogue lies a melodrama of mixed signals. Does Lord Windemere (Martin Happer) have an improper relationship with a scarlet-appearing older woman, Mrs. Erlynne (Tara Rosling)? Is the loss of the titled fan by Lady Windemere (Marla McLean) going to jeopardize her marriage and reputation?

Other productions, especially those on television or in regional theater productions, have let the melodrama go slack in favor of the comedy. A chief asset of ace director Peter Hinton is the evocative use of space with nearly cinematic depth to crowd scenes, where upstage may have a contrasting tone to what is more intimate downstage.

As with the most posh productions in the Festival Theatre, Teresa Przybylski’s sets and William Schmuck’s costumes are supposed to knock your eyes out with period splendor. Louise Guinand’s lighting ensures that they look like 100-yearold paintings that you can’t quite name.

Act III, right after intermission, works particularly well. We are in Lord Darlington’s dark rooms with a fireplace at the end, and the relaxing men, scattered around the room, pronounce their Wildean epigrams from a distance from one another with well-timed delays, all for maximum effect.

The major discovery of this season is Somerset Maugham’s little-seen dark comedy Our Betters (through Oct. 27 at the 328-seat Royal George Theatre, 85 Queen St.), which opened in New York City in 1917, and London in 1921. A good reason to revive now is that it’s an unintended commentary on American-British relations, much like the PBS hit, Downton Abbey. Wrongly classed as a middlebrow, the young Maugham (when he preferred the stage to prose fiction) can easily be compared with Wilde for brilliant dialogue and Shaw for social consciousness.

Never entirely forgotten, Our Betters was filmed by George Cukor with Constance Bennett in 1932, and Kathleen Turner revived it as a vehicle for herself at the Chichester Festival in 1997.

The link to Downton Abbey is that we have an American heiress who has snared herself a titled Englishman so that she is now known as Lady Grayston (Claire Jullien) or, more plainly, Pearl. Social historians record more than 100 wealthy American women followed this path, and high society chronicler Edith Wharton wrote about them in an unfinished novel, The Buccaneers (also dramatized on PBS’ Masterpiece Theatre, 1995).

The American women and the English men have made bargains, and neither side is composed only of dupes or exploiters. The men need the dollars for simple reasons, and the women cherish the titles because often (uh-oh) they’ve gone to England because they weren’t doing so well on the Yankee side.

At the beginning of the action Lady Grayston dominates her drawing room in ultra-fashionable Mayfair (created by set designer Ken MacDonald), entertaining guests of both sexes. Lord Grayston has taken the dollars and gone his own way. They are never in the same house at the same time.

Two of Pearl’s female visitors have followed her route to social status but in different countries, and unhappily. Princess Della Cercola (Catherine McGregor), or Flora, went to Italy where instead of sunshine she found cold and inhospitable castles. Pearl’s company is her best cheer now. In France Duchesse De Surennes (Laurie Paton), also called Minnie, was able to retain her title after the death of her husband and still has the bucks, but other things are not going as well. Her British gigolo, Tony Paxton (Charlie Gallant), is getting restive and thinking about how much he might enjoy the company of a younger, if less affluent, babe.

Inadvertently exposing that things are not going so well is Pearl’s younger sister Bessie Saunders (Julia Course), who has reached marriageable age. Things did not work out with an earnest American beau, Fleming Harvey (Wade Bogert- O’Brien), who talks like the playwright’s mouthpiece. Pearl finds him insufferably American; when he utters a flat-footed Yankeeism, “Gee,” she advises he insert something more British and stylish, like “By Jove.” Pearl would prefer Bessie make nice with Lord Bleane (Ben Sanders), a perfectly blameless if boring hanger-on.

Pearl’s own taste in men tends toward the capricious. She encourages the overly familiar Arthur Fenwick (Lorne Kennedy), who calls her “girly,” to pull off her shoes to massage her feet before running his fingertips under her skirt. “Lose me,” he threatens, “and you’ll only be left with your husband.”

Under the direction of comic playwright Morris Panych, Our Betters is nasty good fun. And actress Claire Jullien turns Pearl into a comic anticipation of the predatory Regina in Lillian Hellman’s The Little Foxes.

John Murrell’s adaptation of Shaw’s Geneva (1938), titled Peace in Our Times: A Comedy (through Oct. 12 at the 327-seat Court House Theatre (26 Queen St.), must have been inspired by what another Canadian playwright, Michael Healey, did with On The Rocks. Long thought Shaw’s worst play, the festival did not wish to produce Rocks until Healey the alchemist reversed the order of the acts and turned dross into gold. Rocks filled houses over two seasons, 2010 and 2011.

Geneva, about bringing three contemporary dictators–Mussolini, Hitler and Franco, under figurative names–to trial at the League of Nations, is arguably Shaw’s second-to-the-bottom. Unrevised, it was produced in a short 1988 run in Niagara-on-the-Lake. The 2013 production features Neil Barclay (Il Duce), Ric Reid (Der F�hrer) and Lorne Kennedy (El Generalisimo). Hard as the actors try under Blair Williams’ slapstickish direction, you will notice illuminated watch dials lighting up all over the theater during the last 45 minutes.

Not that there aren’t some laughs.

A formerly air-headed cockney secretary has been turned into a Sarah Palin sound-alike, Liberty Belle Browning (Diana Donnelly), who is joined by a Canadian comic figure, Darcy Middleman (Andrew Bunker), a prairie reactionary nationalist who bleats with an Ottawa Valley accent. Stealing the show is Claire Jullien as a Charo-talking Spanish widow seeking vengeance for her murdered husband. Pulling a pistol out of her purse she bellows that all her people pack weapons. And the Palin character responds, “Us too.”

The end of the U.S. currency advantage and the requirement that all border-crossers have passports slowed Central New York traffic to the Shaw Festival for a few summers. But the incomparable excellence of the company taken as a whole, what you can’t see anywhere else, makes Niagara-on-the-Lake, north of Niagara Falls, one of the choicest destinations in under four hours.

The shows will be performed in repertory, Tuesdays through Sundays, 2 and 8 p.m. Admission is $32 to $110 (Canadian), with discounts for seniors, families, students and groups. Tight accommodations require advance planning. Call (800) 511-SHAW or visit www.shawfest.com for details.