Players fought their “butts” off against No. 1 Florida State

As promised by head coach Scott Shafer, the Syracuse University football players fought their “butts” off against No. 1 Florida State Saturday, Oct. 11,  and held their own in a 38-20 loss at the Carrier Dome.

Now, as the team hits the halfway point of the season, the question is this: Will that kind of effort be enough for the Orange to reach a bowl game for the third consecutive year? 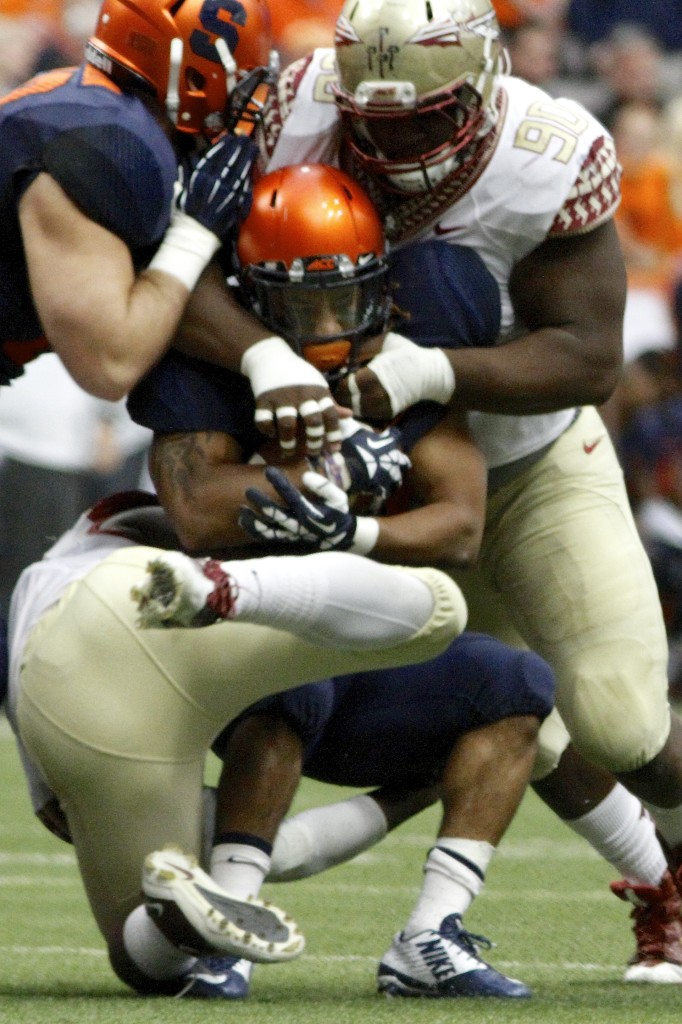 “The No. 1 goal is to go to a bowl game,”
Michael Davis Photo

SU (2-4 overall, 0-2 in the Atlantic Coast Conference) needs to win four of its final six games to qualify for a bowl game. On paper, those six games include one sure win (Saturday at Wake Forest), one sure loss (Oct. 25 at Clemson) and four toss-ups (North Carolina State and Duke at the Dome; Pittsburgh and Boston College on the road).

“The No. 1 goal is to go to a bowl game,” SU guard Sean Hickey said. “We’ve got some tough opponents coming up, but looking at (Florida State), I felt on both sides of the ball we showed some good glimpses of what we’re able to do. We have to be able to capitalize and really re-focus this week and try to get this win against Wake Forest.”

Throwing out Clemson, the combined record of SU’s final five opponents is 3-8 in the ACC and 18-13 overall. So if beating Florida State is like climbing Mount Everest, beating the likes of Wake Forest, N.C. State and Pitt is like climbing Adams Street on the way to the Dome on a snowy day.

“We had a clear chance at beating (Florida State), but we are just moving on to the second half of the season and worrying about Wake Forest and going to a bowl game,” said freshman wide receiver Steve Ishmael, who caught two touchdown passes against the Seminoles. 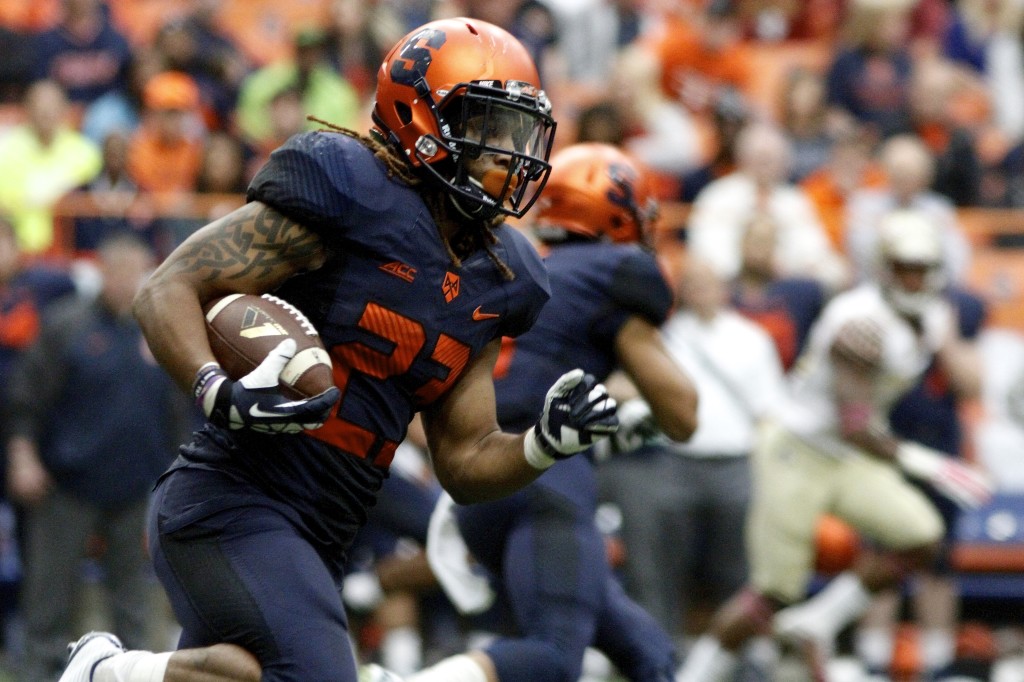 Last week, after an embarrassing 28-6 loss to Louisville at the Dome, it appeared the sky was falling and SU would be lucky to win one more game, let alone four. Starting quarterback Terrel Hunt fractured his left fibula in the Louisville game and was out four to six weeks; quarterbacks coach Tim Lester replaced George McDonald as offensive coordinator in a rare in-season move that smacked of desperation; and big, bad Florida State was coming to town, and most observers expected the Seminoles to repeat last year’s 59-3 smackdown of SU.

But the Orange hung in there and could have it made it really interesting had it scored more than six points out of four trips to the red zone in the first half. So here are three reasons why fans should believe there’s still hope this season:

1. The play of freshman quarterback AJ Long. Making his collegiate debut against the defending national champion, Long acquitted himself quite well by completing 16 of 27 pass attempts for 167 yards with two interceptions and the two touchdowns to Ishmael.

Sophomore quarterback Austin Wilson started against Florida State. He did not play poorly but left the game with what appeared to be a concussion. Even if Wilson is able to play this week, it looks like Long will lead the Orange over the next few weeks – and maybe years.

“Did he make mistakes? Yes,” Shafer said of Long. “But all-in-all, the opportunity to be baptized by fire against No. 1 in the country I thought the kid did a pretty darn good job.”

2. Lester’s play calling. SU has some issues on offense that probably won’t get fixed in a few weeks, but overall there was a better balance and cohesiveness to the offense with Lester running the show.

“We know that we are a good team on the verge of being a great team as far as our offense goes,” Long said. “So, basically, this week is just getting comfortable with each other and realizing that we can play with anybody in the country when we come to the game and we have nothing to lose.”

3. They’ll keep fighting. Shafer doesn’t let a press conference go by without telling reporters that his players will continue to fight their “butts” off. Yes, it’s coachspeak, but it does go a long way. 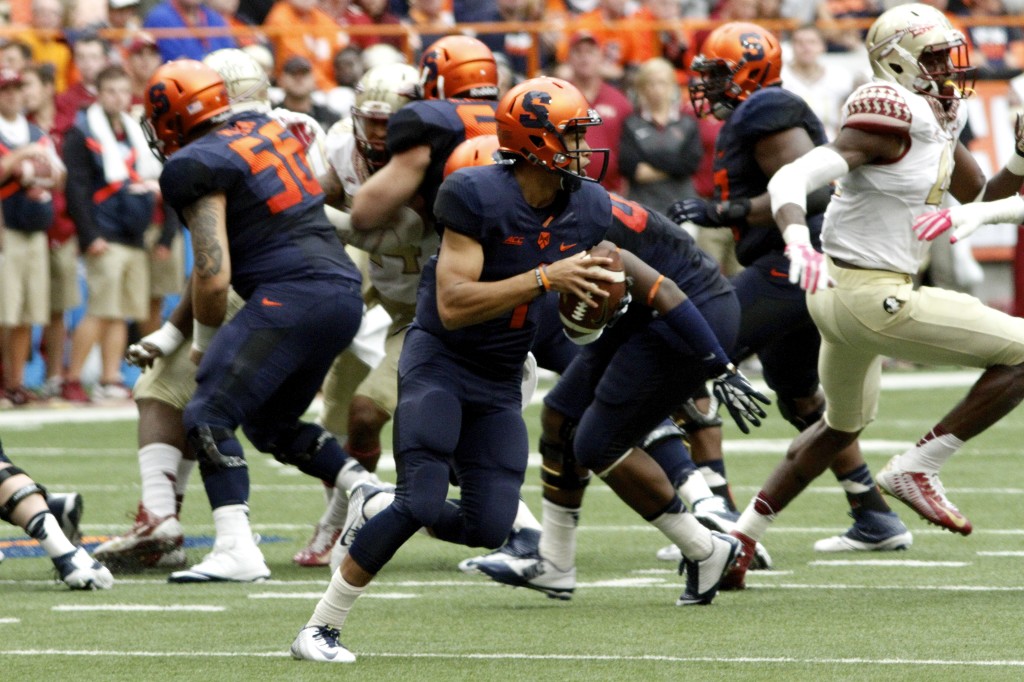 “Nobody cares you had a dozen injuries going into this game, so we have to move forward and find the next guy to step up and bring the team along. That’s what our kids have done a good job of,” Shafer said. “It’s never as good as we want it to be, but I do like the way we’re fighting.”